Spoilers: A Partial Explanation for Netflix's Inexplicable 'The I-Land'

If you’ve read headlines or reviews of Netflix’s series The I-Land, you already know how bad it is. The 0 percent on Rotten Tomatoes, however, hardly does justice to what a colossal, unwatchable embarrassment this series is. You know that scene in Me, Myself, and Irene when Jim Carrey wakes up and realizes his other personality had sex the night before because his urine is split-stream? The I-Land is the pea stains on his wall: The smelly, yellowed, watered-down residue of much better shows and what I can only assume is the creatinine remains of the careers of Kate Bosworth and Alex Pettyfer, a one-time aspiring Sam Worthington who flamed out before he even achieved Jai Courtney status and is now circling the RedBox drain and can’t even manage to survive more than two episodes of the worst streaming series of 2019.

The thing about The I-Land is that you really have to see it to understand how truly terrible it is. Words do not do it justice. But it’s also a test of wills: How many episodes of The I-Land can you suffer before you wake up covered in bile and vomit, a bruise on the back of your head and no memory of the last three hours of your life?

I lasted two episodes. Specifically, I watched the first episode and the last episode. After watching the last episode, I tried to watch the penultimate episode to see if I missed anything important. I tried twice. I nodded off both times before giving up, and I say that as someone who is a resilient enough television viewer that I watched the entire first season of Manifest. Manifest is Breaking Bad compared to The I-Land.

The I-Land is the Movie 43 of streaming series. There’s no explanation for why it exists, or how it came together, and like Movie 43, I suspect no one involved with the series will ever speak publicly about it. The I-Land comes from creator Anthony Salter, who I’m not entirely sure is a real person. This is his only credit, according to IMDb, and he doesn’t appear to have any online footprint whatsoever. However, the writer and director of the series’ first four episodes, Neil LaBute, is real, and someone once so celebrated that well-known actors sought to work with him on purpose. (I once saw a LaBute play in NYC starring Paul Rudd. LaBute, however, hasn’t made anything worthwhile since his American remake of Death at a Funeral and even that is debatable). Still, given the illusions of credibility that LaBute and Bosworth give to The I-Land, it takes a full episode before you stop wondering, “Is this a joke? It has to be a joke, right?”

Folks, it is not a joke.

The I-Land opens with a group of people waking up on a tropical island exactly — as we learn later in the episode — 39 steps apart. They have no memory of how they arrived at the island. In fact, they have no memory of who they are or any knowledge about their past. Their names — or at least, what they call themselves — are stitched into the labels on the back of their shirts. They have no injuries. They play a word association game in an effort to jog their memories. It doesn’t work.

Lacking anything else to do while stranded on a tropical island, a group of them go swimming, but one of the dudes gets attacked by a shark and left for dead (barely alive, he later washes ashore on the beach. The rest of the islanders shrug). Meanwhile, Chase (Natalie Martinez) and Brody (Alex Pettyfer) decide to explore the rest of the beach. They discover a waterfall with fresh water and food, but their good time is ruined when Brody tries to rape Chase. She fights him off and Brody runs back to the group and tries to gaslight her before she returns and informs the others (the old LaBute misogyny flourish!). Soon thereafter, the group sits around and tries to figure how why they’re on the beach and why they washed up onshore exactly 39 steps apart from each other. By using math, they somehow track down the only clue to the island, a sign that says, “Find your way back.” 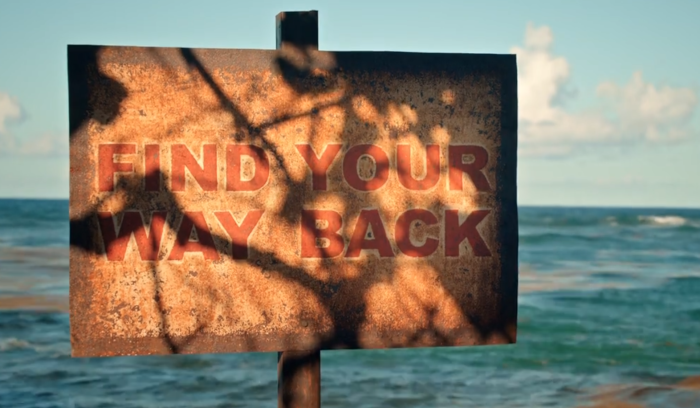 That’s the end of the premiere episode. It’s 42 minutes long. Passing a kidney stone through your retina is more enjoyable.

I waited three days to finally tackle the final episode so that I could give myself some time to recover. It wasn’t long enough. It felt like my brain was still missing an arm, doubly strange since brains do not have appendages. However, I managed to suffer through the final episode. Here are The I-Land spoilers:

The I-Land is an experimental program run by a for-profit prison operated by the corrupt Warden Wells (Bruce McGill). All the prisoners placed on the island are death-row inmates. The 39 steps between each person on the island represents how many steps a death-row inmate takes from their cell to their execution. The island ostensibly is about rehabilitating the death-row prisoners, only most of them ended up killing each other because — despite lacking their memory — their inner nature takes over. Most of the people on the island end up dead.

However, Natalie Martinez’s character, Chase, is pulled off the island once the people in the prison learn that her husband — also on the island — committed the murder for which Chase was on the island. We also learn that Warden Wells tainted the island experiment by placing a handgun on the beach. Warden Wells tries to cover up his crimes and kill Chase but he’s caught in the act by the prison psychologist. One of the twists, in the end, is that he’s placed on the island and greeted by Kate Bosworth’s character when he washes up onshore.

The big twist, however, is this: The people on the island are actually avatars. It’s a simulated experiment. However, if your avatar dies on the island, you die in real life. Before Chase is released from prison, she looks in the mirror and realizes that she’s 25 years older than she appeared to look on the island. The prisoners are made to look the age they were when they went into prison on the island. Chase discovers that she’s been in prison for 25 years for a crime she did not commit. She walks back out into a world that has been ravaged by climate change.

← Spoiler Review: The Best Thing About 'Rambo: Last Blood' Is The Word 'Last' In The Title | 'Law and Order SVU' is 20: Let's Talk Highlights (Mariska Hargitay) and Lowlights (Pablo Schreiber) →