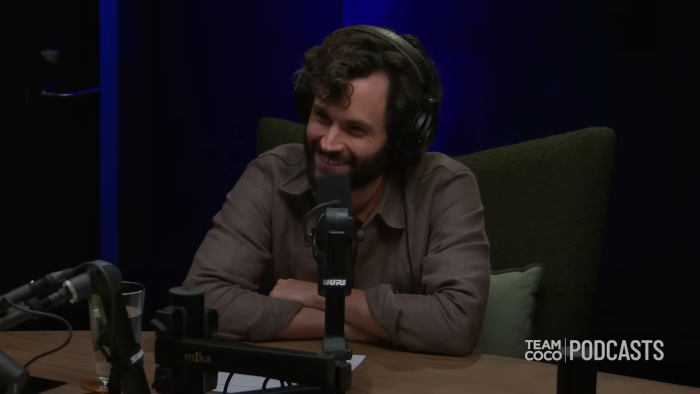 My knowledge of Gossip Girl is limited. There were jokes on 30 Rock that I believe were about the hit CW show, but that’s as far as my knowledge goes. It always seemed like a teenage melodrama to me. I got enough of that from Smallville. Apparently, I was looking at it through the wrong lens. Conan O’Brien loves Gossip Girl. Yes, that Conan O’Brien. I have to say, his reasoning is very compelling.

Conan recently sat down with actor Penn Badgley. I am as familiar with Badgley as I am with Gossip Girl, though that certainly changed after this interview (more on that shortly). Conan is much more familiar with the actor. He spent a good chunk of the opening gushing over Gossip Girl. Conan began watching the show with his kids and they all soon became mega fans.

Hearing a man Conan’s age go on about the show would be surprising if it were anyone else. Despite his penchant for ’60s and ’70s-era television, Conan loving Gossip Girl makes sense. Hearing him describe Badgley’s character, a teenage tycoon I think(?), puts the show in a new light. I had no idea that it involved high school characters acting like C. Montgomery Burns. As Conan has mentioned before, Mr. Burns was his favorite Simpsons character to write for. It all adds up! Conan loves rich jerks! You know, just in a fun way.

I may not be running to Gossip Girl now, but I am officially a Penn Badgley fan. He has a great sense of humor about himself, and he seems incredibly normal for someone who has been acting since before he hit double digits. Add Badgley to the likes of Daniel Radcliffe and Elijah Wood. Actors who should be messed up but somehow emerged as good, regular dudes.

Are you part of a fandom people may be surprised to learn?


← Give Me Fuel, Give Me a Lighter, Give Me 2 Racists on Fire | Brazil's Own January 6th, or South America Is So Exhausting →