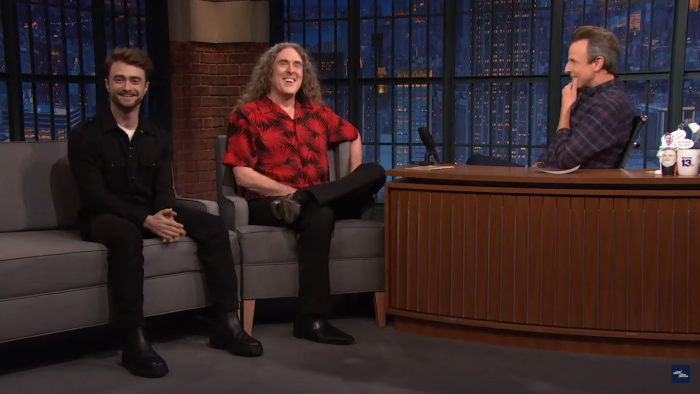 As a lifelong Weird Al fan, I was nervous about the upcoming movie Weird: The Al Yankovic Story. I’m not sure why. I think there was some hesitancy because I didn’t think they could stretch what started as a short Funny or Die video into a full movie. I think I’ll be wrong because Weird Al himself and the star of the film Daniel Radcliffe are having too much fun for this to be a problem.

On a recent episode of Late Night with Seth Meyers, the duo showed up to promote the film. There’s this kind of humble sweetness to them both that is instantly engaging. You can see it when they do interviews on their own, but it’s extra highlighted when they appear together. Their demeanors complement each other in a way that feels so genuine. They seem to have fun just being around each other. It’s infectious.

The movie, as it is described by the two, also sounds incredible. To take a completely unserious man and make a wholly unserious movie about him is an incredible idea. Seth sings its praises, as is his job, but there have been others in the comedy community doing the same. Reviews have been stellar. This thing may be good!

I should learn from this experience. I’ve never doubted Weird Al before, and I won’t do so again. Like Linus and the Great Pumpkin, my devotion will be unflinching from this point forward! All hail Al, and his many creations