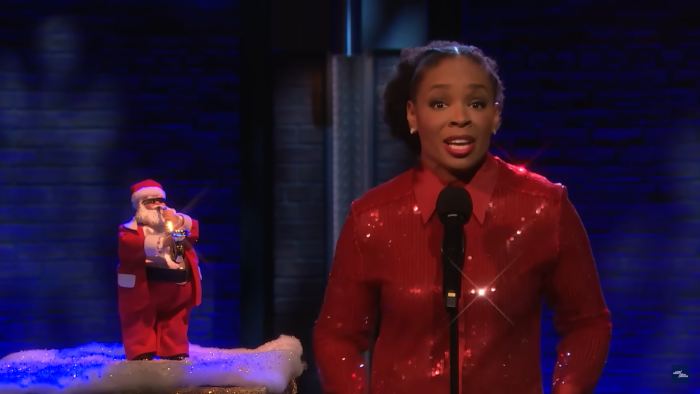 Sometimes you have to trust your gut. If it wasn’t for trusting your gut, Columbus wouldn’t have discovered America (I think). Neil Armstrong wouldn’t have landed on the moon (probably). Philo Farnsworth wouldn’t have created the TV and been portrayed by Jimmi Simpson on Broadway (at least the second part of that is correct). If what I’m saying so far sounds silly or stupid, I’ve got good news for you! We’re only going to get stupider from here on out! Fun stupid!

Amber Ruffin swung by on a recent episode of Late Night with Seth Meyers to sing a Christmas song. The setup for the Christmas song was straightforward. Ruffin was looking for a last-minute Christmas gift. What she finds is a moving and grooving saxophone playing toy Santa. She’s so enamored with it that she takes it home and they bone (that’s what she, quite literally, said). Y’all, I found myself giggling with glee through this entire sketch.

A lesser artist would have done this song with a wink and a nod. They would have played to the camera and leaned into the joke. Amber Ruffin, being one of the funniest people on television, did not choose that route. She takes this song incredibly seriously. You feel the love for this tiny plastic Santa emanate from her very being. Having someone react very seriously to something very silly is always a surefire path to success.

One of the funniest aspects of this bit is the big reveal that comes at the end. Seth Meyers tells the audience that Jenny Hagel, the hilarious head writer of the Amber Ruffin Show, thought this song was too stupid for their show. It’s a funny peak behind the curtain that Amber does not disagree with! That being said, they did have a pretty full card for their Christmas episode. Don’t you worry, I’ll be talking about that hilarious half-hour later this week! More Amber Ruffin for all!