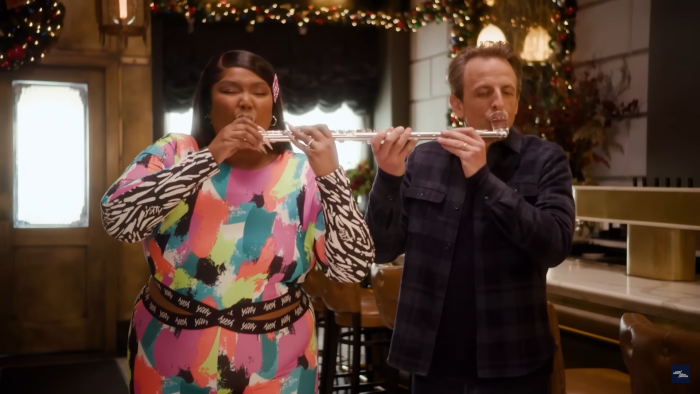 I had appendicitis three months ago. It was the most pain I had ever experienced in my life. To help me deal with the pain, I was hooked up to some great drugs. I was also pumped full of fluids. Hydration without drinking was a truly strange feeling, but it must be the secret behind Seth Meyers’s ability to drink himself into oblivion and still do a show two days later.

On a recent episode of Late Night with Seth Meyers, Seth went day drinking with Lizzo. It was just as incredible as it sounds. Both people are funny and charming and their chemistry is off the charts. What makes that even better is that Meyers makes it clear that they just met!

Lizzo is the perfect companion for this segment. She’s having a blast. She reacts to jokes like she’s never heard jokes before, and I mean that as a huge compliment. Every joke hits her like a discovery. Generous laughers are a gift to comedy. Lizzo is a gift to the world. It all adds up.

Also, bonus points to Lizzo for the Unbreakable Kimmy Schmidt reference. Not many people sing “Pinot Noir” when it is offered to them, but they should.

Finally, I’ve often thought that Jordan Klepper subjects himself to the most punishment for his show. That said, watching Seth Meyers get this drunk hurts me. I can only imagine the kind of recovery that is required, which is why I’m certain that there’s an RN on set with fluids and maybe some great drugs. It’s the only way it makes sense.