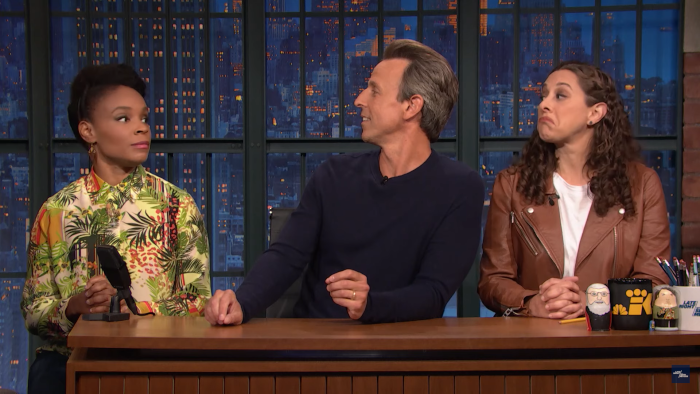 JR Ewing. Mr. Burns. Meredith Grey, I think? What do these characters have in common? They all seemingly “died.” They all went on to survive their close calls (or get appropriate contract extensions) and send the ratings for their respective shows skyrocketing upward. Now, death has come to Late Night with Seth Meyers. Or has it? The answer is no, but that won’t stop me from using it as an excuse to expose more readers to Amber Ruffin and Jenny Hagel!

Again, no one actually dies. Wait, don’t go! No one dies, sure. That doesn’t make this bit any less funny, and it is freaking hilarious. Hagel is gay, Ruffin is Black, and they’re both women! Seth tells a setup to a joke, and Amber or Jenny hit him with the punchline. The bit always scores, and this iteration is no different. Not only are the jokes hilarious, but the feeling among the three is also undeniably friendly. Three funny friends, telling jokes together. Until someone dies!

Sorry, I had to. Just like you have to watch this video. Those are the rules!