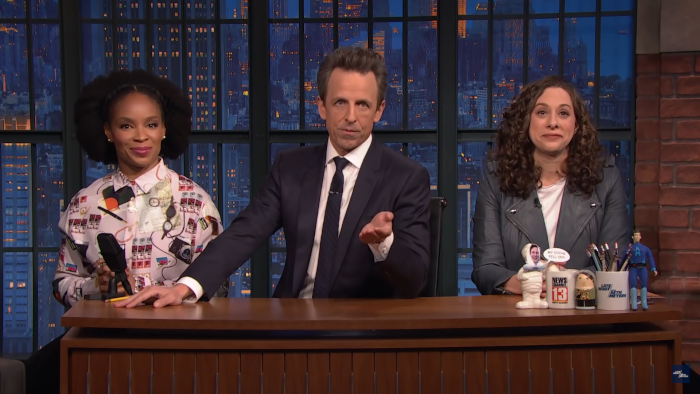 Sometimes, late-night bits can feel like throwing stuff at the wall and seeing what sticks. Even with a talented writing staff, working around the clock, you can still run into some duds. But they have to keep trying. They have to produce new ideas, hoping to land something that can become a recurring bit. Now and then, gold is found. A perfect example of that is the Amber Ruffin and Jenny Hagel segment Jokes Seth Can’t Tell.

The setup is simple enough: Amber is Black. Jenny is gay. They’re both women. Seth sets up a joke, and they jump in for the punchline. Boom! Comedy gold. Not only does it play on the discomfort of their supportive host but it also highlights the lack of diversity in the late-night landscape. We’re lucky enough to live in a world where Amber and Jenny are also hard at work on The Amber Ruffin Show, but that’s a step in the right direction, not a fix-all.

A real highlight of this iteration of the bit is the audience reaction. The jokes are, purposely, “taboo.” But they’re taboo by late-night standards. Amber and Jenny don’t say anything edgy or wild, they’re just making jokes that usually don’t get told. The audience is not prepared. They’re still supportive, there’s just an air of, “are we supposed to laugh at this?” It made an already enjoyable bit even better, especially with the way Amber reacts to the crowd.

It’s easy to throw around the phrase “this is the future of late-night,” but dammit, these two are. You can just feel it. Even David Letterman pointed out the excellence of the sketch when he appeared as a guest later on. Amber Ruffin and Jenny Hagel know what the hell they’re doing and it’s only a matter of time before NBC realizes that one night a week for people this funny is just not enough.


← 'Abbott Elementary', 'All Of Us Are Dead', 'The Afterparty', And More On Podjiba! | Trailer for Unabomber's Movie 'Ted K' Reminds Us of Sharlto Copley's Talent →