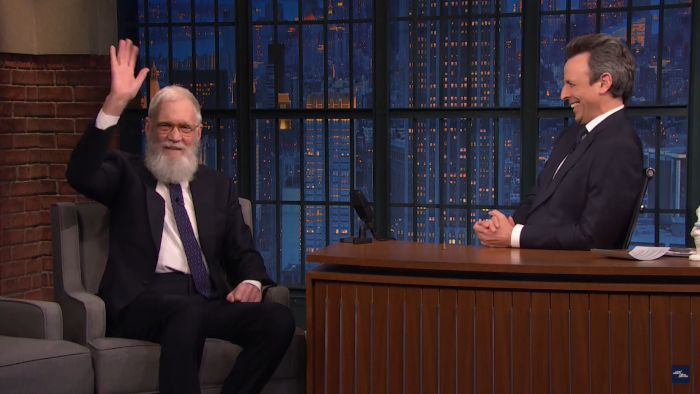 Seth Meyers Puts On A Suit To Celebrate David Letterman

I was a high school theater kid. Now and then, former students would return, and people would lose their minds. Suddenly, every kid from the techies to the leads turned into blubbering ass kissers. Sycophantic behavior was the norm as students tripped over themselves to impress people who… graduated, and those graduates would revel in it. I am thrilled to say that David Letterman appearing as a guest on his old show, now hosted by Seth Meyers, was nothing like that.

Don’t get me wrong, Seth was excited. It’s David Letterman! The man left an indelible mark on late-night. Meyers is now, technically, continuing that legacy. Meyers has been back in front of live audiences for months, and this is the first time he put on a suit. Every time he smiles you can see a wave of admiration emanating from his entire being. It’s not merely that he’s celebrating someone who used to do what he does; he’s celebrating someone he respects.

The best part is that Letterman has the same respect for Meyers. He could easily lord himself over the host if he wanted to. instead, we see a softer, kinder David Letterman. He’s full of compliments, not just for Seth but for the band and the writers (Amber Ruffin and Jenny Hagel). Letterman spends almost the whole time dishing out compliments. He’s not concerned with his legacy, he just wants Meyers to know he’s doing a great job.

There’s also a sense of nostalgia in Letterman that I was not expecting. He loves being back out in front of an audience. He loves the band. I’m sure he wouldn’t go back to doing his show tomorrow, but you get a sense that he misses it dearly. He feels like a father, visiting a child that has grown up and is living on their own without help. He’s proud but knows he’s not needed. It’s an incredible thing to see, and Letterman does not try to hide it.

There is a world where Meyers could have bent over backward while Letterman openly critiques his every move. Letterman could have sat behind his old desk and pretty much ran the show. Instead, we got two people who admire each other deeply, doing what they do best; making people laugh.


← Jeff Zucker Abruptly Resigns from CNN Amid an Affair with Messy Implications | 'Abbott Elementary', 'All Of Us Are Dead', 'The Afterparty', And More On Podjiba! →