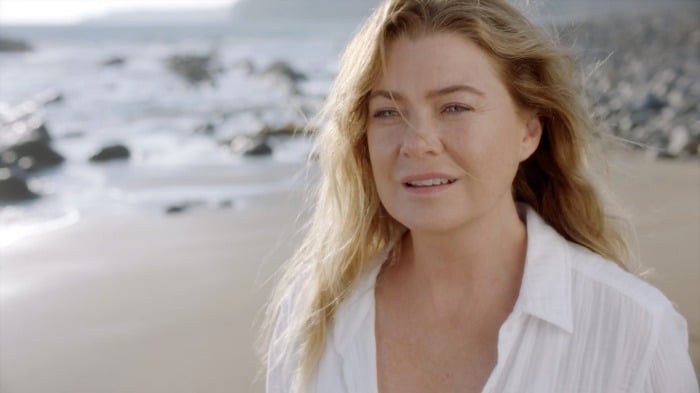 Ellen Pompeo has been the face of one of the most popular shows on television for going on sixteen years now. Since 2005 she has been front and center of Grey’s Anatomy, and it was revealed last year that she is being compensated to the tune of $20 million a season for her continued presence on the show.

And what kind of presence does she have on the show in its 17th season? Well, back in the second episode she collapsed in the parking lot due to COVID and has spent most of the season either lying in a hospital bed or walking along a beach that represents limbo with other characters who have died or are close to death. This past week’s episode was notable for seeing Meredith upright and present in a setting that was not a hospital bed or that dream beach (which looks a lot like Southern California), but that setting was in ANOTHER character’s hallucination/trauma dream. I know there are some story-telling difficulties this season given the shortened shooting schedule but man, I did not need a whole episode of Teddy Trauma. (I did, on the other hand, need those precious few minutes of Amelia pointing out that Owen Hunt has a real talent for fucking up the lives of women he claims to love, A+ there!) At this point in the shortened season, Ellen Pompeo is averaging over a million dollars an episode to either lie in bed or hang out at the beach and you know what?

I have seen every episode of Grey’s Anatomy and Ellen Pompeo has consistently put in the work to make Meredith Grey a complex and interesting character through the years. The show itself tended towards the melodramatic, but Pompeo herself always worked to make Meredith grounded and relatable even when working with questionable material. “Pick me. Choose me. Love me,” was not a strong moment, but one that probably more of us can relate to than we want to admit. Her response to stress and trauma has evolved as she’s gotten older, gotten therapy, and become a mother herself. She’s gone from being the young intern or resident who needs someone to hold their hand when they get ahead of themselves to doing the hand-holding for younger characters. While it may be easier to focus on the fireworks of individual episodes, the long arc of Meredith Grey’s adulthood is a story in and of itself, and Pompeo has spent nearly two decades telling it. Is it a million dollar per episode story? Well, the economics of network television salaries are an entirely different conversation, but I know that ABC is making far more than that off of her work.

Pompeo has hinted that she’s ready to start talking about how to end that story. I don’t see a future for Grey’s Anatomy without Meredith Grey, so that may be why ABC has started to really push the Station 19 connections. Whatever happens to Meredith, though, Ellen Pompeo earning a million dollars an episode for lying in a hospital bed or lounging on a beach? Definite career goals.

← Okay But Have You Ever Wanted to See a Young Sam Neill's Screen Test As James Bond | 'Shameless' Is Not the Show It Once Was; We're Still Going to Miss It →