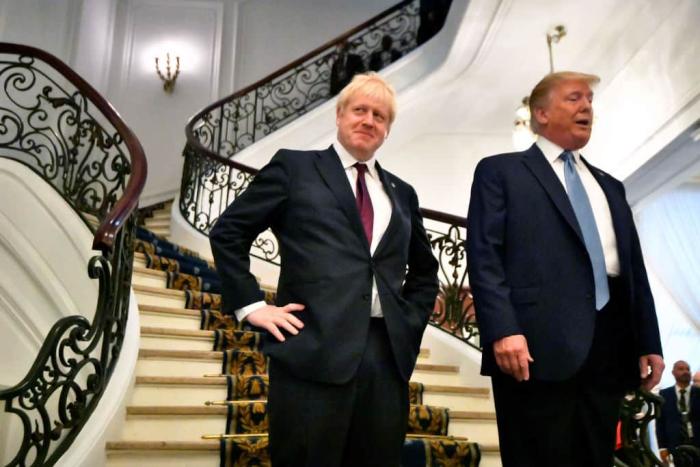 As Joe Biden readies himself for the White House and Donald Trump hides in the golf bunkers tweeting to nobody, the other world leaders have taken to social media to congratulate the winner of the 2020 Presidential election. As many people have already noted, there’s a palpable sense of relief from many nations that they won’t have to deal with the toddler fascist anymore. For Brits like me, it’s been a moment of bliss and a reminder that we too can one day be rid of our blonde proto-dictator of staggering ineptitude and his gaggle of cult-like goons.

Step forward Prime Minister Boris Johnson, the Conservative Party leader, a raging racist and misogynist with a history of homophobia to his name as well as a long and well-documented past as what we Brits call total f**kery. He’s a slimeball, a conniving creep on the level of Trump albeit with a larger vocabulary. He’s a scheming narcissist who desperately wanted power for no other reason than he felt entitled to it. He’s responsible for Britain’s staggeringly poor response to COVID and the thousands of deaths that it’s caused across the nation. So, when he took to Twitter to congratulate ‘our most important ally’, we had no time for it.

The person who got the ball rolling against Boris was actually the American Tommy Vietor, a co-host of Pod Save America and former NSC spokesperson for President Obama. His response was beautiful.

This shapeshifting creep weighs in. We will never forget your racist comments about Obama and slavish devotion to Trump but neat Instagram graphic. https://t.co/aXga8j5Jpv

‘Shapeshifting creep’ is such a simple but beautiful insult. Boris has more faces than a game of Guess Who. To say he’s two-faced would be an insult to Harvey Dent.

For those of you who have forgotten, Johnson previously accused Obama of snubbing Winston Churchill (?!) because of the ‘part-Kenyan’ President’s ‘ancestral dislike of the British Empire.’ Not so much a dog-whistle as a full-on foghorn. Johnson’s racism goes far beyond that. In a Telegraph article from 2002, he referred to African people as ‘cheering crowds of flag-waving piccaninnies’ with ‘watermelon smiles.’ That same year, he also said that the ‘problem’ with Africa is ‘not that we were once in charge, but that we are not in charge any more.’ He compared Muslim women who wear the burqa to ‘letterboxes’ and ‘bank robbers’ and said that Islamophobia ‘seems a natural reaction, and, indeed, exactly what that text [The Koran] is intended to provoke.’

So yeah, he’s a f**king racist as well as a slimeball toady. Bless Vietor for getting #shapeshiftingcreep trending.

America! Alexander de Pfeffel Johnson (AKA Boris) Born in Upper East Side New York 1964, only renounced his American Citizenship in 2016 to become British Citizen but by now you will know him better as #shapeshiftingcreep pic.twitter.com/xhOSgAQIIZ

Boris Johnson here, talking about protecting the ‘rules-based international order’ weeks after introducing domestic legislation to break an international treaty with the EU, and by extension, to shit all over the Good Friday Agreement.#shapeshiftingcreep pic.twitter.com/PhjQbsvJMG

If Johnson thinks he’ll be able to step up as Biden’s British BFF then he’ll quickly be knocked back down to Earth. Biden has spoken out against the problems of the Tories’ Brexit plan and the havoc it would cause for the Irish borders and the Good Friday agreement. According to the Sunday Times, Biden’s team ‘do not think Boris Johnson is an ally’ and that there will be no ‘special relationship’ with him. They also noted, ‘If you think Joe hates him, you should hear Kamala.’

Christ, I can’t wait for us to finally fire Boris. Preferably out of a cannon.

← Maybe Trump Should Have Watched 'Wilmore' on Friday | 'The Mandalorian's Gina Carano Supports Trump, Pedro Pascal Absolutely Does Not →