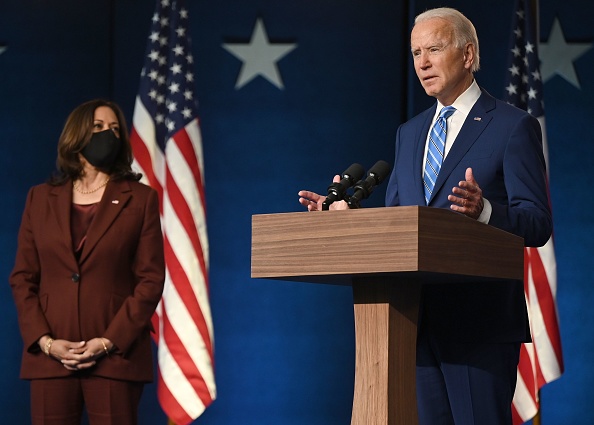 Election Updates: We Have Entered the Total Meltdown Stage of the Election

10:55 — Aaron Rodgers has 300 yards and 4TDs already tonight. Also, Donald Trump probably will not concede, even after Joe Biden declares victory (if he declares victory).

CBS News has learned that President Trump does not plan to concede even if Joe Biden declares victory in the coming days, @weijia reports https://t.co/igISEfbXCS pic.twitter.com/0KJPrdCeN6

He better start warming up that non-concession, because the deficit in PA is down to 26,000.

Current margins and trends as outstanding ballots are counted

New vote count in Pennsylvania drops Trump's lead in the state to 63,725 votes.

NBC's @SteveKornacki reports that there are roughly 250,000 ballots still to be counted in the state. @MSNBC

NEW: I’m told that President Trump can’t get his messaging straight on counting the votes because he doesn’t understand what “stop the count” means. On a call this morning, an adviser had to explain to him that if they stopped counting votes right now, he would lose the election.

All of Trumpworld is melting down.

Context: He said Trump should put Dr. Fauci’s head on a pike outside the Whitehouse as a warning to bureaucrats. #onlythebestpeople https://t.co/3MhHcfAiUF

7:33 — Jake Tapper had a nice, appropriate response to Trump’s ravings.

7:13 — I took a break for dinner, so I missed Trump’s speech. I understand I missed very little. I’m not going to give it any attention, other than this:

Trump's lead in Georgia now under 4000 votes after Chatham absentees report.
Might still be about 20000 votes left throughout the state, based on the earlier tallies from the secretary of state. Hard to think Biden wouldn't find another 3700 votes https://t.co/io5SZi0vvp

6:00 — That’s the President-elect until Inauguration Day, thank you very mu … oh, you mean Trump. Cool, cool. What could go wrong?

The president is now speaking at 6:30 pm, per updated schedule

5:25 — The Republicans are at the “we’re losing it” stage of the election.

Under 10k in Ga. https://t.co/thAdHORuav

In PA, meanwhile, the margin is 90,000 votes now, and the votes still coming in are overwhelmingly for Biden, and we’re still waiting on Philly, where there are 80-90,000 votes outstanding, almost all of which go to Biden.

There are approximately 190k ballots left to be counted in Nevada. Of this total, 90% are from Clark County. More details in the @NVSOS statement that can be found here: https://t.co/9o9zpp8okt.

Biden: "Democracy is sometimes messy. It sometimes requires a little patience as well, but that patience has been rewarded now for more than 240 years with a system of governance that has been the envy of the world. We continue to feel very good about where things stand." pic.twitter.com/gTgN1UKEel

Meanwhile, Don Jr. is wondering why the party has abandoned his father. “BACK US UP WHEN WE FILE INSANE MERITLESS LAWSUITS!”

The total lack of action from virtually all of the “2024 GOP hopefuls” is pretty amazing.

They have a perfect platform to show that they’re willing & able to fight but they will cower to the media mob instead.

Don’t worry @realDonaldTrump will fight & they can watch as usual!

Eric’s wondering, too. “Where’d everybody go?”

Where is the GOP?! Our voters will never forget…

2:51 — Is anyone getting anything done right now, or are we all just hitting refresh buttons?

1:24 — Ha! This is what I was talking about yesterday. Fox News, which is sticking by its Arizona call, may not want to be the network that calls it for Biden. But what if they were … ?

So Fox has a very tricky decision to make: Call NV and the election, based on that early AZ call, and escalate war with Trump; or wait for someone else to call based on PA and follow that. (It's all an artifact of TV's bizarrely oversized role here ofc.) https://t.co/VzNvxNtDJl

Biden must win the remaining ballots about 63% - 37% to close the gap.

Meanwhile, the count has resumed in Philly.

UPDATE from @mitchellreports - The PA Supreme Court has overruled the Commonwealth Court ruling favoring the Trump campaign on watching the mail in ballot count in Philadelphia.

The mail in counting is resuming. https://t.co/GhZPkZEKY2

11:58 — AAAaahhhhhhhhh! Voted temporarily halted in Philly so that Dems could deal with a lawsuit re: Trump observers.

11:30 — The Biden campaign is a little more confident than the rest of us, probably.

"We will win by a sizable number in Pennsylvania,” @jomalleydillon says.

She adds that Georgia is a “true toss-up” but Biden camp believes it leans toward them.

Georgia would be awesome. Pennsylvania would be better because with PA, we don’t necessarily need Nevada. With Georgia and not PA, we need Nevada. Nevada looks very good for Biden, but Occam’s razor and all.

The Biden campaign view of the key states at the moment.

NEVADA: They expect to win, with it to be called today.

PENNSYLVANIA: Expects gap to narrow. They expect by end of the day they will win.

Not everyone has called Arizona, Joe! AP, NPR, and Fox have, but the NYTimes hasn’t yet.

Also, fun new wrinkle: Senate control may come down to TWO Senate seats in Georgia. Uh, Stacey Abrams? I hate to bother you, but could you help just one more time?

Per email from county to elex board, those 35,413 include about 29,000 ballots sent to voters who first got wrong ballots (they have to be double-checked to ensure no one voted twice). Also, unscannable ballots & some missing dates or illegible signatures…2/

Not just a day off. 29k of 35k left can't be legally counted until Fri. due to court order. 29k are replacement ballots bc a contracted company delivered wrong ballots last month. Election return board HAS to legally meet tmrw before counting can resume https://t.co/1tvsWBlZiC

This is the closest real life comes to having Ron Howard narrate it pic.twitter.com/mGkuDtWB7E

Also, Georgia expects to be done with its count at noon, and Nevada will do some reporting at noon. GAH.

10:00 — I think this is good, in Georgia, where Biden needs 64 percent of the outstanding votes to pull ahead.

8:00 a.m. — Good morning. Here’s the state of the race after the ballot counting last night: Biden is leading in Nevada, and the outstanding votes are thought to favor him. We’ll know those results later today. In Arizona, Trump is closing the gap, and it’s going to be close. In Georgia, Biden is closing the gap, and it’s very close already (Biden is down by 18,000 votes now, and it should be noted that Ossof is also on the cusp of forcing a runoff in the Senate race). In Pennsylvania, Biden is down by 3 points, but there’s still a lot of outstanding votes and they are expected to favor Biden.

Biden just needs Nevada and one other state. Most folks believe he will get it. I like to think that, if there are enough votes for Trump to overcome a 3+ deficit in Arizona, there’s definitely enough votes for Biden to overcome a 3+ deficit in Pennsylvania. One of those has to break for Biden, one would think. I’d much rather be in Biden’s position than in Trump’s, but also: I’m not going to count any chickens (except the ones in my yard, to make sure they’re all there). We thought the Russia probe would be the end of Trump. We thought at one point that there was a chance he’d be successfully impeached. It doesn’t appear that Trump has a lot up his sleeve — apparently, Jared Kushner threw their legal strategy together on the fly just yesterday. When Rudy Giuliani is out making public statements on your behalf, your campaign is probably not in good shape — but you never know with these people. They play dirty. They cheat. I saw yesterday that Trump told his people to go down fighting. He will throw his own children under a literal bus to save his own ass.

Trump also has a lot of passionate (potentially violent) supporters. Trump has also appointed a lot of judges. Someone said yesterday that they’re not too worried about that, because those judges may have been appointed by Trump, but they were all selected by Mitch McConnell and the Heritage Foundation, and there is a difference between incredibly conservative judges and completely off the rails. This right here, after all, is insane, because the only way Trump can win is if those votes are counted. He’s currently losing in Arizona!

Trump supporters are literally outside a government building in Arizona protesting the fact that votes are being counted. pic.twitter.com/hxi6VU9ZTS

I’ll believe it when I see it. A lot of norms have fallen over the last four years. I won’t trust anything until every network calls it for Biden. Even then, I won’t trust anything completely until Biden is sworn in. When I woke up this morning and opened up my laptop, it was still on MSNBC from the night before, and on Morning Joe they were talking about what Trump would do after he left office. STOP THAT RIGHT NOW. We’re not there. yet. Maybe later this morning. Maybe this afternoon. Maybe tomorrow. Maybe never.

Count every vote. Remain cautiously optimistic. The Trump Administration has been like a terrible horror movie, and we don’t know yet if it’s the kind where we get away in the end, or if he lumbers back to life and chases us over a cliff.