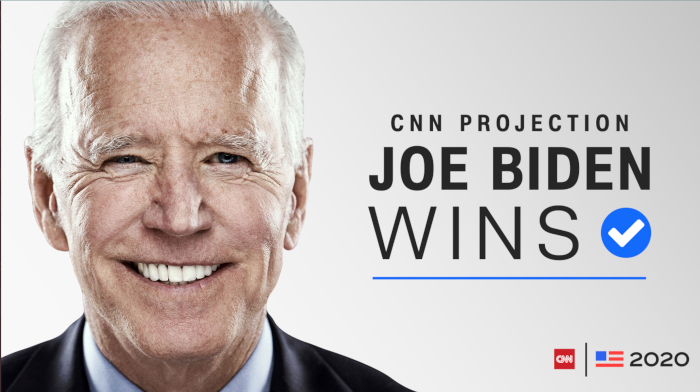 It’s over. CNN has called it. NBC has called it. MSNBC has called it. The NYTimes has called it. It’s over. We’ll probably never get a concession speech from Donald Trump, but an end to the four-year nightmare that he has inflicted on America is now in sight. That sense of dread that has been clinging to you since 2016 — and has gotten considerably heavier since March — will finally begin to lift, albeit slowly. None of the problems of America will disappear anytime soon, and we will be cleaning up the mess left behind by the Trump Administration for years, if not an entire generation, but the existential threat will lift, although it may take years for the Trump PTSD to fade.

There will be no more Stephen Miller in the White House. No more Bill Barr or Steve Mnuchin or Jeffrey Navarro and Kayleigh McEnany or Kellyanne Conway. Ultimately, we don’t know who the cabinet will be — and that may depend in part on those two Georgia Senate races in January — but we can safely bet that there will be people of color and women on that cabinet. The Vice President will be Kamala Harris instead of Mike Pence. That is huge.

The news cycle will no longer revolve around one man’s Twitter account. Joe Biden is on Twitter. His account is boring. I love it. We won’t wake up thinking, “What fresh hell awaits us?” anymore. Psychologically, this is going to be transformative, and it will give us more energy and enthusiasm to fix and enjoy other parts of our lives, and tackle societal problems that were more difficult to get to because the bad man wouldn’t stop screaming at us.

Selfishly — and on a purely personal level — one of the other things about Biden winning that I appreciate is that, when this goddamn pandemic ends, people will start paying more attention to TV and movies again. And maybe even books! Hours a day that we wasted bitching and moaning about Trump can be refocused on the things we love, like thirst posts and Love, Actually think pieces. We can fight these political wars again through the movies and television shows, the stories and characters that we consume, and we can do it without being distracted by one man’s Twitter feed.

Congratulations to all of you. Every fucking one of you deserves it. For every Democrat who knocked on a door, worked a text bank, or just convinced a friend; for every progressive who swallowed your pride a little and voted in the interests of everyone else; and even those two guys who read the site who are slightly right of center but voted for Biden anyway, because you put humanity over party. Congratulations, and thank you to all of you.

And make no mistake: This is a huge deal. Joe Biden overcame massive voter suppression; a President exploiting the entire governmental apparatus; and a torrent of misinformation from the President, his supporters, and foreign entities. The deck could not have been stacked more against Joe Biden, and he not only pulled it out, as is becoming increasingly clear, he defeated Donald Trump handily. Joe Biden did it cleanly. With honesty and integrity. He may not be everyone’s favorite candidate, but he fought a race with which we could all be proud. He never spoke an ill word about Trump’s family. He never talked about locking anyone up. He never went full Lincoln Project.

Congratulations to America, and congratulations to Joe and Kamala, who have a tremendous amount of unf**king to do in front of them. Let us all hope for four years of tedious competence that we can safely ignore for HOURS at a time!