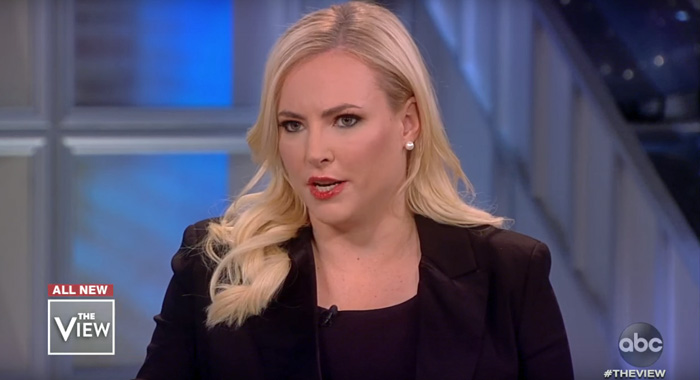 Meghan McCain Tried to 'Both Sides' the Coronavirus

So right off the bat, the most pressing question on everyone’s mind is, Mike, why am I reading about yesterday’s episode of The View today? And that’s a very good question that’s undoubtedly challenging our foremost thought leaders, so I’ll quickly break it down for you: My kids are home for at least the next two weeks and they’re already climbing the walls, so it’s a goddamn miracle these pieces are in English, you motherless turkeys.

On that note, when it comes to calling out Donald Trump’s dangerous and shit-awful response to the coronavirus, Meghan McCain has been eerily… great? That can’t be the right word, and my apologies if that sentence caused your phone to burst into flames. (Send the bill to Dustin.) But somewhat seriously, Meghan has been uncharacteristically ruthless when it comes to calling out the administration’s uncanny ability to drop the ball in every way possible, including ones that nobody saw coming like Trump possibly being a goddamn Patient Zero. Hell, even this piece right now is going to include some admittedly accurate criticisms from someone who has, so far, only shown a knack for screaming her father’s name until Joy Behar bleeds from the eyes.

Take a look at this bomb she dropped on Devin Nunes. There are crick beds that haven’t been shot up this much by Meghan.

“I think this has been a total referendum on our trust of our institutions in this country,” McCain said. “There’s clearly a sheer distrust of the government at a level I don’t think even I realized and I’m a conservative and I have a fear of big government as it is. The mixed messaging coming out of the White House now is not only irresponsible but it’s downright dangerous. We have Rep. Devin Nunes (R-CA) going on television saying, ‘Oh, it’s OK. Go socialize. It’s OK. Hug people. It’s fine.’ When you have the president of the United States that can’t even handle not shaking hands during a press conference — lead by example! I’m not seeing a lot of profiles in courage in the White House right now and I think that’s what’s stoking anxiety.”

After ABC News Chief Medical Correspondent Dr. Jennifer Ashton warned against “pointing the finger” at those who are trying to manage the fallout, McCain said, “I don’t like the idea of politicizing it in the sense that it’s all Republicans’ fault or all Democrats’ fault. But it’s our job as citizens to call out B.S. when you see it.”

“And when you have people from the administration saying, we don’t know if we have enough ventilators, we don’t know if our hospitals can handle it,” she continued, “it is more than fair to have righteous indignation as American citizens that I don’t believe they are handling it as well as they should be.”

I don’t like the idea of politicizing it in the sense that it’s all Republicans’ fault or all Democrats’ fault.

Hahaha, no, sorry. Nope. We are over 75% of the way through Trump’s first term, which included him disbanding the National Security Council’s pandemic unit because it was created by Obama. And Trump did it all to the cheers of Republicans who voted him into office, and Republicans who flat out admitted that he committed abuse of power, but what are ya gonna do? When the final body count for the coronavirus is calculated, it will absolutely land at the GOP’s feet thanks to them gambling with our health by putting a reckless rape-monger in the Oval Office because it was funny when he called Rosie O’Donnell “fat” on Twitter. Every single MAGA hat is dripping red with blood, and I don’t give a shit if it makes Meghan McCain sad, we will never let MY FATHER’s party off of the hook for the days ahead.