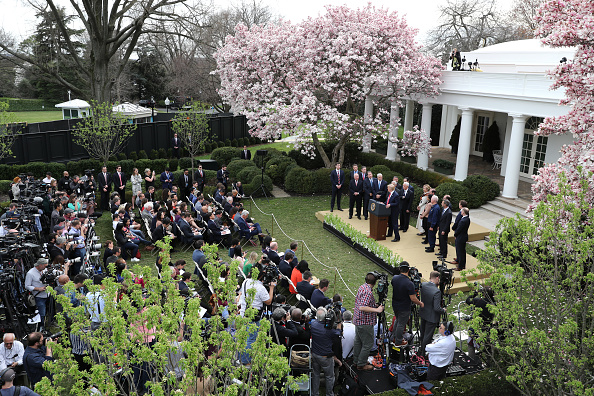 Today, during a press conference timed to goose the markets before the weekend’s closing bell (it worked!), Donald Trump took the podium in the Rose Garden, declared a national emergency, and commenced to shake hands with some of the nation’s richest CEOs, only days after interacting with at least two people who have tested positive for the Coronavirus.

The entire press conference now appears to be an attempt to pump up stocks of big american companies right before the close. Astonishing. https://t.co/BPNQ1DviVK

The press conference was less about solving our public health crisis as it was about trying to boost the markets. One hundred million people could die, but Trump will declare victory if he can keep the Dow above 25,000. The national emergency designation will allow Trump to release $40 billion in aid to help with the Coronavirus. He also said he would suspend interest payments on federal student loans (why not just suspend the … whole payment?) and Trump promised that testing will (finally) ramp up with the help of … Target and Walmart.

Trump has placed the national emergency response in the hands of big business— Google, Walgreens, WalMart, Roche, Target. CEOs at his presser are vowing to keep stores open so Americans can shop.

And then he tried to downplay the threat again:

Trump says it "could get worse." He then says, though, "Some of the doctors say it will wash through…flow through."

He also slimed a PBS reporter, Yamiche Alcindor, after she asked a good question (and he appeared to try and throw Fauci under the bus, too):

Q: What responsibility do you take for cutting the global pandemic when you took office?

TRUMP: "I just think it's a nasty question…When you say me, I didn't do it….I don't know anything about it."

Near the end of the press conference, he added this, when asked about the testing failures:

Question: Do you take any responsibility for the lag in testing?

Trump: No I don’t take responsibility at all pic.twitter.com/YgTRBAx1ZU

Whatever else you want to say, that will likely be the takeaway from the press conference and Trump’s presidency.

Man, I wonder what the takeaway quote from this press conference will be? pic.twitter.com/5I8K5LU21n

Well, unless he infects the nation’s top CEOs with Coronavirus, in which case that will be the takeaway from his Presidency, although he will not take responsibility for that, either (Trump eventually conceded that he might get tested).

This is why it’s so important for reporters to follow up after one is cut off. On third try, and from third reporter, Trump relents and says* he’ll get tested for the virus.


← What Have 'The Kids In The Hall' Been Up To? | 'On My Block' Season 3 Review: The Netflix Series is Firing on All Cylinders →