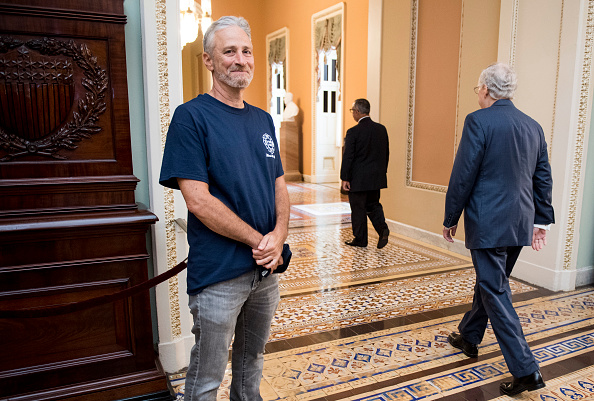 Jon Stewart Joins Twitter to Get In on the GameStop Discourse

I have mentioned before that I briefly worked for a Boston attorney on a case he himself had been working on for years, in which he claimed that his client had been framed by the FBI for a hit taken out by one of Whitey Bulger’s guys. I thought the attorney for whom I was working was an absolute crackpot, although I was later proven woefully wrong. His client was awarded $102 million in 2007 for his wrongful imprisonment. He had been framed by the FBI for a murder perpetrated by an FBI informant inside the Boston mafia.

That same attorney also had me researching how to sue Wall Street to stop the practice of short selling, which he thought was unconstitutional. I don’t know how he surmised that it was “unconstitutional,” but again, I thought he was a crackpot, and so that is how I approached the assignment.

In the intervening years, however, I have also concluded that while short selling is not unconstitutional, it really is sh*tty. You are basically placing a bet and therefore rooting for a company to fail, and by virtue of placing that bet, you are hastening the company’s failure.

That, ultimately, is why all these people on Reddit initially revolted over the GameStop situation. They had a semi-ironic attachment to the video-game seller and they didn’t like the idea of rich assholes running the stock of an already faltering company into the ground, and so they all collectively agreed to f**k over the rich hedge fund guys and make some money along the way. Good for them!

In fact, yesterday, the Robinhood app, which allows retail investors to make trades for free, and which has driven a lot of the activity on the stock of GameStop, Bed Bath & Beyond, and AMC theaters, halted trading on those three stocks for retail investors. I think a small part of it might have been to prevent the retail investors from losing their shirts, but a bigger part was the fact that the Robinhood app itself had to borrow millions of dollars to cover the trades. Oh, and also, Citadel Capital, which bailed out hedge fund Melvin Capital, owns a stake in Robinhood, so there’s that, too!

Nevertheless, when Robinhood put the kibosh on trading in GameStop shares, the stock dropped nearly 50 percent. However, after Robinhood lifted its restrictions in the face of a shitton of backlash, the stock for GameStop shot back up again today. It was up 70 percent in early trading, on top of its 1,800% increase over the last three weeks.

One person who was part of the backlash was one Mr. Jon Stewart, former host of The Daily Show, who joined Twitter basically to shit on Robinhood.

This is bullshit. The Redditors aren't cheating, they're joining a party Wall Street insiders have been enjoying for years. Don't shut them down…maybe sue them for copyright infringement instead!!
We've learned nothing from 2008.
Love
StewBeef

I remain of two minds on this. As a journalist type, I don’t really like the idea that a bunch of people on Reddit can basically manipulate “the truth” in the respect that GameStop, the company, is not actually 1,800 percent better off than it was three weeks ago. To Stewart’s point, it’s exactly this sort of market manipulation — pretending that something worthless has worth, specifically in the housing market — that drove the 2008 stock market crash, which did have real repercussions on the economy.

On the other hand, I don’t really care that much about the fate of big hedge fund managers losing millions of dollars, or even a bunch of retail investors from Reddit losing their savings over a troll-job that ultimately illustrates a very valid point about how divorced the stock market is from reality. It’s all very much a stupid game. It’s just all very unfortunate when that game is going well for the wealthy people, those of us who have nothing to do with the stock market see very little benefit, but when the game is going poorly, we are the ones who always seem to pay the price.

In any respect, Stewart is absolutely right to note that these Redditors aren’t doing anything that Wall Street insiders haven’t been doing for goddamn decades, and in doing so, they also illustrate what a charade Wall Street really is. The whole goddamn stock market is built on a bed of lies.