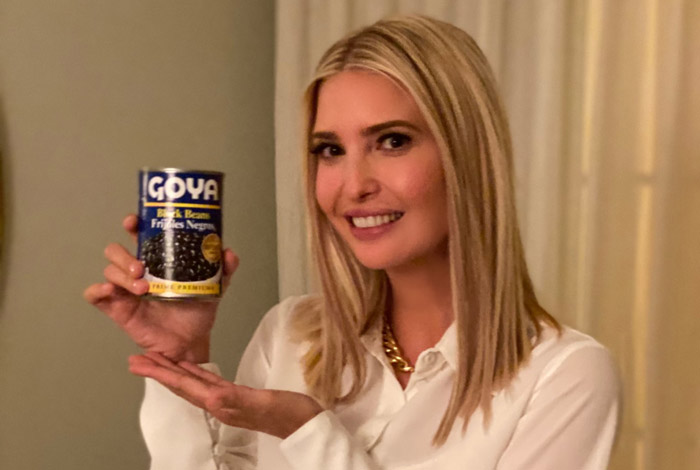 Yesterday, Ivanka Trump trolled liberals with a promotion of Goya black beans. With everything going on, you might have missed why posing with Goya products is a troll. Well, last Thursday, Goya CEO Robert Unanue praised President Donald Trump during a press conference in the White House Rose Garden, saying, “We are all truly blessed … to have a leader like President Trump who is a builder.”

Unanue’s support of the blatantly racist president, who began his campaign with racist comments against Mexicans, championed building a wall at the U.S.’s southern border, and has caged refugees and their children, led to a call from liberals and many in the Latino community to boycott the Goya brand. Of course, this meant conservatives online went giddy over bragging about buying Goya products.

That brings us to Ivanka, who has never taken a photo that doesn’t feel like cover art for some dystopian novel about the wealthy harvesting the organs of the poor to make luxury skin creams.

If it’s Goya, it has to be good.
Si es Goya, tiene que ser bueno. pic.twitter.com/9tjVrfmo9z

As you might imagine, Trump fans cheered her post for how she was owning the libs. Meanwhile, Trump haters mocked Ivanka with a slew of memes. All this got “Ivanka” trending on Twitter.

When it's literally your first time holding an object: pic.twitter.com/28XUhfsGvG

If you think #Ivanka didn’t choose a can of “black beans” to troll people, then you haven’t been paying attention. #GOYABOYCOTT #MorningJoe pic.twitter.com/md8KNVYDtJ

This woman has never eaten a Goya product in her life. https://t.co/b7SpiScIPb

With Covid killing record numbers of Americans, Ivanka is promoting a can of fucking beans.
What a damn embarrassment.

She soon became a meme.

Ivanka’s “What a Doll” trademarked toy (Made in China) pic.twitter.com/w6YnmBr1pj

had it with anyone who EVER defends this woman or puts her as the "sane" one in this family. what a repulsive trolling of the people. also (in the SEA of illegal shit this family does) is this even ethically ok or legal?? https://t.co/M8GJajHlGS

To Chrissy Teigen’s point: Yes. As an official “advisor to the president,” Ivanka Trump does appear to be breaking Federal ethics laws by publicly promoting a product in her tweets.

Federal ethics law: "An employee shall not use or permit the use of his Government position or title or any authority associated with his public office to endorse any product, service or enterprise … " Plus, the plug was ridiculed. https://t.co/c0Bmbmo80q

She is on a tear…. pic.twitter.com/gdPrtIlT2A

Ummm, Ivanka, breaking the law on camera on Twitter is no bueno. #TrumpCrimeFamily pic.twitter.com/LmyPglN8d8

The worst part of Ivanka’s godawful Goya tweet is that it violates the law and all we can do is make fun of her for it.

Will it matter that Ivanka’s flouting the law? We turn to Congresswoman Alexandria Ocasio-Cortez.

Translation: If it’s Trump, it has to be corrupt.

This isn’t the first time the Trump klan has broken this rule. Kellyanne Conway has flat out told Fox News audiences to “go buy Ivanka’s stuff,” meaning her now-defunct clothing brand. The president promoted his Scottish golf course on Twitter and advertised his Dorsal resort by recommending it as the setting of the G-7 summit. Plus, it’s been suggested the president’s earnest promotion of Hydroxychloroquine as a treatment for COVID-19 was tied to financial gain, as the pharmaceutical companies that’d profit from increased demand of the drug have shareholders and execs that include Trump and some associates of his. And yet…