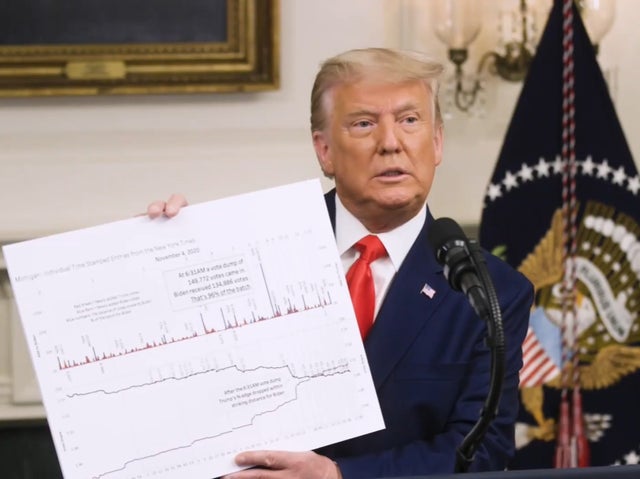 A lot of news to cover this morning, but let’s start with the big story of the last 24 hours: Yesterday, from the Diplomatic Reception Room, Donald Trump delivered what he called “the most important speech” of his presidency. It was 46 minutes of bullshit peddled by a desperate man to Facebook Live viewers. Nothing of value, or import, or of substance was said. End of story. Let’s move on, because the only reaction his speech deserves was this one, from Leslie Jones:

This is FUCKING EMBARRASSING!! pic.twitter.com/8fszMT8pbm

— It used to be that, when Donald Trump threatened to fire someone, we’d think, “Oh that’s just all talk. He’ll never actually do it. Folks: I don’t think there’s a soul that he has threatened to fire who has survived their job. He’s now threatening to fire Attorney General Bill Barr because Bill Barr released a statement showing that “no widespread voter fraud has been found.” I honestly hope Barr is fired because he will become the 1,472nd example that no matter how much loyalty you show the man, he will never return it. Ultimately, I hope that makes it at least a little more difficult to mount a 2024 run. But then again, he’s still got Rudy, because Rudy has never wavered in his ability to peddle wild, conspiracy-laden bullsh*t. He tells Trump what he wants to hear, no matter what, which is exactly why Trump lives in a different reality right now.

— Speaking of loyal Trumpers, Joseph diGenova, a Trump campaign lawyer, resigned yesterday from the elite Gridiron Club after coming under fire for, uh, suggesting that Christopher Krebs — the federal cybersecurity official who was fired by President Trump after asserting the election was free of widespread voter fraud — should “be drawn and quartered. Taken out at dawn and shot.” You know, if he’d said that on Parler, and there weren’t Section 230 protections available, Parler could be sued for it.

— Meanwhile, Sidney Powell and Lin Wood — two other lawyers associated with the Trump campaign’s election lawsuits — continue to go out in Georgia and urge Republicans not to vote for Kelly Loeffler and David Perdue because the election in Georgia has been rigged by Chinese communists. I saw Lin Wood speak to, I think, a fairly large audience in Georgia yesterday, saying that Loeffler and Perdue didn’t deserve their vote, because they weren’t standing with Powell and Lin Wood in their efforts to fight for Trump. Perdue and Loeffler are obscenely wealthy, terrible human beings being put in an awkward untenable political situation. I love it!

— Elsewhere, if you want to talk about actual voter fraud, here’s a Republican advising other Republicans to change their address and “move to Georgia” in order to vote in the runoff. This is exactly the kind of stuff that Trump is accusing Democrats of, without evidence.

“If that means changing your address for the next two months,so be it.I’m doing that. I’m moving to Georgia.”Our 6 investigation reveals deleted video-a FL attorney telling GOP members how to move to GA,vote in runoffs. It’s illegal.There’s more,& an investigation @wsbtv #gapol pic.twitter.com/or2PgWQrT1

— The virus, as you all know, is completely out of hand now. Cases are surging on top of the surge. Yesterday, we saw a record number of deaths, and there is concern that we could see another 200,000 deaths by February. A stimulus bill is necessary to get us through to a vaccine, and a bipartisan group of folks — Collins, Manchin, Toomey, King, etc. — came up with a plan of nearly $1 trillion, which gives some aid to schools, keeps unemployment insurance going for three more months, and extends the PPP program. It’s not a great plan, but it’s better than nothing, although half as good as what the Republicans put on the table before the election, which was two-thirds of what Pelosi wanted at the time. I think that means that — politically speaking — everyone kind of played this poorly, and maybe Pelosi should have taken better advantage of the fact that Trump was willing to spend as much money as Democrats wanted before the election.

In any respect, Biden is backing the bill, along with Schumer and Pelosi, with Biden saying it “wouldn’t be the answer, but it would be the immediate help for a lot of things.” Honestly: It’s not the bill I’d want, either, but if we don’t get some relief by the first of the year for all those people who are going to lose their unemployment insurance, we’re gonna fall off a damn cliff. We gotta be a little pragmatic.

Unfortunately, McConnell’s plan is still half of that, and it contains “no funding for state and local aid, no money for rental assistance, and provides just a one-month extension of unemployment benefits rather than the bipartisan proposal’s three-month extension.” It also provides no eviction moratoriums or food or nutrition assistance. It does, however, include the “three-martini lunch” deduction, which allows diners to claim a tax deduction on their meal expenditures. Wow.

Democrats need to be better at this (or win those two Senate seats in Georgia so we don’t have to worry about it). In any respect, stay safe out there, y’all. This virus is throwing a three-keg rager right now, so it’s a good time to do what we do best: Drink in our homes, alone. All we have to do to help this country out right now is to be ourselves, people! You can do it!