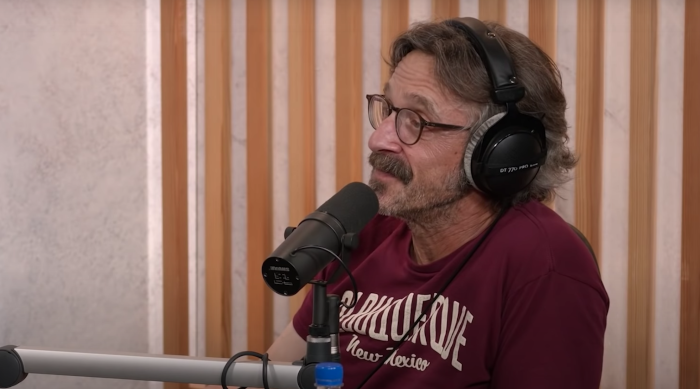 Joe Rogan and Marc Maron have not always had the most cordial relationship. I mean, there’s no real beef, but if you’re in comedy and Maron hasn’t crapped on you at some point, you probably haven’t made it yet. He’s a cranky old coot (although less so lately), and that is part of his appeal.

To that end, he was on comedian Tom Segura’s podcast this week, and look: When Marc Maron starts a sentence with, “I don’t have anything against that guy,” it usually means he has something against that guy (he craps on a radio guy named Alex Bennett herein after saying exactly that). He also gets into sh*tting on Austin here, too, calling it the “Hipster Alamo,” which is … fair (although, besides the city in which I currently live, Austin is my favorite city in America). Maron seems further annoyed that everyone in comedy seems to be moving to Austin. “I’m not going to accept Austin as the next Shangri-La,” he says, before reiterating that as great as the city might be, it’s still in … Texas where, reminder, Greg Abbot is the governor and Ted Cruz is a Senator.

As is his wont, Maron also gets amusingly passive-aggressive about Joe Rogan, who signed a $100 million contract with Spotify last year and moved his entire operation to Austin. Maron does not, however, lump Segura — who also recently moved to Austin — into the same camp. “You’re different. You’re your own guy, you’re your own life. You weren’t one of the guys who rented out space in Joe’s ass,” Maron said.

How nice of him. “There’s like a human centipede in Austin,” Maron continued. “It’s Elon Musk, Joe Rogan, and three middle acts.”

He’s not wrong. Although, when he’s not saying, “I don’t know, man,” Rogan is also sh*t-talking the Covid-19 vaccine, putting trans lives in danger, hosting Alex Jones on his podcast, and being a pain in the ass to Spotify. One thing that Joe Rogan is 100 percent right about, however, is the fact that he’s a moron.

You can watch the whole podcast right here.