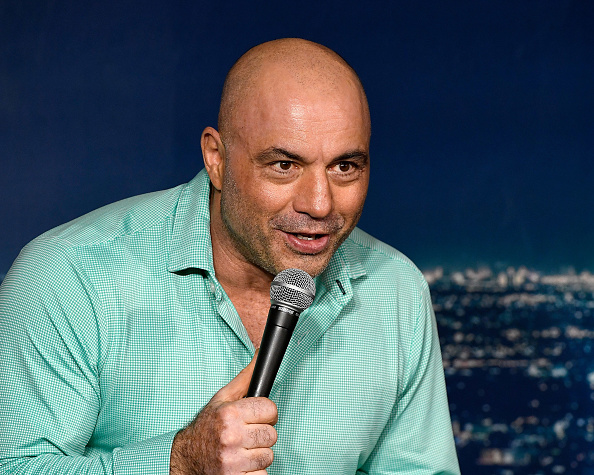 Confession: I do not know that much about Joe Rogan. I know that he was good on Newsradio, and yet despite the fact that he hosts the most popular podcast in America, I still mostly associate him with Fear Factor because I just don’t listen to his podcast. It’s three hours long. Every day. That’s way too much time to spend with anyone. I do know, however, that speaking critically of Joe Rogan often invites a lot of his cult-ish fans, who get very yell-y.

Nevertheless, I’m going to speak critically of Joe Rogan now, but before I do, I’m going to say this: I know all about the history of The Comedy Store back in the 1970s and ’80s, when it was Letterman and Leno and Kaufman, etc., but I don’t know as much about the recent history of it. This week’s episode of The Comedy Store over on Showtime took up the Joe Rogan/Carlos Mencia incident, which was pretty fascinating. Basically, Rogan called Mencia out for stealing jokes while on stage with Mencia, and the end result was … Rogan losing his agent (who also represented Mencia) and being banned from The Comedy Store. Rogan was right to call out Mencia, and that was pretty badass of him.

Meanwhile, from my limited knowledge of Rogan, he doesn’t seem like a crazy person, and I wouldn’t think that Spotify would give a crazy person $100 million (or more) to host his podcast (despite putting trans lives in danger). And yet, he had Alex Jones — who was de-platformed by Spotify (and YouTube, and Facebook, and nearly every other social media platform) — on his podcast. For f—k’s sake, why?

And so, I listened to my first Joe Rogan podcast this morning. In its entirety. It was a lot. However, here’s what I’ll say about Rogan, based on this episode: He’s definitely one of those “let’s hear them out” people, who will at least entertain anyone’s beliefs, whether or not he ultimately agrees. When it comes to Big Tech, and the First Amendment, he also thinks he’s libertarian because he believes that social media companies should be operated like utilities (not libertarian!), and that the First Amendment should apply to social media companies (which also doesn’t sound that libertarian to me), which is to say: He believes they should not be censored, and that de-platforming Alex Jones and/or removing sites that promote QAnon conspiracy theories is bad.

I don’t necessarily disagree with the idea of social media networks being operated like utilities, and I wouldn’t even object to applying First Amendment protections to social media, but I know something that Joe Rogan apparently does not, which is that false statements of fact are an exception to free speech protections. You are not allowed to make up sh*t about people. This is why there are libel laws, which themselves are exceptions to free speech, and although there is a much higher burden when it comes to libel laws and public figures, the First Amendment does not protect one’s ability to say that a public figure kidnaps and eats babies, or that Sandy Hook survivors (who are not public figures) are crisis actors. The First Amendment does not protect the ability to make up shit in order to cause harm.

Now, as for the three-hour interview? Let’s start by revealing that Alex Jones is drunk for most of this podcast. He drinks at least half a bottle of whiskey, if not more, and Rogan gives him sh*t about his alcohol consumption, his apparent past addiction to Adderall, and the fact that he looks like sh*t for a 46-year-old. Rogan tries to convince him to put down the Internet for a few months, get sober, and do some push-ups.

But beyond that, here were a few theories that Alex Jones and Joe Rogan discussed: The mRNA COVID-19 vaccine in Phase III trials makes 100 percent of people sick and hospitalizes 20 percent of those injected with it. Coal is 100 percent clean because all it releases is water and carbon dioxide, which does warm the Earth, but that’s good because it will stave off the next Ice Age. Also, that climate scientists are in league with the globalists, and they are all fighting to centralize the planet and control everyone.

— Hurricanes are weaker now than ever before, and also that frogs are gay.

— Jeffrey Epstein worked for the “dirty side” of the CIA, MI6, and Mossad.

— Democrats are using COVID to intentionally crash the economy and “maintain” power (what power, Alex? WHAT POWER?)

— Bill Gates wants to spray some sort of chemical to block rays from the sun.

There was other stuff, of course, but I think I hit all the major theories here, all of which were discussed seriously on the most popular podcast in the country and hosted by one of the most powerful new media companies, Spotify.

Now, to be fair to Joe Rogan, he did do some fact-checking along the way, and I swear to you, I don’t think that Joe Rogan could confirm a single theory that Alex Jones pushed, except as to the existence of Bohemian Grove (but not any of the crazy sh*t Jones alleges goes on there).

I’m a person who believes you should never give someone like Alex Jones a platform. Joe Rogan (like Mark Zuckerberg, mostly) believes that everyone should have a platform to say whatever the hell they feel like and that the truth will somehow come out in the wash. It sounds like Rogan’s libertarian view on this is that Alex Jones can say what he wants to say and that it is our job to believe Alex Jones or not.

But here’s what Rogan does: He spends three hours listening to an increasingly drunken Alex Jones rave, respects his theories enough to at least fact-check them, and then tells Jones that he can’t find any legitimate evidence to back up his theories.

The particularly dangerous part, however, comes in the end, when Rogan — who is being chummy with Jones, as he is for the entirety of the podcast — says to Jones, “I love you, man. Most of what you say is accurate, and it’s not bullshit,” which is the exact opposite of what Rogan spent three hours illustrating.

“You’re not trying to bullshit us. This is what I am always telling people about you. We are at a critical time where we shouldn’t be calling on people to de-platform” because it makes those people who believe in conspiracies even more fervent in their beliefs, Rogan continues. “We all know that you f**ked some things up, like Sandy Hook, but you’ve gotten some things right, which is why we want to talk to you and why it’s dangerous to censor you.”

To the Rogan fans that invariably crash this post: Tell me where I’m wrong. Tell me where Alex Jones said something that Rogan did not discredit?

And — among all the other issues — that’s the problem with inviting Alex Jones onto your show. Joe Rogan listened to him drunkenly spout bullshit for three goddamn hours, and then he says, “I love you, man. Sure you were wrong to say that the grieving parents of children murdered in a mass school shooting were ‘actors,’ but one time in 2012, you said something that proved to be sort of maybe correct, so we should definitely treat you and your beliefs about how coal mining is going to save us from the next Ice Age seriously.” Joe Rogan gave Alex Jones the biggest podcast platform on the planet to lie, and then Joe Rogan figuratively put his arm around Alex Jones and said, “We cool, bro. You’re one of the good guys, in my book!”

← Reddit Asks the Question: 'Which Fictional Character Would Definitely Be An Anti-Masker?' | Pajiba Investigates: Does Everyone In The Buffyverse Have Syphilis? →