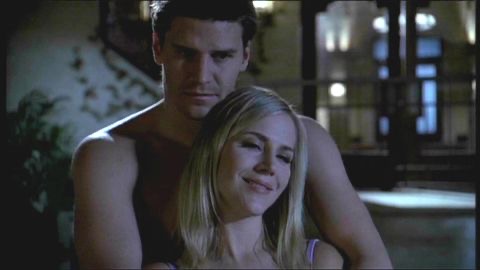 Pajiba Investigates: Does Everyone In The Buffyverse Have Syphilis?

It might seem like an odd time to bring out a yarn wall non-canonical theory about two shows that finished in the early 2000s, but as E4 has been airing both Buffy the Vampire Slayer and Angel from the beginning in the UK, and we’ve all become amateur contact tracers in our spare time, it was inevitable, really.

When you hear the words ‘Buffyverse’ and ‘syphilis’ together, your first thought might be the season 4 Thanksgiving episode ‘Pangs’, where Xander gets an unfortunate (spooky) case of the pox and it’s played for laughs. But that’s not the source of the Buffyverse STI epidemic. Xander’s case was mystical, he knew about it, and he got better. Case closed.

No, the real Patient Zero here is Darla, who, 400 years before Buffy episode 1, was dying of syphilis when she was turned by the Master. 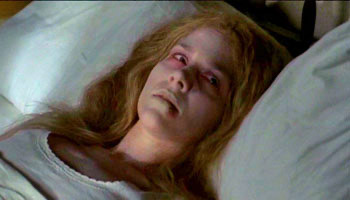 Darla wasn’t around for too long in Buffy, but at the end of Angel season 1, Darla was resurrected as human, and that pesky pox came with her. It would have killed her — again — but she was re-vamped by Drusilla. The fact that the syphilis came back with her suggests that it was dormant while she was in her vampire state; although it couldn’t kill her, she hadn’t been cured, and therefore, Vampire Darla was still hypothetically an asymptomatic carrier.

If we are on board with that logical deduction, then join me on a voyage of Sunnydale shenanigans as we see how those germs spread… In the interests of providing a cautious estimate of how many characters were affected, I will only consider characters safe from it if there is explicit reference to contraception being used.

If Vampire Darla still had it, then 150 years of having sex with Angelus means that Angel definitely had it as well. He got a soul, not antibiotics. When he slept with Buffy in season 2, he didn’t just lose his soul and break her heart, but he also gave her an unpleasant birthday present. Maybe there was a condom, I hear you say! Maybe! But if Buffy didn’t get it in season 2, she definitely got it in season 6. It’s strongly implied that Angelus raped Drusilla before turning her, and that he, Darla and Drusilla were a throuple before Spike came along, which means Spike probably had it too, and… Buffy and Spike definitely did not use any contraception the first time they hooked up.

If Spike had it, then he probably gave it to Anya in season 6 too. Anya and Xander then hooked up a couple of times in season 7. There’s no reference to contraception in any of those scenarios. Xander may have been cured of the spooky variety in season 4, but chances are he got it again for real in season 7.

If Buffy caught syphilis from Angel in season 2, then a couple of other characters may have been affected in season 4. Was there any contraception with Parker? Nothing was mentioned, so he probably started another epidemic on campus. Parker bad. Riley and Buffy did use condoms, so we can mark Riley as safe. Way to go, Riley! You weren’t so bad after all!

In season 5, Dawn was made out of Buffy, and the big hero arc relied on them sharing that Summers blood, so Dawn might have it too. Sorry, Dawn.

But by my reckoning, none of the Angel regulars escaped it. Darla would have passed it on to Connor while she was pregnant in season 3, and even though we may have tried to block the memory of Cordelia and Connor getting together in season 4, we can probably assume that there wasn’t any contraception involved because a) Cordy only did it because she thought the world was ending — it was raining fire, sexual health was probably the last thing on her mind — and b) she got pregnant. Maybe there was contraception and it failed, you cry! Sure, it would have been out of character for Cordelia, because she is one of the few characters who explicitly refers to contraception. In season 1, she got pregnant with a whole litter of demon spawn after a one night stand, but tells Angel and Wesley that she had been “really safe”. She seeks out mystical contraception before sleeping with Groo, so that she doesn’t lose her visions. Cordy is sensible, y’all. But at this point in season 4, she’s not really making the decisions; it’s Jasmine trying to engineer the circumstances for her own birth. Cordy’s under the influence of a higher power, and that higher power is not telling her to be safe. (Oh man, this whole arc was awful and I’m still mad about it.) What’s Connor’s excuse? Ugh, Connor. In his defence, he’s never had sex before and I’m guessing Holtz didn’t really provide a sex ed class in Hell Dimension Home School.

I’m defending Cordy hard, because after Jasmine was born, and mesmerised everyone, the only cure for the team was, sigh, Cordy’s blood. And so, even though it was only a teeny bit of fluid exchange, that means that Fred, Wesley, Gunn and Lorne probably got syphilis too. It helped them save the world though! It was magical syphilis!

In conclusion: Vampirism has long been seen as a metaphor for syphilis, but the Buffyverse really took that to a new place… Be a little bit wiser, baby: put it on, put it on…


← The Real Problem with Joe Rogan Hosting Alex Jones on His Podcast | With 'The Craft: Legacy' Dropped on PVOD, Blumhouse Shows How It Values Female-Made Horror →