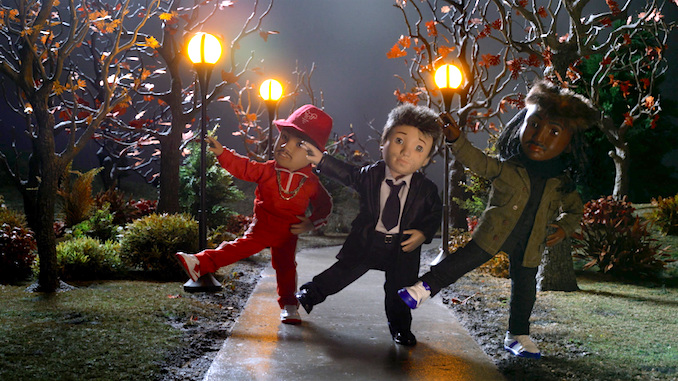 Amazon’s Patriot remains one of the best dramas of the last decade, and probably the most underappreciated. If you haven’t seen it yet, take the Lord Castleton challenge and watch the first 2 minutes and 44 seconds. If you’re not sucked in, then Patriot is not for you. I mean, it’s about an undercover CIA agent who turns his missions into folk-song lyrics to release pent-up stress. Your loss.

Patriot made me a lifelong fan of its creator, Steven Conrad, who followed up two seasons of the Amazon series with the best thing that Epix has ever produced, one glorious season of Perpetual Grace, LTD, an off-beat, off-kilter neo-noir thriller starring Jimmi Simpson, Luis Guzmán, Terry O’Quinn, Jacki Weaver, Hana Mae Lee, and Kurtwood Smith, among others. It was weird, and that is saying something considering just how weird Patriot was.

Conrad is back again, and he’s brought in many of his regulars — Jimmi Simpson, Luis Guzmán, Terry O’Quinn, Hana Mae Lee, Damon Herriman, and Kurtwood Smith — as well as some new members, including Kristen Bell, Dax Shepard, Tim Heidecker, Tom Waits, Bebe Neuwirth, Da’Vine Joy Randolph, and John C. Reilly. It’s animated, so it goes without saying that Jason Mantzoukas is also in this.

Specifically, it’s stop-motion animation using creepy-ass baby doll puppets for maximum creepiness. It is not, however, a horror series. It’s a noir with the occasional song (often involving the discussion of sex acts) set in the worst place in America, Ultra City. It’s about the murder of a mayoral candidate named Carpenter K. Smith — thought to be the only hope for Ultra City — and the investigation of the seven suspects in his murder, all offspring from different mothers. One is a street hustler who wears newspaper pants, eats rain soup, and peddles back rubs, and another is Lady Andrea the Giant, played by Bebe Neuwirth. “Bubble gum” is slang for a sex act, and the whole thing is narrated by Tom Waits, which is kind of all you need to know about the show.

It’s weird. Conrad, who started his career writing sentimental studio movies (The Weather Man, Wonder, The Secret Life of Walter Mitty) seems to be running in the opposite way as hard as possible. It feels like a middle finger to Amazon and Epix for shitcanning his previous series, as though Conrad is saying, “Oh, you thought that was weird? I’ll show you weird. How about a stop-motion neo-noir with pantsless baby dolls and Kristen Bell voicing the wife of ‘Congressman Pecker,’ who ditches her husband during his apology press conference?” It’s not inaccessible, exactly, but it’s niche. Did you like the really strange parts of Patriot? Steven Conrad distills all of that into Utra City Smiths.

I’m not entirely sure, either, how Conrad continues to attract the collection of character actors that follow him around, except that his work is literally like nothing else on TV. It’s smart and funny and out there and I feel like his regulars must both trust and adore him and appreciate that they are given the opportunity to do something different. Still, after three episodes (or half the first season), I have no idea what to make of Ultra City Smiths, except that I’m in. It’s the kind of series that may only attract 17 viewers (at least 5 of whom write for this site), but we’re going to be very passionate viewers, and when AMC+ invariably cancels it after one season, we’ll rail against the futility of it all and rewatch Patriot all over again.