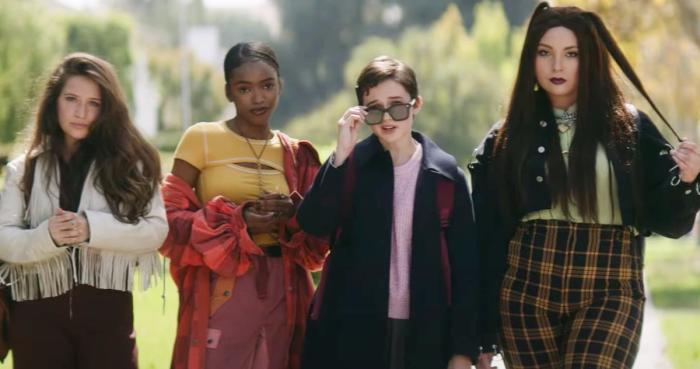 With ‘The Craft: Legacy’ Dropped on PVOD, Blumhouse Shows How It Values Female-Made Horror

Since breaking through with the surprise hit Paranormal Activity in 2009, Blumhouse Productions and founder Jason Blum have become horror tastemakers, spawning successful franchises like Sinister, Insidious, and The Purge, as well as the Academy Award-winning Get Out. This horror studio has taken chances on new filmmakers and brought seasoned artists across genre lines. Yet Blumhouse didn’t deliver a major release of a woman-directed feature until 2019’s Black Christmas. Now, as they slip Veena Sud’s The Lie and Zu Quirke’s Nocturne into a streaming anthology, and dump Zoe Lister-Jones’s The Craft: Legacy to PVOD, Blumhouse has proven their propensity to undermine and disregard their women-directed properties.

Blumhouse has only wide-released one female-helmed film. Their second would have been Zoe Lister-Jones’s The Craft: Legacy, another in their string of bankable adapted IP. However, deep into a pandemic that’s slaughtering cinema releases, The Craft: Legacy is being unloaded onto PVOD. Sure, the studio couldn’t have foreseen the global emergency that tore apart theaters, but the highly anticipated reboot of the women-led favorite was stealthily dropped with about a month of lead time, leaving hardly any room for press, promotion, or fanfare. Much like the end of the world, it came with a whimper, not with a bang.

Speaking to Forbes, Blum defended the quick drop of The Craft: Legacy and his insistence it be released this October. He noted that waiting until next year wasn’t an option since, “who knows, even next October there may be no vaccine.”

Yet, in the same interview, when asked about David Gordon Green’s Halloween Kills, which has so far been delayed from this October until 2021, Blum said on its possible change, “If this is still going on next Halloween? No, we’re not holding it. Halloween Kills is coming out next October come hell or high water, vaccine or no vaccine. It is coming out.”

The seeming lack of faith in The Craft: Legacy on the part of its own production company is distressing. It’s easy to lament the unforeseen pandemic, but Blumhouse has not pulled back on its other major releases including Freaky. The body-swap slasher directed by Christopher Landon was given a Beyond Fest drive-in premiere and has been promoted all over social media and major press outlets, taking the cover of the again-resurrected Fangoria.

Prior to doing The Craft: Legacy this dirty, the company surprised fans with Welcome to the Blumhouse, a Prime Video collection that featured four films directed by marginalized filmmakers. This anthology has been touted as a visible project giving space to women and people of color. However, it can’t escape feeling like a promotional dump of four features that Blumhouse didn’t trust to stand on their own feet. Such trust was afforded to the critical and financial bombs that were 2020’s male-directed The Hunt, Fantasy Island, and You Should Have Left.

The unequal treatment across gender lines is disappointing but not surprising coming from the prolific studio. In 2018, Blum came under fire for a Polygon interview wherein he defended his studio’s abysmal record with female creators by stating, “There are not a lot of female directors period, and even less who are inclined to do horror.” A peripheral glance at horror features stirs up names like Jenn Wexler, Jill Gevargizian, Karyn Kusama, Issa Lopez, Gigi Saul Guerrero, and countless others who are creating horror shorts and working prolifically in other genres.

Neglecting to consider female creators across genre lines, Blum, in the same interview, boasted, “I believe in using directors who aren’t necessarily from horror, like Jordan Peele or [Halloween director] David Gordon Green.”

Shortly after horror fans and creators rallied against the glib statement, Blum apologized, clarifying his point and committing to “do better.”

Yet since the apology, Blumhouse has repeatedly failed to give women creators equal fanfare to their male counterparts. At the time of this ‘clarification,’ Blum was promoting Green’s Halloween, which premiered prominently at the Toronto International Film Festival. At that same fest, Blumhouse debuted Veena Sud’s The Lie, which was shelved for two years until its inclusion in Welcome to the Blumhouse.

Prior to working with Black Christmas (2019) director Sophia Takal, Blumhouse released two woman-directed features: Plush (2013), a thriller that opened in just ten theatres, and The Keeping Hours (2017), a straight-to-DVD thriller. They then tapped Takal, a director with a robust thriller and horror-heavy resume, for an Into the Dark installment, New Year, New You. It was only after proving herself with the TV anthology offering that Takal was then granted a theatrical feature helm.

With a fearlessly feminist message, Black Christmas struck a nerve, inspiring famous horror host Joe Bob Briggs to declare that he preferred horror from the ’70s and ’80s when they had “no political ax to grind.”

What I love about directors from the 70s and 80s is that they had no political ax to grind, no message, no social justification for horror. It was just "get a load of this great story." I don't wanna be told how to watch a movie. @Shudder@kinky_horrorhttps://t.co/cSaGAgTJuI

Yet horror from the ’70s and ’80s was fiercely political, be it Tobe Hooper’s The Texas Chainsaw Massacre (1974) taking on ’70s counterculture or John Carpenter’s They Live (1988) criticizing consumerism. The original Black Christmas (1974) even tackled abortion rights the same year the Roe v. Wade decision was passed. Therefore, rebooting it with a feminist message is exactly in line with Blumhouse’s insistence that adapting previous IP “is sequel-izing or rebooting the feeling of the original movie and its iconography.”

Takal and Black Christmas co-writer April Wolfe took heat from critics and detractors, but none stuck out as more of an undercut than when Blum himself interacted with one of the angry tweets. After boasting about the success of Leigh Whannel’s theatrically released The Invisible Man, Blum was met with a comment that berated Black Christmas for its “identity politics” and “agenda.” Blum replied, “I hear ya and agree,” and promoted two other male-directed features (The Hunt and The Invisible Man), effectively undercutting his studio’s only major theatrical release directed by a woman. 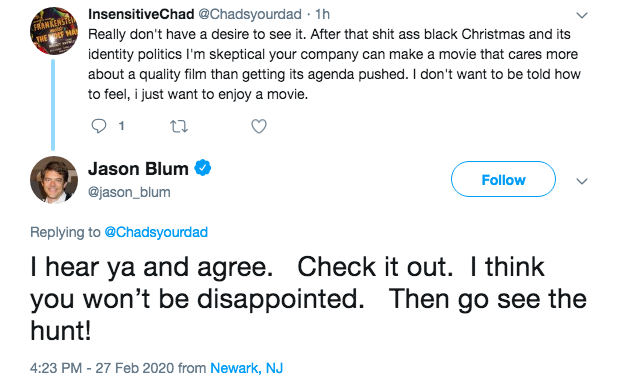 After purporting to regret his brash and ignorant statements on the availability of female filmmakers, Blum’s company has not changed course. Instead, they not only neglecting to work with female creators but undermining them when they finally do. As the 2020 Halloween season barrels towards a climax, Blumhouse has tossed out its women-made horror features like scraps.

Blumhouse continues to release groundbreaking horror features across multiple media, but still has a giant woman-shaped hole in its roster. They’ve done an excellent job uplifting the work of minority creators and creating space for new voices in their anthology series. But twenty years into the company’s existence, and ten years as genre giants, Blumhouse still owes women creators better. Of their stacked upcoming slate, only one film is female-helmed (Shana Vesta’s Run Sweetheart Run). Jason Blum’s blindspot for women filmmakers has created a studio that undervalues its female-helmed features, setting them up for obscurity and failure. Having committed to doing better two years ago, Jason Blum has still not done the necessary work to give women more opportunity, more visibility, and more faith in their features.

The Lie and Nocturne are now available on Amazon Prime. The Craft: Legacy will hits On Demand today.