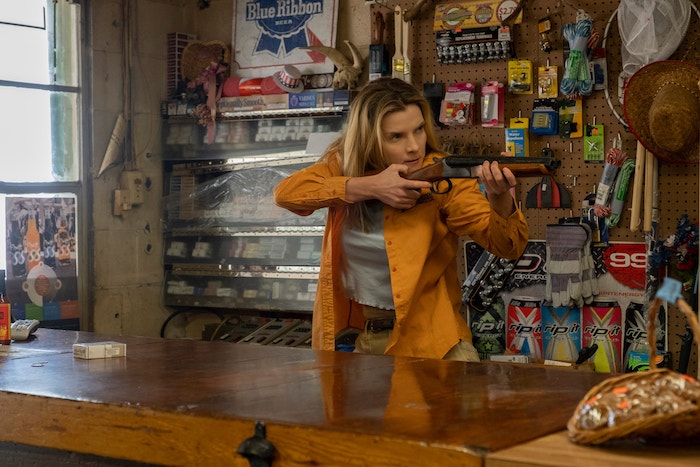 Review: 'The Hunt' Chases its Own Tail for Two Hours Because F*ck You, That’s Why

Let me start with the good news: Betty Gilpin. I will not say anything bad about Betty Gilpin, because there is nothing bad to be said. To the curt, cutthroat survivalist Crystal she brings depth and gravitas in spite of The Hunt’s self-congratulating wasteland of a script. Watching her here is attending a masterclass. She creates something from nothing, it’s genuinely magical. Maximum number of stars and thumbs up, truly outstanding work.

There is also something to be said for The Hunt’s use of sound. The film makes very effective use of various gloopy, squishy, and crunchy noises to texture its pervasive gore. Credit where credit is due.

The bad news is the rest of it.

The Hunt is messy. Not fun, spill-the-tea messy—annoying, fruitless, small-child-made-a-mess-of-the-kitchen-without-producing-anything-edible-to-show-for-it messy. The new film from director Craig Zobel (Compliance, Z for Zachariah) is a conspiracy thriller Mad Lib where someone filled in all the blanks with a random selection of divisive trending Twitter hashtags. Why? Because f*ck you and your little dog, too. Isn’t that so daring and clever? This movie certainly thinks so. It’s utterly convinced it’s Mensa-qualifying for taking cheap shots at everything and everyone. The one target spared is George Orwell’s Animal Farm. On the one hand, fair enough, that’s a quality piece of literature right there. On the other hand, while not quite sinking to the level of enemies bonding over moms named Martha, it’s still far too close for comfort.

The Hunt is an ugly, jumbled mess of a story and it’s not especially pretty to look at either. Visually, it displays minimal stylistic innovation or verve, opening with a dim, bland close-up of a smartphone screen as a lazily expositional group text conversation meanders along that sets the tone for the largely uninspired cinematography that follows.

While The Hunt’s marketing campaign has leaned heavily on its “outrageous” ripped-from-Breitbart premise of liberal “elites” hunting blue-collar conservative “deplorables” for sport, it’s not actually InfoWars-sponsored content. The film is a double-edged sword of a skewering satire—or at least it’s trying to be, but to what end and for what audience is confoundingly befuddled. It’s mostly just grabbing the knife by the blade instead of the handle in a desperate attempt to be edgy. It bleeds all over the place and looks ridiculous.

Arguably the most cutting blow this film delivers is that it was co-authored by Nick Cuse and Damon Lindelof, who has managed to follow up the magnum opus of the HBO Watchmen limited series with a true stink bomb of a dud. Then again, the contrast between Lindelof’s television (Lost, The Leftovers) and film credits (World War Z, Tomorrowland) does feel a bit like the study of the duality of man.

The outrageous premise isn’t even all that outrageous in the sense that it’s hardly original or unique even among releases from the past year. In addition to being a loose adaptation of Richard Connell’s 1924 short story “The Most Dangerous Game,” it’s also the basic premise of the genre-bending Brazilian weird Western Bacurau, a film that understands how to be fiendishly controversial in the way The Hunt strives to be while also having brains, heart, and a robust sense of humor that does not consistently settle for picking the lowest hanging fruit.

Being a smartass is completely valid, but as the term itself indicates, it necessitates being clever. The issue with The Hunt is that calling everything dumb does not magically make you smart. It mocks racists and bigots and those who would nitpick over gendering language all the same, as if these are sins warranting comparison, and then pats itself on the back for making it clear that it would also deem a critic like myself unamused by such grotesque false equivalences an annoying hairsplitter. Watching this film is an unwanted stroll down memory lane to the sort of elementary school playground mentality that deems clapping back with “your mom” or “infinity plus one” surefire ways to win an argument.

The Hunt attempts to comment on the trolling, fake news, Twitter discourse dark side of internet culture while also taking great pleasure in being a troll. Commenting on the shortcomings and hypocrisies of The Discourse is a worthy cause, but in both approach and execution, The Hunt is a major misfire, a spineless regurgitation of said discourse into a movie-shaped vomit dish. It’s a film that feels more in need of a diagnosis for whatever convoluted complex it evidently suffers from than a review, but alas I am no medical professional. That said, I do feel fully qualified to say that The Hunt is a limping dumpster of a film that holds little appeal regardless of your political persuasion.

← Reddit Asks the Question: 'What Only Exists Because of People's Stupidity?' | What Have 'The Kids In The Hall' Been Up To? →