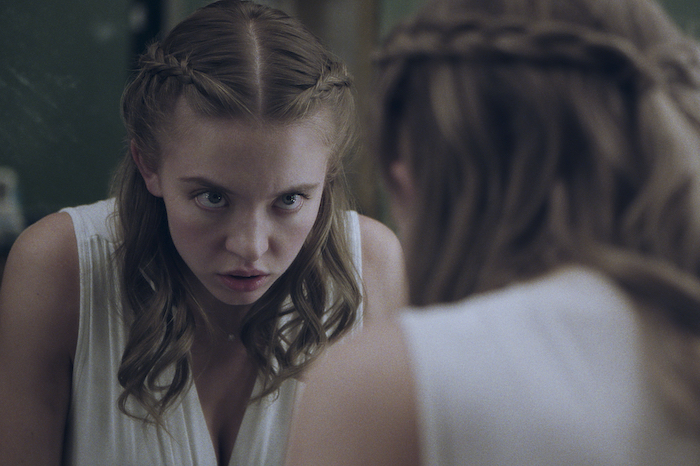 Review: Spooky if Familiar Faustian Bargain ‘Nocturne’ Will Do in a Pinch

A hyper-competitive elite boarding school for aspiring musicians. Sisters dueling for supremacy. A demonic notebook. Nocturne, the feature debut of writer-director Zu Quirke released this month on Amazon Prime as one of four films included in the Welcome to the Blumhouse anthology collection throws a bunch of beloved horror tropes into a blender with a dash of Amadeus for taste. There’s absolutely nothing in it especially new or innovative, but it’s also the sort of film that has the common sense to know that and not pretend otherwise.

Nocturne is formulaic but well-executed, the sort of eerie easy viewing you put on because you enjoy said formula; the horror equivalent of the appeal found in Law & Order: SVU or the sorts of romance novels that feel like they’re written by a Mad Libs style template in collaboration with a random word generator. You go in knowing exactly what you’re getting, and then you get it, it’s executed competently, and you leave satisfied and unsurprised, the end. It’s not reinventing the wheel but it’s a competent debut and solid piece of small-scale filmmaking.

The film tells the story of Juliet Lowe (Sydney Sweeney), a single-minded aspiring pianist who puts in all the blood, sweat, and tears that American mythos tells us is supposed to be the key to success but finds herself in the shadow of twin sister Vivian (Madison Iseman) regardless. While Vivian manages to have her cake and eat it too, relatively popular with a charming boyfriend and a secured spot at Julliard, Juliet put all her eggs in one basket and is coming to the horrible realization that she is going to end up with nothing to show for it.

When the class prodigy and social outcast “Mad Moira” dies by suicide, her coveted solo slot at the end of year show becomes up for grabs once more. Continuing her charmed streak, Vivian is the shoo-in to replace her, but Juliet throws her hat in the ring, too. This time, she’s got a trick up her sleeve: Moira’s mysterious notebook filled with ominous occult drawings, which appears to bestow performance-enhancing powers, albeit at a hefty cost.

Quirke’s script is efficient, which I do not entirely intend as a compliment. Each scene serves a clear purpose in terms of furthering the plot and gets the job done, albeit without much in the way of bells or whistles attached. Overall, it works fine, but it’s the sort of story best appreciated in a surface level sort of way. If you start asking questions, you’re only going to run into plot holes and more questions, like ‘does this school even have classes? I don’t understand’ or ‘does this place only have one hallway?’ It’s a script that barely ekes into the realm of ‘fine, I guess,’ but it’s a good enough foundation that’s ultimately elevated through solid technical execution. While there’s no hiding that this is clearly a very modestly budgeted feature, the sparing moments of VFX are chosen wisely and well-executed.

The has never been, and there never will be, any shortage of films dedicated to the divine-and-or-demonic ecstasy-and-or-agony that is the pursuit of artistic greatness, and within that well-populated wheelhouse, the particulars of Juliet’s character and the struggles she faces are hardly new. It’s an effective combination nonetheless, especially thanks to Sweeney’s commendable performance, which brings additional nuance to the character and handles Juliet’s balance of soft-spoken repression and single-minded musical passion remarkably well.

If you want a film that will change your life, Nocturne is not what you’re looking for. But if you’re in the mood for something new and spooky that’s easy to watch and pairs well with chowing down on Halloween candy from the comfort and safety of your sofa, it’s a solid option.

← Original 'Charmed' Stars Were Being Petty About the Reboot and Got Called Out | Ode to a Butterfly: On the Symbol in 'Antebellum' and 'Possessor Uncut' →