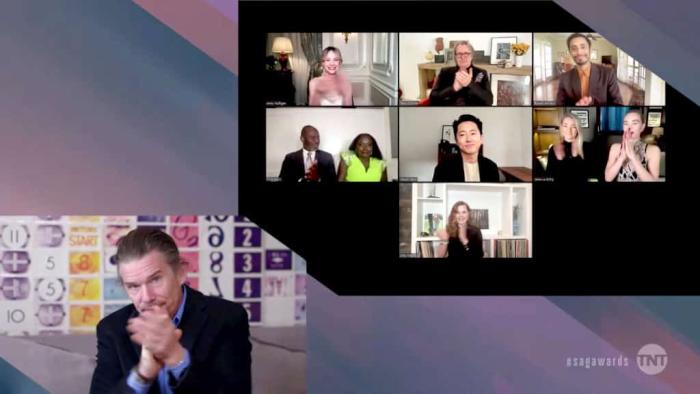 The 27th SAG Awards were held on Sunday as a virtual event, another sign of the COVID-impacted nature of the 2021 awards season. Still, despite the truncated nature of the ceremony and the forever shaky nature of Zoom acceptance speeches, it was a striking night with history being made in a big way.

While the win was kind of an anti-climax, it was somewhat expected given that The Trial of the Chicago 7 is one of the few traditional ensemble films of prestigious quality in this awards season. Really, it’s the most awards-esque film of 2020. But it was good news for Michael Keaton, who set a new record by becoming the first person to be part of three SAG-winning ensembles. The best Batman keeps on winning. Literally!

Taylor Simone Ledward, Boseman’s widow, accepted the award on his behalf. She thanked the cast and crew of Ma Rainey’s Black Bottom and quoted her husband: ‘If you see the world unbalanced, be a crusader that pushes heavily on the seesaw of the mind.’

Viola Davis practically fell out of her chair when she won, which was a wonderful moment that will definitely be a gif by the time this post is up!

Perhaps the most emotional moment of the night came when Youn Yuh-jung won Best Supporting Actress for Minari. The supporting actress award this year is pretty much up in the air, with no real front-runner, so this was definitely a surprise for all. Check out her wonderful speech, her grandson photographing the moment, and the awestruck faces of Olivia Colman and Glenn Close!

In the TV world, the top awards went to The Crown and Schitt’s Creek for ensemble in a drama and comedy series. Jason Bateman took home Male Actor in a Drama Series for Ozark, a show that exists, while Jason Sudeikis beat the Levy boys for Male Actor in a Comedy Series for Ted Lasso. Catherine O’Hara and Gillian Anderson won for the women, while stunt awards went to both The Mandalorian and Wonder Woman 1984. Here are the winners!

So, what does this all mean for the Oscars?

We’re so used to stuff like the SAG Awards being precursors for the Academy Awards. Last year, the four acting winners swept the board from the Golden Globes onward, meaning that the Oscars ceremony was almost startlingly predictable. This year, not so much. We saw no love for Nomadland here but that doesn’t mean it isn’t a major frontrunner for the Oscars. It’s just not really a traditional actors movie.

Some awards are more sewn up than others. It seems safe to predict that both Boseman and Kaluuya will be victorious, but it’s not so easy to call for the women. Davis didn’t win the Golden Globe and she’s not even nominated for a BAFTA but that doesn’t mean she’s out of the running. The same goes for Carey Mulligan in Promising Young Woman. Jodie Foster won the Globe for supporting actress but isn’t up for an Oscar. Critics awards have been all over the place. The bookies’ odds in the UK have Maria Bakalova as the frontrunner but seriously, anything could happen. And that’s so cool! It’s fun to have an awards season that isn’t painfully obvious. They have a real opportunity to go out of their comfort zone. Granted, they could revert to their old tricks and Chicago 7 it up all night, but that doesn’t feel as likely as the more interesting alternative.

Dare we hope that things will be different this year? Maybe?