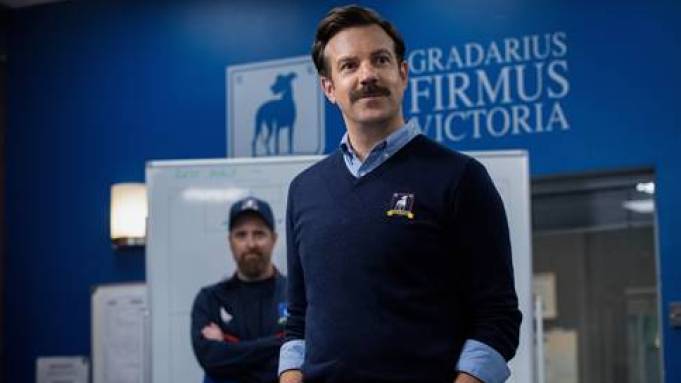 Review: 'Ted Lasso' May Be the Second Coming of Leslie Knope

I completely adore Ted Lasso (now on Apple TV+). The series from Bill Lawrence (Scrubs, Cougar Town) and Jason Sudeikis has basically the same energy as this Sudeikis character the moment he jumps onto the dance floor:

The title character, played by Sudeikis, is basically that character combined with the relentless optimism that Amy Poehler’s Leslie Knope brought to seven seasons of Parks and Recreation. Sudeikis has played wiseacres and douchebags for so many years now that I’d actually started to think of him that way, but Ted Lasso completely altered my perception of the Horrible Bosses star. Likewise, while Bill Lawrence has always been one of my favorite showrunners, Lasso feels like the commingling of Lawrence’s sense of humor with Mike Schur’s sensibility. It’s funny, and heart-swelling, and infectious. I absolutely love it.

Ted Lasso is an American football coach from a mid-tier program who went viral after cameras caught him goofily dancing with his players after a championship victory. It’s the sort of video that could fuel Upworthy for months. Rebecca (Hannah Waddingham), a wealthy Brit who inherited her ex-husband’s soccer team in the divorce, decides to hire Lasso — who has zero experience with European soccer — to coach her major league soccer team. He accepts, not knowing that the only reason Rebecca hired him is because she wants to drive her ex-husband’s team into the ground to spite him.

Lasso has a sort of local yokel quality, and I have seen some describe him as “clueless” or “oblivious,” which could not be further from the truth. He’s a good person; he likes people and sees the best in them; and he’ll put the feelings of others over his own. We live in a world now where that is seen as “clueless.” Ted Lasso believes, regardless of the sport, that he can help motivate these players. “I don’t care about wins or losses,” he tells a skeptical reporter. “I care about making them the best players they can be.” From there, the wins will presumably flow naturally.

Lasso has his work cut out for him, however. The owner hired him to fail; crowds chant “wanker” at him; his team captain thinks he’s an idiot; and his best player is a narcissistic diva who doesn’t know how to play as a team (although his star player’s girlfriend, played by Juno Temple, quickly befriends Lasso, which may prove to be a problem later in the season). Meanwhile, Lasso and his quiet-but-effective assistant coach (Brendan Hunt), are basically relying on the equipment manager for knowledge about the game of soccer. But it turns out, if you put your faith in someone and believe in them, they can be surprisingly helpful, too.

And the thing is, after three episodes, it seems to be working, or starting to, anyway. There’s a very underdog sports-formula at play here, so we can sort of see where the momentum is heading, but underdog formulas work for a reason. What is unique about this series — beyond the fun fish-out-of-water American football coach trying to coach European soccer — is the character himself, and Sudeikis is the very definition of “a delight.” He’s got early Vince Vaughn charm combined with all the characters from Trial and Error crammed into one. I cannot say enough about how much I am legitimately enjoying this show — it’s enthusiastically honest, and unfailingly likable. It is terrific.

← Ryan Reynolds And Mint Mobile Wade Into The Streaming Platform Wars... Kind Of | Things Are Getting Uglier For Chrishell Stause of 'Selling Sunset' and Ex Justin Hartley →