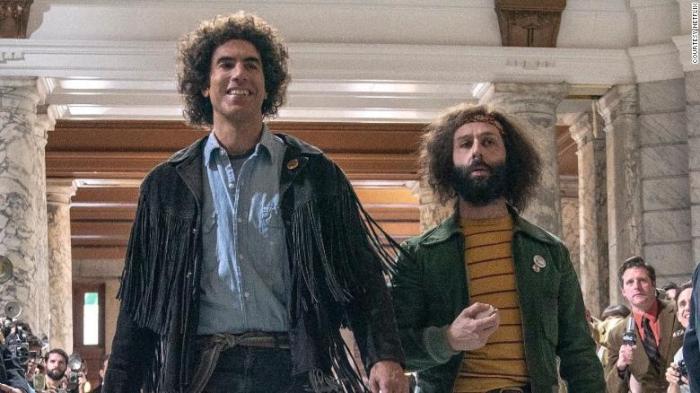 Aaron Sorkin's 'The Trial of the Chicago 7' Review: Jam Me, Jack Me, Push Me, Pull Me, Blow Hard

The Trial of the Chicago 7 is the perfect vehicle for Aaron Sorkin. It’s the civics lesson of West Wing crossed with the courtroom scenes of A Few Good Men (and Sorkin’s To Kill a Mockingbird on Broadway), the cultural commentary of The Social Network, and the speechifying of … everything that Sorkin has ever done. But that works to his keen advantage in a movie about counter-culture speechifiers delivering a future civics lesson. Sorkin may have fallen out of favor in recent years, but The Chicago 7 is easily the best thing he’s been associated with since The Social Network: A rousing ode to civil disobedience, to progressivism, and most of all, to giving a middle finger to the powers that be. Sorkin has written the grown-up version of Pump Up the Volume (a movie itself no doubt inspired by the counter-culture movement), and Eddie Redmayne is the Christian Slater and Mark Rylance’s William Kunstler is the plastic fork poised to stab teachers in the cafeteria.

I would like to say, too, that Chicago 7 is the perfect movie for “these times,” but there is a scarcity of countercultural icons during “these times.” Our inspirational figures, unfortunately, are too often dead — Breonna Taylor, George Floyd, Ahmaud Arbery — and our 2020 icons are too often TikTok stars. Hell, the closest thing we have to a Jerry Rubin or an Abbie Hoffman or Tom Hayden is The Squad — literal members of Congress — or the high-school activists that have risen out of school shootings. Hundreds of thousands of people have taken to the streets over the last four years, but the media is too often consumed with Donald Trump himself to give attention to the heroes. We have Reality Winner, and we have Colin Kaepernick, but where is our epic six-month political trial? Our voices are too often viewed through the prism of the President. The problem with the Trump era (among many, many things) is that it’s about Trump to the exclusion of everyone else (including, practically, the man currently leading in the polls).

That was not the case in 1969 when Abbie Hoffman, Jerry Rubin, David Dellinger, Tom Hayden, Rennie Davis, John Froines, Lee Weiner, and Bobby Seale were indicted and charged under the anti-riot provisions of Title X of the Civil Rights Act after violence broke out over the course of five days and nights at the Democratic Convention of 1968. Sorkin’s movie distills that six-month trial into two hours, and while I wasn’t around to witness the events in ‘68 and contrast it with this film, it seems to successfully capture its spirit, even if it is slathered in a Sorkinese sheen.

And make no mistake: It’s very Sorkin; in fact, I think there’s a supercut going around, as there is with every new Sorkin project, revealing all the ways in which he has plagiarized himself. Sorkin’s got a limited bag of tricks; he’s very easy to mock, and he’s very bad at writing women. However, conveniently — aside from a small secretarial role — there are no women characters in the Chicago 7, so there’s nothing to keep these characters from measuring their dicks against each other using rhetorical flourishes and oblique references to the Constitution.

It’s also the first role in which I have ever loved Eddie Redmayne (this is a very hard thing to admit for me). He plays Tom Hayden, the respectable face of the anti-war movement whose methods are more pragmatic, while Abbie Hoffman (Sacha Baron Cohen) and Jerry Rubin (Jeremy Strong) are the attention-seeking dirty hippies of the anti-war movement. In many ways, The Trial of the Chicago 7 is about a confrontation between the Chicago 7 and Nixonian governmental forces represented by Judge Julius Hoffman (Frank Langella), but within the 7, it’s also a power struggle between Hayden and Hoffman over how to confront those forces: with anarchy and courtroom stunts or by winning elections? That dynamic between Hayden and Hoffman is often the best part of the movie, although Strong’s Rubin offers some droll comic relief; John Carroll Lynch’s David Dellinger makes big impacts in small scenes; and Joseph Gordon-Levitt’s prosecutor Richard Schultz plays the most Sorkin of characters: A fair-minded prosecutor with sympathy for the defendants (ha!).

Meanwhile, Yahya Abdul-Mateen II’s Bobby Seale — who is tried alongside the 7 for several weeks, anyway — sits next to them but is off in his own storyline dealing with a host of other problems specific to a Black man or — more specifically — the leader of the Black Panthers. The stakes are considerably higher for Seale, literally life and death, which has a way of transforming the legal battle taking place into something more akin to an intellectual exercise. There are obviously stakes involved — prison sentences for contempt of court and guilty verdicts are on the line — but it still feels like shaping history is their paramount concern, which is a luxury that Bobby Seale does not necessarily have.

Sorkin writes and directs here, and he’s far more surehanded than he was in directing the lackluster Molly’s Game, although Sorkin still seems to be directing with a small screen in mind. The Trial of the Chicago 7 is very good, but it’s not particularly cinematic, which makes Netflix a suitable home for the Paramount film, which will almost certainly land Oscar noms for writing, if not gain some consideration for the performances of Redmayne, Rylance, and Sacha Baron Cohen, notwithstanding his bad American accent. Mostly, though, it feels like a history lesson that has been turned into something akin to a heist film: It’s funny, entertaining, and inspiring, the sort of film that makes you wish times were a little more normal so that we, too, could thumb our noses at the Administration via six months of political grandstanding.


← Who Are the Historical Members of the Secret Society in 'A Babysitter's Guide to Monster Hunting?' | 5 Shows After Dark: 'America's Book of Secrets' on History First Season Finale, 'The Bachelorette' on ABC →