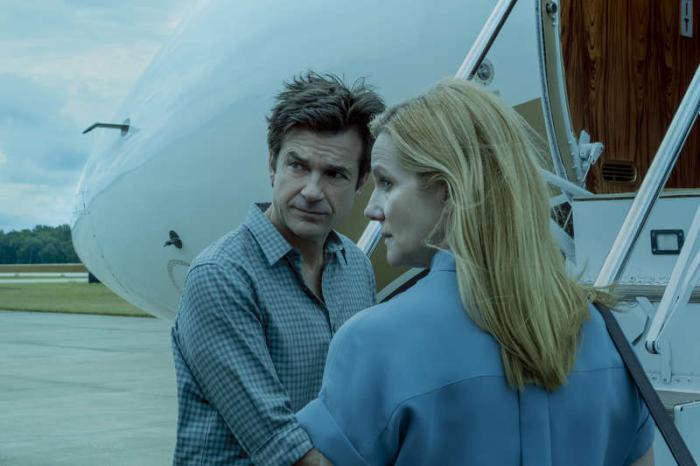 Let's Talk About the Ending of Season 3 of 'Ozark'

The third season of Netflix’s Ozark felt like slowly, slowly, slowly pulling back the rubber band of a slingshot for roughly 9 hours, 59 minutes, and 30 seconds before unleashing it in the final ten seconds before the credits roll. Or like one of those Rube Goldberg contraptions that takes 6 days to erect and only 30 seconds to execute. It’s all set up, and very little punchline, and that’s all the more disappointing in season three because that big, climactic moment feels like less a climactic conclusion and more like the first move in setting up season four.

In season three of Ozark, Jason Bateman’s pursed-lip expression never changes; Laura Linney’s character admits that her motivation is avoiding the banality of regular existence, even if that means endangering her children and giving the green light in the execution of her brother; Wyatt — who is barely out of a high school — carries on a sexual relationship with 70-year-old Darlene Snell, because it’s the easiest (and ickiest) way to keep these two characters involved in the series; and Ruth falls in love with the aforementioned brother of Wendy Byrde, which is less a fully-fledged storyline than it is another belabored set up for season 4.

In fact, all of season three feels more like a bridge to season four than a stand-alone season, not that it doesn’t pass the time. It’s grim, and it feels like being trapped inside of an Instagram filter, but it is absorbing, even if it is paced like molasses traveling through a glacier. Laura Linney and Julia Garner are such a pleasure to watch, though, and Janet McTeer is solid as the Byrde’s venomous lawyer, Helen, even if she does strike me as “Mean Jane Lynch.”

Here is the entire season in a nutshell: Marty has things fairly well under control, aside from a new FBI agent investigating their casino, Special Agent Maya Miller. However, Wendy wants to up the stakes and grab some control of the operation, so she decides unilaterally to get the family involved in a money-laundering operation with the Mexican cartel that requires buying a second casino. Marty is not happy about it. Wendy and Marty also go to a marriage counselor, but both bribe their therapist to provide the answers they want to hear until the therapist learns too much and has to be murdered.

Meanwhile, the cartel kidnaps Marty for a couple of episodes to kill some time, and even when he’s being tortured, Bateman’s expression barely changes. Wendy’s brother, Ben (Tom Pelphrey) pays them a visit, and he’s funny and charming, and he and Ruth hit it off. About halfway through the season, however, we find out that he’s mentally ill, and he goes off his meds so that he can have sex with Ruth. Off his meds, he falls apart. His big sin, however, is telling Helen’s daughter what Helen does for a living — she’s a lawyer for a cartel — and that puts Ben on Helen’s shit list. Eventually, Ben is moved from the shit list to the kill list, and Wendy basically has to acquiesce to the execution of her own brother because Wendy and Marty Byrde are the actual villains of Ozark.

That’s the key here. The Byrdes have moved from Walter White to Heisenberg territory. They are no longer anti-heroes. They are the bad guys, straight-up. And sure, even bad guys like to protect their children, but Wendy and Marty aren’t killing in order to save themselves — Wendy and Marty don’t even like each other. Murder is now an offensive move. Even if they’re not the ones who pull the trigger, they orchestrate the moves to ensure that others die. They don’t do it out of greed, either. They do it out of hubris.

By the end of season four, Marty and Wendy have alienated Ruth, who has become the Jesse Pinkman of Ozark, and who decides to align with Darlene Snell, the 70-year-old woman sleeping with Wyatt (she’s the profoundly disturbing Mike Ehrmantraut). Darlene may be a drug kingpin, but she’s got a code. She understands loyalty (and she blows off a guy’s dick with a shotgun to illustrate it). She protects her own, and in the fourth season, I expect that Darlene and Ruth will be pitted against Marty and Wendy. I doubt by then if anyone will be left to root for Marty and Wendy. I’m not sure there are any people left now, not after Wendy gave her brother up to a hitman, and not after Marty so casually and indifferently cremated Ben, as though it were just another transaction.

The whole season ends in Helen’s attempt to poison Marty and Wendy to the cartel head, Omar Navarro, and get them killed, but Marty and Wendy beat her to the punch, turning Omar Navarro against Helen. Omar has Helen shot in the final seconds of the season, and he hugs Marty and Wendy and welcomes them into their partnership, even as Helen’s brains drip off their faces. We aren’t, however, privy to the behind-the-scenes machinations. We don’t understand why Navarro chooses them over Helen, and we may never find out why because by the time season four rolls around — assuming that it does — the show will be onto a new Rube Goldberg contraption.

← They Say We All Die Twice; Paul Walker's Second Life is Still Going Strong | 'Home Before Dark' Season 2 Might Answer These Lingering Questions →