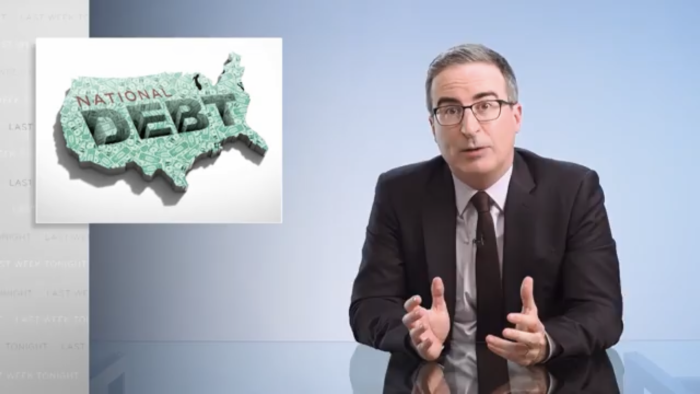 I am not a … “Math Person.” I can count. I can add and subtract. Division and multiplication? No sweat. Anything beyond that and my eyes start glossing over. It’s just never been my strong suit.

AND YET …
I was surprised to find myself not only engaged with John Oliver’s recent deep dive into America’s National Debt on his show Last Week Tonight. I’d even go as far as to say I understood it! So let me see if I, the “Economist Equivalent Of Two Kids In A Trench Coat Pretending To Be An Adult,” can explain it.

For those who are unfamiliar, the National Debt is based on how much money we owe as a country and it’s super high. Almost thirty TRILLION dollars, which, let’s be honest, is crazy high. Even I, “Super Adequate At Math Guy,” can’t wrap my brain around it. But wait, there’s more!

Tied into the debt is the Deficit. Essentially, it’s the difference between how much we, as a country, are spending and how much we owe. That’s it in a nutshell. It’s actually pretty simple, but as Oliver pointed out, there are those *coughrepublicanscough* who would seek to make it more complicated. For instance, they often present this idea that we owe most of that money to other countries like China when in actuality, foreign debtors only make up a third of the debt.

Is this making sense? I’m asking sincerely. Even as I write this, a baby lying sleepily on my chest (HIM SO CUTE), I’m wondering if I’m oversimplifying or not simplifying enough. Oliver went over all of this and more and, despite me being “Mega Good At Math,” it is probably best to leave it up to him now.

Check out the clip below and if I’ve made any missteps, let me know!