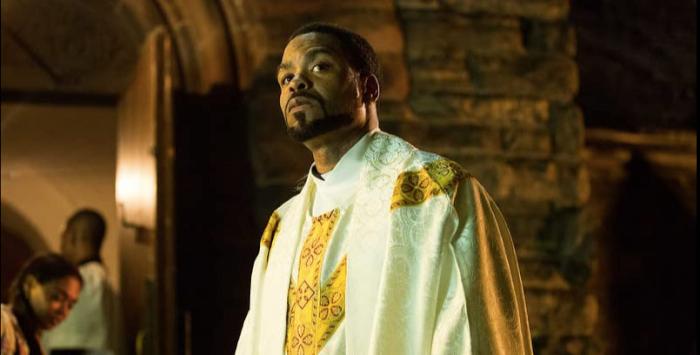 Review Round-Up: All The Horror Movies We've Reviewed This October

This October, at-home audiences are spoiled for choice between the tricks and treats of Halloween horror. We know you might be overwhelmed. So, we’re rounding up the horror movie reviews we’ve posted this month, so you can go into your weekend with a watch list at the ready!

12 Hour Shift Now on demand.
“This is a movie that is deliciously deranged, unpredictable, and fun. The swerves in tone, dashes of genre, and wilful lunacy of it all throws audiences into the thrilling yet dizzying sensation of staying up, way, way too late.” —Kristy Puchko

32 Malasana Street Hits Shudder on October 23.
“A family moves into a new home in hopes of a new start, but the past won’t be left behind by the living or the dead. This is the story of 32 Malasana Street, a Spanish haunted house thriller steeped in dread and suspense.” —Kristy Puchko

Black Box on Prime Video.
“There’s so little to say about Black Box’s characters or themes because the script is wearily ornamented around a single, lackluster twist. The twist divides the film into two smaller movies, either of which could have made for interesting dissections of memory, grief, fatherhood, and toxic masculinity if given a full feature. But Black Box’s desire for misdirection makes both of its main storylines feel super slight.” —JM Mutore

Bleed With Me From Nightstream.
“This is an intimately set horror offering that pulls its terror not only from the monsters lurking within but also from the traumatic emotional toll its characters push upon each other. It’s moody, melodic, and moving. In short, Bleed With Me is one to watch out for.” —Kristy Puchko

Bloodthirsty From Fantastic Fest.
“The subtext within the horror is not subtle, but it is deliciously surreal. Moses ushers us from shadowy hallways and Sapphic love scenes into sequences of slaughter, flashes of carnage, nightmares that may be hallucinated or horrifically real. With a firm hand, a steady stride, and an implied smirk, she guides us through a scary story of self-discovery. Simply put, Bloodthirsty offers a thrilling journey, lush in style and gore, with a dark heart throbbing hard at its core.” —Kristy Puchko

Boys From County Hell From Nightstream.
“Out of Ireland comes an unexpected new chapter in vampire lore. You might know Bram Stoker’s Dracula. However, the townsfolk of a quaint Irish village say its Transylvania tale was unearthed from local legend. Nowadays, this spooky story is mostly employed to taunt gullible tourists, but when roadwork knocks down a strange landmark, the streets of this town run red with blood.” —Kristy Puchko

Evil Eye On Prime Video.
“The scariest part of Evil Eye might be when Pallavi, nearing 30, admits she doesn’t know how to make chai. Or, when Krishnan attends an engagement party, and a family friend’s wife doesn’t let her husband eat any gulab jamun because it’s not his cheat day. Those are horrors. The rest of this film is just inertia.” —Roxana Hadadi

Hubie Halloween Now on Netflix.
“Hubie Halloween is bad. It’s as lazy and idiotic as every other Happy Madison project over the last decade, and equally wastes the talents of a decent cast (Bowen, Buscemi, June Squibb, Maya Rudolph), whose paychecks I do not begrudge. I don’t even begrudge Sandler for accepting an obscene amount of money from Netflix to make absolute garbage movies and hang out with his friends.” —Dustin Rowles

Hunted From Nightstream.
“Hunted is not for the faint of heart. Its brand of horror is not the heightened stuff of gothic ghosts or gruesome fun of slashers. Instead, Paronnaud exposes the true-to-life horrors of rape culture with a scary story that feels frightfully real.” —Kristy Puchko

Judy And Punch Now on Hulu.
“Judy and Punch contains a lot of violence. However, Foulkes rejects the Punch-and-Judy trope of turning assaults into slapstick spectacle. She will not invite audiences to ogle a man’s attacks on his wife, child, and a sausage-snatching dog. Instead, she keeps the impact of his blows offscreen. Then, she exposes the trauma his violence has wrought through the journey of Judy, a grief-stricken mother and betrayed partner whose face is a map of agony and open wounds.” —Kristy Puchko

The Lie on Prime Video
“What’s unfortunate about the twists and turns crammed into the hour and thirty-seven run time is that the film has no interest in exploring them.” —Lindsay Traves

Nocturne Now on Prime Video.
“There’s absolutely nothing in it especially new or innovative, but it’s also the sort of film that has the common sense to know that and not pretend otherwise.” —Ciara Wardlow

Save Yourselves! Now on digital.
“The core of the comedy is essentially watching two navel-gazing hipsters, obsessed with sourdough starters and internet culture, trying to survive the apocalypse. For example, they know you need a ‘go bag’ of provisions, but they only packed fresh vegetables and frozen seafood for this vacation.” —Kristy Puchko

Scare Me Now on Shudder.
“If you loved You’re The Worst, Scare Me is a must-see. Cash is once again a take-no-shit party girl with an alluringly salty tongue. It doesn’t get old. Instead, it’s fun to see her play against a new partner…Meanwhile, horror fans will revel in the film’s panoply of allusions, from Alien, Jaws, and Halloween to Tale From The Crypt and The Lovely Bones. Yet Ruben succeeds in making a movie that’s better than the sum of its very good parts.” —Kristy Puchko

Vampires Vs. The Bronx Now on Netflix
“The bloodsucking nature of gentrification goes literal in Vampires vs. the Bronx, Directed by Oz Rodriguez, the PG-13 horror-comedy that just hit Netflix centers on three young friends who must battle the evil forces of white vampires, who’ve turned the boys’ hood into their new hunting ground. Brace yourselves, because you’re about to bite into a new family favorite.” —Kristy Puchko

Review: Spooky if Familiar Faustian Bargain ‘Nocturne’ Will Do in a Pinch

Ode to a Butterfly: On the Transformative Symbol, Its Failure in ‘Antebellum,’ and Its Power in ‘Possessor Uncut’