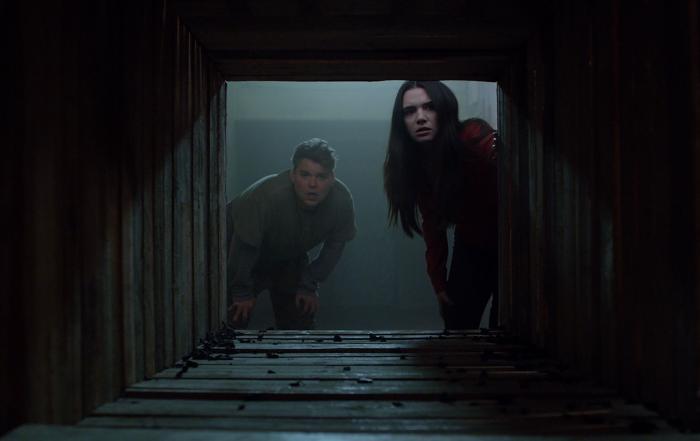 Look, I’ll be honest: This review might be slightly more charitable than the movie really warrants, purely because I’m writing it on Friday the 13th. Is that dumb? Sure. I’m hardly the only person who wakes up in the morning of any given Friday that happens to be the 13th of a month, only to find myself with a hankering for a horror fix. And Haunt, for all its flaws, is a sufficiently slick slasher that’s tailor-made for a day (or night) like this one! It’s comfortingly familiar, but with just enough twists on the tropes to keep you engaged. It’s a little bit clever, but has the confidence to leave the best things unexplained. It has a foolproof premise (a Halloween haunted house goes dangerously awry!) and serious pedigree — written and directed by Scott Beck & Bryan Woods, who penned the screenplay for A Quiet Place, and produced by Eli Roth, who makes a lot of money off of very nasty movies like Hostel. Best of all, it’s coming out in theaters AND On Demand today, so you don’t have to get off your couch to watch it unless you feel like it. So if you’re still trying to figure out what you’re in the mood to watch tonight, this just might fit the bill.

Beck and Woods wrote the scripts for A Quiet Place and Haunt in the same year — 2016 — and in a lot of ways they are two sides of the same coin. Though the films tackle very different corners of the vast horror genre, there is a certain commonality in their execution. The pacing, which is deliberate and razor-sharp in both cases, ratchets tension at a steady, inexorable pace. The premises are simple but precisely imagined. The threats are almost laughably basic but infused with enough mystery to keep them dangerous. Ultimately, the difference is more one of aspiration. A Quiet Place made a name for itself as a film that transcended our expectations of what a monster thriller could be, while Haunt is more like a conscious study of the slasher flicks we grew up on. It’s trying to be the purest distillation of the form, as if the creators were taking apart and rebuilding a clock to see what makes it tick. It’s not an homage. It’s not winking at the audience or trying to thwart us. And it’s not necessarily going to be a movie that upsets you or sticks with you the way A Quiet Place did. For what it is, it’s successful. It gives you exactly what you expect — which is basically the point of slasher films anyway.

Harper (Katie Stevens, The Bold Type) is our college-age Final Girl, with a deeply buried secret in her past and an abusive boyfriend in her present whom she’s trying to shake. For distraction, her roommates take her out to a party on Halloween night, where she meets a pair of friendly enough dudes, and together the gang decides to keep the thrills going by driving out to a haunted house that bills itself as “extreme.” In order to enter, they must sign liability waivers and hand over their precious cell phones — a cost they deem worthwhile once they hear a bloodcurdling scream echo from within the house. They’re hooked on the promise that this haunted house would be something more — more realistic, more frightening, more of an adventure. Isn’t that always the hope when you enter a haunted house? That this time you might genuinely believe in the danger, even as you know you’ll emerge safely out the other side. At first, their expectations are met by a production that is both familiar and elevated. There are cheesy rigged skeletons popping out of the walls, and plastic spiders, funhouse mirrors and trap doors hidden inside coffins, forking paths marked “safe” and “not safe” and even the classic “guess the body part” game made out of pasta and grapes. But there are also touches beyond the ordinary, as actors in costume-shop masks play out scenes of seemingly real danger on other actors, looking like normal Halloween revelers, just beyond reach.

The movie’s greatest strength is in the way it takes its time with the house, setting the stage for the trap that’s slowly being sprung around our protagonists. You will remember more about the individual rooms than you will about any of the characters (I didn’t figure out that the male lead was named Nathan until at least an hour in), and their descent becomes a palpable thing as unease gives way to dread and eventually to fully-realized terror. Injuries mount, but are they due to safety hazards or ill-intent? Actors seemingly break character to come forward and help, but still refuse to take off their masks and reveal their identities. Eventually, the characters have to decide whether to carry on into the unknown or try to trek back through the dangers they’ve already navigated as they try to quit this adventure — and in the process fall into one of the most familiar slasher strategies of them all: Divided, we fall.

There is blood, but the violence is brutally quick. Despite the sometimes Rube Goldberg-ian contraptions that pave the way, this is no torture porn epic. The true nature of the antagonists is both original and kept refreshingly vague. Some things don’t need lengthy third-act explainers to justify them, and there’s even the requisite false-ending! If there’s a sour note, it’s the plot thread involving the abusive boyfriend — a weird double-reverse red herring that thankfully doesn’t take up much of the run time. Ultimately, the movie is just like the house that it depicts: Simple, straight-forward, and almost exactly what you anticipate, but with juuuuuuust enough attention paid to the production to make it more enticing than average.

HAUNT currently streams on Shudder, and is available now on Blu Ray.