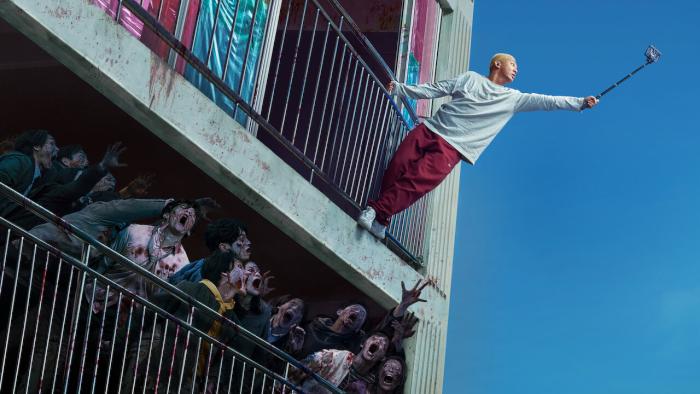 Stream It or Nah? Netflix's Zombie Thriller '#Alive' Is Small In Scale, But Packs a Big Punch

#Alive comes from South Korean director Cho Il-hyung, who directed the movie and adapted it from Matt Naylor’s screenplay, and it operates almost like a bottle episode. The majority of the action takes place in two apartments, in buildings situated across from each other. Oh Joon-woo (Ah-In Yoo) lives in one, and Kim Yoo-bin (Shin-Hye Park) lives directly across from him. In between is a parking lot packed full of zombies, and not the slow, lumbering The Walking Dead kind. They are the feral, swarming fast-moving type, more akin to World War Z walkers.

The film’s first act is set almost entirely in Joon-woo’s apartment, where he has to come to terms with the fact that a virus has infected thousands around him. He barricades himself inside his apartment, and sends out a distress call over the Internet but gets no response. All he can do is watch the zombies from his balcony as they swarm and occasionally take a new victim. As the days go on, and the food runs out, Joon-woo also has to contend with the loss of running water, internet, and phone service. His phone, however, blinkers back on briefly, but only long enough for him to hear his family leave a voice mail recording of their last moments alive. Grief-stricken, Joon-woo tries to hang himself, which is when Yoo-bin from across the way flashes a laser-pointer at him.

The two cannot speak to one another — otherwise, they might call attention to themselves — but they can signal to one another and eventually exchange food items through use of a zip line. They form a kind of bond, as they contend with the zombies and hopefully await rescue.

Clocking in at 99 minutes, #Alive feels even more brisk than that. It’s tight and fast-paced, the characters do a lot with the little space they have, and the action sequences are appropriately tense and disturbing, but there are also a few doses of humor. Given the quarantine era, it also feels sufficiently chilling, although our shelter-in-place ain’t got nothing on this one, where the virus has basically taken human form. I’d like to say it’s been a while since we saw anything new from the zombie genre, but that’s not true — South Korea’s zombie series Kingdom is also excellent. It’s nice, nevertheless, to see something else that livens up the genre.


← No Big Deal, Just a Dog Sitting at a Bar Watching '101 Dalmatians' on the Bar TV | From Gigi and Zayn to Grimes and Elon Musk: A Brief List of Celebrity Lockdown Babies →