Review, with Spoilers: The Deeply Anticlimactic ‘Evil Eye’ is Not Scary, Mysterious, or Thrilling—Blumhouse Lied to Us!

We are living in a time where words don’t seem to mean anything anymore, so maybe that is why Evil Eye, a movie of staggering inactivity and deeply dissatisfying anticlimax, is being marketed as a “horror, mystery, thriller.” This movie is none of those things. It is not spooky. It is not scary. It is not tense. It is not unnerving. It is not satisfying! I do not quite understand how Evil Eye managed to do it, but this film put Sarita Choudhury and Sunita Mani in a room together and I could barely stop myself from dozing off. It is not good.

A Blumhouse production (which you could very well compare thematically to Blumhouse’s 2020 version of The Invisible Man, entirely in that film’s favor), Evil Eye is a cinematic adaptation of Madhuri Shekar’s acclaimed same-named audio play. The play was written for Amazon’s Audible service (which is also probably why the film is premiering on Prime Video and is part of Amazon’s partnership with Blumhouse), and Shekar adapts her own work for the screenplay. The result is a script that has some very recognizable daughter/mother and wife/husband relationships, especially for viewers of South Asian, Middle Eastern, or East Asian descent, and the connections feel authentic. But the movie that is shaped around those familial links is deeply underwhelming, utterly devoid of conflict, and feels curiously lacking in cultural context. On the one hand, Evil Eye is a representation win! The entirety of this cast is brown people! But on the other hand, watching Evil Eye reminded me a bit of The Lovebirds, which also felt lacking in specific cultural context and character development for its POC leads. The Lovebirds got away with that because of Kumail Nanjiani and Issa Rae, whose charismatic performances elevated that comedy’s material. There’s no such luck for Evil Eye, which relies on superstition and the supernatural for its plot but barely skims the surface of either concept.

I am not saying the movie doesn’t center Indian and Indian-American experiences; it does, although you might feel like you’re watching another episode of Indian Matchmaking, since the movie’s main descriptor of these cultures in Evil Eye is “parents are obsessed with marriage.” My point, rather, is that the evil eye has become so co-opted in the Western world by the likes of big brands like World Market and Anthropologie that it has lost some of its original cultural relevance, and Evil Eye doesn’t bother to go into it, even though the goddamn movie is named Evil Eye. Forgive me, but my home is covered with Iranian cheshm nazar, I have a bunch of evil eye jewelry, I am weirdly superstitious about this one thing. (I do not want LooLoo Khorkhoreh hanging around my spot!) And given all that, honestly, Evil Eye just made me mad. There were NO DJINNS and GODDAMMIT, I WANTED DJINNS.

Anyway, let’s get right into spoilers, because there’s not much to talk about with Evil Eye. This isn’t going to take very long.

SPOILERS AHEAD FOR EVIL EYE

The film follows mother Usha (Choudhury, whom you should just watch in Mira Nair’s Mississippi Masala opposite Denzel Washington instead) and daughter Pallavi (Mani, whom you should just watch in Save Yourselves! instead). Although Usha and her husband, Pallavi’s father Krishnan (Bernard White, whom you might recognize from Silicon Valley) live in Delhi, India, Usha chats every day with 29-year-old Pallavi, who lives in New Orleans as a college instructor, I think? I’m not sure! She complains about babysitting undergrads and being unable to use her writing degree, so I assume she is an adjunct. My endless sympathies.

As Pallavi has gotten older, Usha’s desperation for her daughter to get married has gotten more pronounced. Convinced that Pallavi was cursed while still in Usha’s womb, Usha adorns her home with evil eye decor, wears a special necklace with an evil eye on it, and gave Pallavi a bracelet with a similar charm years before. “If you’re not careful, bad things could happen,” she tells her daughter, but her reasoning is opaque, and the explanation for her paranoia nonexistent. When Pallavi starts dating the handsome and rich Sandeep (Omar Maskati), who reminds Usha a little too much of an abusive ex-boyfriend, their mother/daughter relationship is further strained.

What does Usha have against Sandeep? She knows that people already snicker behind her back for all the evil eye stuff, and mental health issues are alluded to by her bristling response to being called “crazy.” But Usha is convinced that something is off with Sandeep. He gives expensive gifts too soon. He offers to pay $1,000 each month so that Pallavi can live in a better neighborhood. He encourages her to quit her job so she can work on her novel. Pallavi feels supported, but any viewer paying attention could see that these might very well be the first steps to a controlling, potentially abusive relationship. Usha’s friends encourage her to let Pallavi and Sandeep get married because he’s hella rich, and a wedding astrologer assures Usha they’re a perfect match, but still she resists. And finally, Usha realizes who Sandeep reminds her of: her domineering college boyfriend, who never got over their breakup, stalked Usha after she married Pallavi’s father, and attempted to murder her. 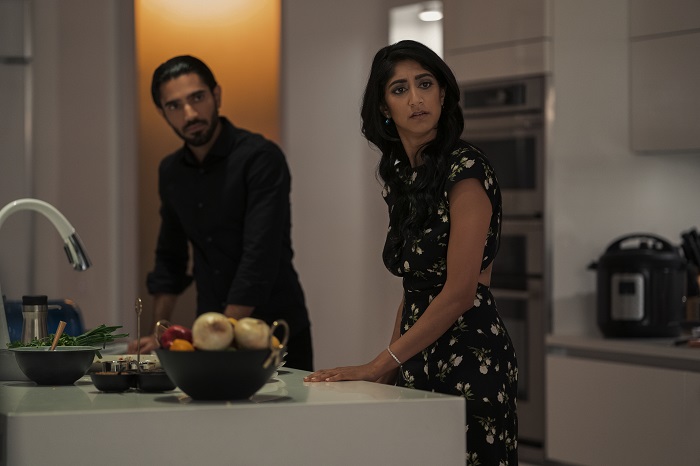 Usha is convinced that Sandeep is her ex, reincarnated. Krishnan is convinced that his wife is losing her mind, and Pallavi isn’t far behind. And then … yeah, and then nothing. I mean, something, because yeah, Sandeep ends being the bad guy reincarnated. He threatens Usha. He’s sleeping with Pallavi. There’s no explanation given for how he cursed Usha, or how he was reincarnated, or why he keeps getting reincarnated as a brown baby (spoiler alert!), or whether there’s a portion of another soul in Sandeep that was surprised when this reincarnated spirit was activated upon hearing Usha’s voice, or like … anything. There’s nothing. Usha and Sandeep have a few awkward, then some threatening, phone calls. Pallavi doesn’t believe her mother. There’s a fight at the end of the movie, where Usha is trying to use some Law and Order Jack McCoy schemes to trick Sandeep into a confession, and he decides to just kill mother and daughter instead, and then they fight back, and then at the hospital, Usha tries to set Pallavi up with a hot Indian doctor. It was 90 minutes, and felt like forever!

Directors Rajeev and Elan Dassani, in the press materials for Evil Eye, praise the opportunity to work on a “psychological horror,” and I’m sorry, but were they talking about another movie? Because there is no tension to a movie where you know within the first 15 minutes or so what the big narrative reveal is, and then there’s nothing else that reverberates outward from that. Pallavi and Krishnan may doubt Usha, but the film never does, which doesn’t leave open any opportunities for real, palpable anxiety or doubt. And for viewers, too, there’s no journey of discovery here. Usha identifies Sandeep as the bad guy, he’s confirmed as the bad guy, but somehow there is still a feature-length film. I’m not sure what else to tell you; it is a marvel of the space-time continuum.

Sorry to bring up The Invisible Man again, but director Leigh Whannell used an array of cinematographic techniques to ratchet up that film’s pervasive sense of dread—remember the very long pans that made your skin crawl as you kept looking for the bad guy, until you recreated the Leo-pointing meme from Once Upon a Time … in Hollywood once you finally spotted one? That was great! The Invisible Man was also a film about gaslighting and domestic abuse, but the film trusted its audience more to imagine the horrors that occurred in Adrian Griffin’s mansion. The flashbacks provided in Evil Eye to further contextualize what Usha went through almost give too much information, and are inserted into moments in the story that come off as contrived. A knock on the door reminds Usha of, well, that evil ex knocking on the door. Someone grabs her hand; she remembers him doing so, too. It’s all very literal, but also weirdly unimpactful, and not at all scary, or even slightly off-putting.

Instead, the scariest part of Evil Eye might be when Pallavi, nearing 30, admits she doesn’t know how to make chai. Or, when Krishnan attends an engagement party, and a family friend’s wife doesn’t let her husband eat any gulab jamun because it’s not his cheat day. Those are horrors. The rest of this film is just inertia, and also surprisingly conservative—first-gen adult kids can make decisions of their own, you know, without accidentally sleeping for months with their mother’s murderous and reincarnated ex-boyfriend! There are levels to this, and that is too high level! Evil Eye is one of the most disappointing movies I’ve seen this year.

Evil Eye is streaming on Prime Video as of October 13.