Review: You’ve Seen ‘The Lovebirds’ Countless Times Before, and I’m Not Quite Sure That Issa Rae and Kumail Nanjiani Actually Save It

The refreshingly unique thing about The Lovebirds is that it is a romantic comedy starring two people of color, and that is possibly the only unique thing about The Lovebirds. Other than the primary casting of Issa Rae and Kumail Nanjiani, I’m not sure what else is spectacular, or even particularly interesting, about The Lovebirds. The plot is basically just a reconfigured Date Night. There’s a hole in the script where a villain should be. The “jokes” here are mostly allusions to pop culture, the kind of references that will make you chuckle in recognition rather than genuinely laugh. I’ll take The Lovebirds as the representation progress it is, but I wish there was more to this than Rae’s and Nanjiani’s considerable—but not wholly redemptive—charm. 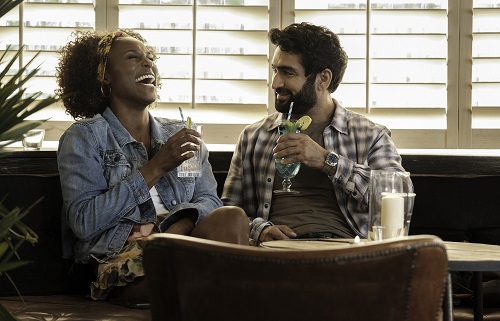 One of the first films to transition from a traditional theater release to a streaming option when the coronavirus pandemic began escalating, The Lovebirds begins in an idyllic way: The morning after a night spent together, Jibran (Nanjiani, reteaming with director Michael Showalter after The Big Sick) and Leilani (Rae, starring in her second New Orleans-located film this year, following The Photograph) are all delirious smiles and lusty glances. They don’t know each other’s last names, but they fall hard, day-drinking in a park, blowing off plans with other people to spend more time with each other, and making out at lunch. “You are unbelievable,” Jibran gushes to Leilani, but then fast-forward to four years later, when his “You are literally unbelievable” has a lot more stank on it.

But that’s before they accidentally hit a bicyclist with their car, and before a man claiming to be a cop (Paul Sparks, of Thoroughbreds) commandeers their vehicle to chase him. The guy is a criminal, the mysterious man insists, but instead of apprehending him, he hits him again. Then runs him over. Then runs him over again. And when he flashes and a gun and disappears, Leilani and Jibran are left with the dead man’s cellphone, a mysterious address, and a frantic concern that they’re going to be charged with murder. Desperate to find answers and clear their names—and a little jazzed up from all that Amazing Race talk—they decide to traipse around New Orleans for the truth.

What that means, in a very Game Night fashion, is that Jibran and Leilani are forced to work together to stay alive, with all their relationship issues bubbling to the surface. While being tortured, they try to one-up each other about who will have a harder time dating again now that they’re broken up. Stuck in a Lyft Share with a handsy couple in the beginnings of their relationship, they yell at them for being so public with their happiness. They struggle to act like “normal people” when pursuing other people involved in this conspiracy, and continue their endless stream of arguing—about whether the term is “catwalk” or “fire escape”; “ice pick” or “heel”; etc. etc. etc.—in every situation. Every so often the movie remembers that these people loved each other once, and there’s a softened glance shared or some flicker of sexual tension, but then it’s right back to the same tired rhythm as before. 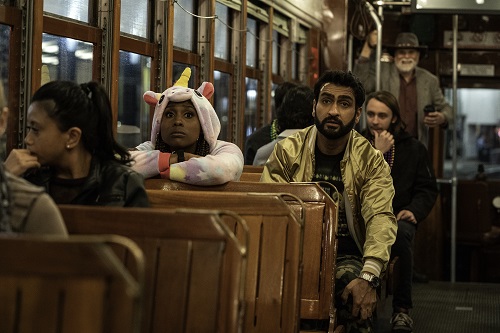 Rae and Nanjiani are individually charming, but man, does this film squander that goodwill by just having them yell a lot. Too much! The script from Aaron Abrams and Brendan Gall basically equates humor with hysteria, but most of their jokes are just references to other things—Hobbs & Shaw, Katy Perry. The only ongoing gag the film offers is an awareness of its main duo’s ethnicities, so there’s a white hipster woman calling the police on Leilani and Jibran who describes them as “She happens to be African American, and he just happens to be a person of color as well.” Later on, Leilani mocks Jibran’s desire to turn themselves into the police with “Brown man, you sound crazy. Look at your murderous beard and your murderous brow!”, and finally, when the duo is on the run and a police car drives slowly by, they freak out before realizing “Oh, he’s just a regular racist.” Those moments work because they speak to a certain shared tension between Leilani and Jibran as people of color, but they also highlight how little else we know about these characters. Four years into a relationship, you probably share some goals! You might know each other’s families! What kind of stuff do you have in common? The movie’s script goes so hard on the “fighting as inherently funny” approach that it leaves room for little else.

Showalter’s direction is adequate but not particularly interesting—the only shot composition that sticks out in my mind is clever framing during a scene when Leilani and Jibran interrogate someone in the foreground (I appreciated the commitment with which they ask the guy they’re slapping around, “Is environmentalism weird, or is it absolutely necessary?”) while a fight they can’t hear breaks out in the background—and in fact feels particularly phoned-in during what should be one of the movie’s most climactic scenes in a shadowy, Kubrickian mansion. There’s no zing to this, which isn’t to say that these sequences needed to be flashier, but that they’re mostly curiously lacking in dramatic effect. The movie is just shy of 90 minutes, but still feels flabby. Nanjiani and Rae are charismatic performers who try their hardest to inject some energy into all this, but overall, The Lovebirds is, despite a few amusing moments, disappointingly derivative.

The Lovebirds began streaming on Netflix on May 22.

And, here’s another thing: There’s a scene late in the film that makes clear some of the script’s lack of impact. About a third of the way through The Lovebirds, when Leilani and Jibran are kidnapped, they realize that they’ve become entangled in a blackmail scheme targeting politicians and higher-up elites in New Orleans and throughout Louisiana. These people are members of some Eyes Wide Shut-like group sex organization, and someone is blackmailing them with pictures of the parties. And I don’t say “cult” here because once Leilani and Jibran crash their party, everyone there seems totally fine with it? There’s no sex slavery, like in the Kubrick film or in the second season of True Detective. It’s just a bunch of people wearing plague doctor masks and then getting it on in a gigantic bed onstage when their numbers are called. It’s not my thing, but it’s apparently someone’s thing! And no one seems forced into it! What’s the problem? It’s an obvious development when cops raid the place, but then weird when a detective tells Jibran and Leilani that “we’ve been tracking them for months, and the raid tonight was supposed to shut them down for good.” … Okay, but shut down WHAT? There’s no criminal element at play here! In fact, the detective even nods along with Leilani when she praises how much the people on the bed were putting in work! And that’s part of what makes The Lovebirds feel so peculiarly without stakes. Who cares if these rich people are just having sex with each other with weird robes on? That is the grand mystery here? Whatever, man! Don’t yuck their yum, okay?