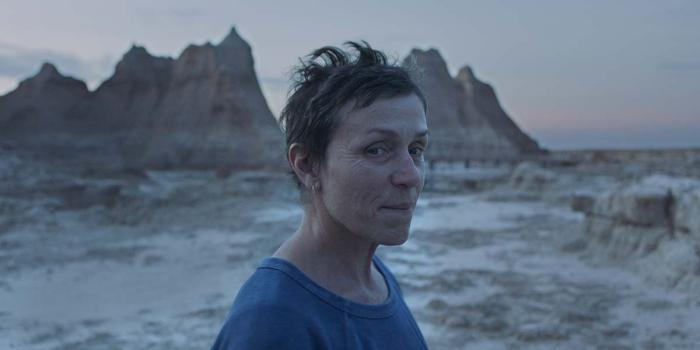 Following TIFF, What Does Oscar Season Look Like During a Pandemic?

The Toronto International Film Festival wrapped up in a muted manner this year, a befitting mood given the generally quieter nature of the event following COVID-19 lockdowns and the pivot to online video for audiences and critics alike. It’s a marked contrast from the usual excitement of the festival. There are few things as thrilling, exhausting, and all-consuming as covering a film festival as a member of the press, believe me. No amount of free coffee from the break room can make it any less frenetic. So, for those of us who did get accredited for TIFF (and that number was controversially much smaller than expected, which resulted in the shut-out of a lot of talented writers) had a somewhat surreal experience this season.

TIFF is one of the major fall festivals, alongside Venice, Telluride, New York, and London. What differentiates it from those other events, which are similarly glitzy and extensively documented, is its notion of awards prestige. To have your movie premiere in Toronto is to prepare it as a worldwide For Your Consideration advert. TIFF’s People’s Choice Award, the only major award of the festival season voted on by general audiences, has become a starting gun of sorts for the Oscar race. Of the past decade of winners, nine of them went on to receive a Best Picture nomination. Last year, movies like Joker, Jojo Rabbit, Parasite, Marriage Story, and Knives Out dominated festival chatter and came to wholly define the awards season that followed. We simply expect this from Toronto, as much as we do endless orders of Tim Horton’s and hunts for reliable Wi-Fi.

So, what happens when both TIFF and the festival season at large must deal with a literal pandemic? TIFF went digital this year, as did New York (although both also held drive-in screenings), Telluride was canceled altogether, and Venice kept on trucking, albeit with reduced capacity theaters and red carpets full of PPE. Many movies that critics were expecting to play this season are absent, with some of them off the 2020 release slate completely. King Richard, for example, went from being a much-anticipated power player of the year — an intense biopic starring Will Smith as the father of Venus and Serena Williams, slated for a cushy November release — to seeing its premiere date delayed by an entire year. Many films we had penciled in for late 2020 releases never got to finish shooting due to the lockdown. So, as a result, TIFF was not only quieter but far less America-centric. The major studios mostly sat it out and the few major movies on the slate were essentially shared by all the festivals. Hollywood seemed out of the picture for once.

That’s not to say that TIFF was bereft of Oscar conversations or baity headlines about a movie’s inevitable awards success. Even with a greatly reduced slate of titles, there was more than enough to have some critics filling out their prediction cards. Nomadland, directed by Chloe Zhao and starring Frances McDormand, opened to rapturous reviews at TIFF and won the top prize at the Venice Film Festival, a strong indication of future Academy success (remember, it was winning the Golden Lion at Venice last year that helped to cement the status of Joker as a legitimate contender, for better or worse.) Francis Lee’s romantic drama Ammonite received strong write-ups too, particularly for its stars, Saoirse Ronan and Kate Winslet. The latter won the TIFF Tribute Award for Best Actress, a prize that the festival introduced last year that seemed to exist mostly as a way to be a definitive part of the awards cycle. The winner of the Best Actor prize was Anthony Hopkins, who earned some of the best reviews of his long and illustrious career for The Father, wherein plays a man suffering from Alzheimer’s. Even Marky Mark Wahlberg got in on the action with Good Joe Bell. In purely Oscar-adjacent terms, TIFF was not the barren wasteland some were expecting it to be.

The big winner of this reduced season so far is Nomadland, which became the first film in history to win both the Golden Lion and the TIFF Audience Award. The Searchlight drama is now at the front of the race, which could result in Zhao becoming the first woman of color nominated for Best Director and McDormand the only living woman with three Best Actress Oscars. Searchlight, which is famed for its awards season prowess, had a lot of big hitters this year that they chose to push back, including Wes Anderson’s The French Dispatch, Taika Waititi’s Next Goal Wins, and the biopic The Eyes of Tammy Faye. It’s a curious ‘what if?’ to imagine the alternate awards season where these movies are given the bigger push than the quiet indie drama with less mainstream marketability. Indeed, a quieter Oscar race could benefit Nomadland in a way that it wouldn’t have been able to achieve otherwise.

This awards season offers a lot of fascinating opportunities for the Academy to take risks and choose those oft-overlooked niche titles that are usually dismissed by middlebrow, mainstream-oriented voters. Think of works like First Cow, Never Rarely Sometimes Always, or Bacurau, all of which are wholly deserving of the awards glow but would never be predicted as Oscar choices. Of course, the Academy are the safest pair of hands in town, often to their detriment (hello, Green Book), so asking them to think outside the box, even during a pandemic, might be too lofty a request.

Despite sitting out festival season, Netflix still managed to dominate the conversation. The streaming service put down a hefty $20 million for Bruised, the directorial debut of Halle Berry, then quickly snapped up the intensely bleak drama Pieces of a Woman, which netted Vanessa Kirby the Best Actress prize at Venice. The presence of Netflix in festivals like TIFF has been a topic of contention for many industry figures, but the current kings of streaming have been more openly welcomed into the fray at Toronto and Venice than they were at Cannes (although that festival’s rejection of streaming-exclusive movies was as much an issue of French law as it was one of old-school snobbery.) Their inclusion on the festival circuit over the past couple of years, with movies like Roma, The Irishman, and Marriage Story earning them raves, has been a combination of hustling for the acceptance of cynical figures in the business and an industry-wide victory lap. See, they can play with the big boys just like everyone else. Of course, in a year where theaters are in the dust and even the Academy has acquiesced to change, there’s no need to submit Netflix films for festival premieres when we’re all at home anyway.

In that aspect, Netflix is way ahead of the competition, and they certainly have an enviable slate of possible power-players for the Academy’s consideration: Spike Lee’s tremendous war drama Da 5 Bloods; Charlie Kaufman’s existential mind-twister I’m Thinking of Ending Things, Ryan Murphy’s adaptations of the groundbreaking play The Boys in the Band and the Tony-nominated musical The Prom; Aaron Sorkin’s all-star historical drama The Trial of the Chicago 7; Mank, a Hollywood drama by David Fincher; Ma Rainey’s Black Bottom, the last film by the late great Chadwick Boseman; and Hillbilly Elegy, to name but a few. Really, no other studio, even the reliable Oscar players like Searchlight or Focus, can compete in terms of sheer hype.

The Academy has pushed back the 2021 Oscars by two months, and the eligibility period for feature films was extended through to February 28 (it typically ends on December 31.) AMPAS has made a variety of concessions to compensate for the chaos of COVID, including an expansion of eligible screening areas as well as films that premiered online rather than exclusively theatrical releases. It remains to be seen if any studios will take a chance and drop their prized titles between now and February of next year to qualify for the current race. Is it financially feasible to do so? The Oscars don’t guarantee major box office dividends like they used to, but they still carry sizeable economic clout, something that matters more than ever for mid-budget adult-focused films (or basically anything that isn’t a Disney blockbuster.) Much has been written about the supposed death of the mid-budget film, and those fears have been exacerbated by the current economic panic. Even if the Oscars go forward in April 2021 (and frankly, that seems like a pipedream now), the market is forever changed, as are the stakes. It’s about so much more than winning a little gold man.

← 'Legends of Tomorrow's Caity Lotz Loves Trump Supporters and Thinks You Should, Too | QAnon: 8Chan Owner Jim Watkins Is Likely Q, or Knows Who Q Is →