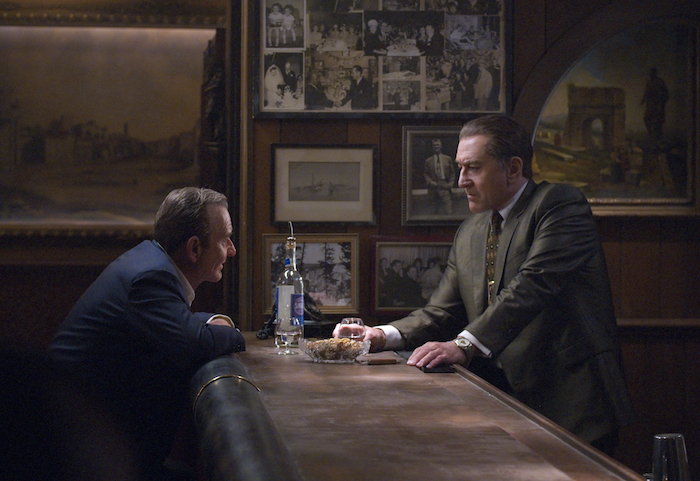 Review: Scorsese's 'The Irishman' is a Blast from the Past and a Glimpse of the Future

There is a fine line between consistency and repetitiveness. For more than 50 years, Martin Scorsese has stayed on the right side of it, and The Irishman is the ultimate case in point. An epic New York-set gangster tale served with a hearty dollop of Catholic imagery, it’s as on-brand a film as has ever been made, but Scorsese demonstrates a remarkable knack for being pleasantly consistent without repeating himself.

Of the hugely influential generation of filmmakers sometimes called “New Hollywood,” who now might perhaps more accurately be referred to as the Old Guard, Scorsese is one of the few—arguably the only— who continues to consistently produce works on par with those that made his name. Looking at The Irishman, perhaps the key is the way he balances a healthy appreciation for the new—the CGI “youthification” that returns Robert De Niro, Al Pacino, and Joe Pesci to middle age for much of the film—and a love of the old, shooting on 35 mm whenever possible. In an industry where many of the biggest names either staunchly champion the latest digital advancements or cling to the old ways for dear life, Scorsese holds onto the past with one hand and reaches towards the future with the other, and that makes all the difference. In recounting the decades-spanning criminal career of Frank “The Irishman” Sheeran (Robert De Niro), Scorsese’s latest film is the sort of personal epic I’ve heard more than a few movie lovers lament simply isn’t being made anymore, from its 3.5 hour runtime to its decades-spanning narrative, told in a way made possible through the latest VFX developments.

While The Irishman’s all-star cast is one of its main talking points, the de-aging process that made it possible also presents not something worth decrying as a bona fide weakness, but what might much more accurately be deemed a necessary evil. Particularly with De Niro, there are some moments that just don’t quite work, where anyone thrown off by the CGI resurrection of Peter Cushing in Rogue One will feel similarly ill at ease. While the technique has advanced considerably over the past decade, we’re not quite out of the uncanny valley just yet. Ironically, it is those moments that usually sell us on a character’s humanity—close-ups, those quiet scenes where it’s all about expressions, ticks, a look in the eyes—where this otherwise remarkable technique can’t quite stick the landing. It’s not enough to truly distract from everything that makes the film great, but it’s enough to wonder, at least for a moment or two, about another world where star power is a little less crucial and the equivalent of this film is made with actors who are actually middle-aged.

That said, the cast, technical quibbles aside, is phenomenal. De Niro and Joe Pesci as mafioso Russell Bufalino are both brilliant, but the true standout is Al Pacino as legendary labor union leader Jimmy Hoffa. Pacino manages to capture the larger-than-life grandeur of Hoffa at his height without ever making him feel false—always a character, never a caricature. While Hoffa is ultimately at the center of the film’s main dramatic arc, through the wonders of Pacino’s performance he’s also excellent comedic relief through most of the film via impeccable timing and truly inspired delivery; the way in which Pacino at one point petulantly delivers the line “they killed him!” will, I am quite certain, be burned into my brain until my dying day.

While Steven Zaillian’s script is solid work, the thing that really keeps the film’s epic runtime flying by is Thelma Schoonmaker’s editing, which brings a playful vivacity to what could have otherwise been a somewhat too familiar “gangster reflects” storyline. At the New York Film Festival press screening of The Irishman, Schoonmaker’s name in the credits got as loud an ovation as Scorsese and the stars, and with good reason.

Thematically, The Irishman is actually a deeply somber film. There’s a poignant focus on aging in the way the whole story is framed as Sheeran recounting his life, not quite on death’s doorstep, but clearly walking up death’s driveway. As he narrates portions of the film in voice-over, there are pauses that at first feel somewhat careless, like De Niro taking a second to recall the rest of his line, but by the end rings utterly genuine to the realities of an elderly man telling a story. Overall, it’s a film that feels evidently and profoundly the product of a creative team in their ’70s. On one hand, it’s the reason all that pesky de-aging is necessary. On the other, it feels like if The Irishman had been spearheaded by a middle-aged team taking the typical makeup and prosthetics based “age up” approach to such a story, they would not have been able to tell it in quite the same way, which presents yet another reason to grin and bear the occasional detour into the uncanny valley.

At once fresh and pleasantly familiar, innovative and nostalgic, watching The Irishman feels like meeting an old friend for the first time — the sort of delightful impossibility that can only be crafted by a true magician. After all this time, Scorsese’s still got it, and it’s a joy to behold.

← Who Owns Dead Celebrities? | Ten Things You Never Knew About The Wiggles →