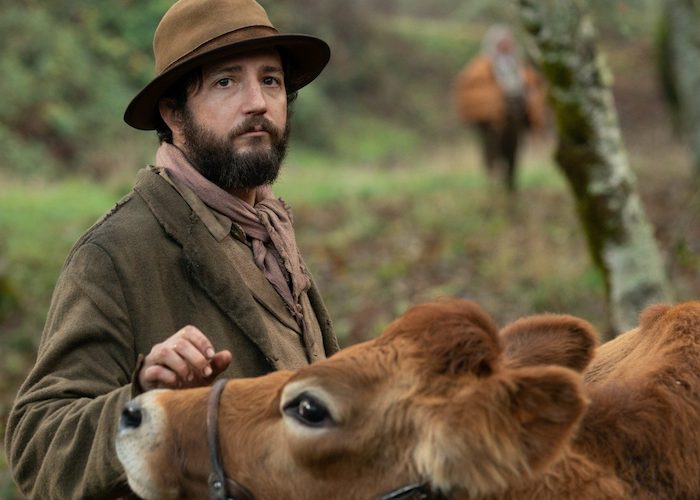 Review: 'First Cow' Crafts a Greed Parable as Wholesome as a Glass of Milk

Imagine a frontier. Doesn’t really matter if it’s the western frontier of the 19th century or space (the final frontier), if I tell you a movie takes place on the frontier, certain tropes and characters will probably come to mind, including a rather particular kind of hero—gruff, machismo, emotionally constipated. Y’know, John Wayne.

And then there’s Kelly Reichardt’s First Cow. The past several years have offered several entries in a new breed of revisionist Western — John Maclean’s Slow West, the Zellner brothers’ Damsel — but none have so fundamentally inverted the traditional tropes while keeping certain traditional Western themes close to heart in quite the way Reichardt’s latest film does.

John Magaro as “Cookie” Figowitz is unlike any Western hero you’ve ever seen. So nicknamed by merit of being a cook, Cookie is an unabashed gentle soul, the sort of paragon of domestic virtues that cleans the house when asked to make himself at home. His dream in life is to save up enough to open a bakery, preferably somewhere a little more populated than the Oregonian frontier, and make people happy with delicious baked goods. Much like his namesake, Cookie is sweet, pretty soft, and probably would crumble under pressure. Not the guy you want with you in a shoot-out. Definitely the guy you want around afterward to give you the best tips for how to scrub bloodstains out of your floorboards.

The heart of the story takes a while to reveal itself, but it’s a pleasant meander of a stroll. First Cow is the sort of film that commits to showing instead of telling and understands that sometimes that means taking a while to get to a point—to develop a friendship, build a world, reveal a character trait. “You can’t just grow a tree, it takes time,” a character advises at one point, and you can’t help but feel that these words are Reichardt directly addressing her audience.

Ultimately, the premise proves simple in an elegant, almost fairytale-like way. A wealthy British expat (Toby Jones) imports the territory’s first cow. Cookie wistfully comments about all of the tasty treats he would be able to bake if he had milk to work with to his enigmatic friend, King-Lu (Orion Lee), who counters with a dangerous proposal — why not just take some? It’s not like he would even notice a cup of milk a day missing, would he? And after all, it’s not like they’ll keep up their scheme forever — just long enough to save up enough to go somewhere nice like California and open up an inn. So Cookie and King-Lu sneak out in the middle of the night to milk the rich man’s cow in secret in order to make tasty hotcakes with it — wares that, unsurprisingly, sell like proverbial hotcakes at the local market.

It’s a “still waters run deep” sort of story, the kind that lets tension hide underneath a tranquil surface. What a blissfully tranquil surface it so often is. First Cow luxuriates in quiet, wholesome moments in ways that traditional Hollywood storytelling “wisdom” would consider a terrible idea — only in actual fact, it’s absolutely mesmerizing. There are multiple scenes of a soft-spoken man making polite and utterly earnest conversation with a friendly bovine and most of the drama revolves around baked goods.

Do you know where else you get that kind of screen content nowadays? Abso-f*cking-lutely nowhere, except maybe an ad weaponizing those warm fuzzy feelings to con you out of your money. Or convince you that Facebook isn’t evil. (Well, I guess there is The Great British Bake Off…) But I digress.

Getting back to the point, First Cow’s unexpected wholesomeness is as refreshing as a sea breeze, cozy like old slippers, and exactly the sort of content I want tattooed right on my eyeballs in these trying times. That’s not to say it’s a happy film. Quite like frontier life, it’s properly bleak and dismal — but in a soothing, nourishing kind of way. Depressant-laced chicken soup for the soul. Maybe I’m a glutton for punishment, but I’d definitely go back for seconds.

← Humans Are the Noisy, Dirty, Violent Neighbours of the Planet | Review: Charlize Theron's 'The Old Guard' Is Superb, Surprising, And Subversive →