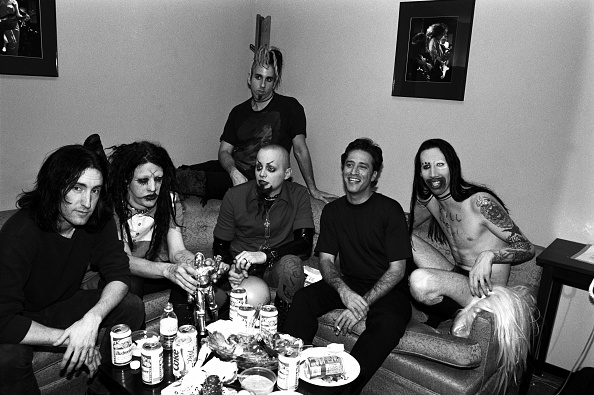 I read a few pieces from the Google archives as research for this post, and now I feel like I’ve crawled out of a very grimy hole that leads all the way back to the ’90s, where I’d forgotten that Trent Reznor — frontman for Nine Inch Nails and the guy who more recently scored Disney/Pixar’s Soul — and Marilyn Manson were inextricably linked. Reznor was Manson’s mentor and produced his first three albums (the only successful ones, really).

In the wake of multiple sexual abuse allegations being leveled at Marilyn Manson by Evan Rachel Wood and other former partners, Trent Reznor wants to remind everyone that he and Manson are not friends, and they have been estranged for 25 years. Reznor released a statement saying as much:

I have been vocal over the years about my dislike of Manson as a person and cut ties with him nearly 25 years ago. As I said at the time, the passage from Manson’s memoir is a complete fabrication. I was infuriated and offended back when it came out and remain so today.

The statement was not unprompted. Reznor issued it after an anecdote from Manson’s book, The Long Hard Road Out Of Hell, resurfaced, detailing an incident in which Manson and Reznor assaulted a woman. For his part, Reznor denied the account when the book was released and has denied it whenever the topic has come up. For whatever it’s worth, Manson’s accounting of the incident has been inconsistent, to say the least, and always paints himself in the best possible light.

Likewise, Reznor’s dislike for Manson has been publicly consistent, as well. While Manson claimed in 2017 that the two made amends, Reznor has never confirmed as much, though he did at one point say that “drugs and alcohol” ruined Manson’s life and “he’s become a dopey clown.”

One person who has not yet spoken to Marilyn Manson’s past sexual abuse is Eli Roth — director of kids’ movies — who might want to distance himself from previous comments he made on Larry King’s show: “I shot a video with Marilyn Manson and Lana Del Ray. Marilyn Manson is the best, and he’s one of my favorite people. And the footage [depicting a rape] is so sick that it’s been locked in a vault for over a year.”

via The AV Club


← Today, the GOP Will Decide How Openly Racist It's Going to Be | Ted Cruz Red-Misted by Cary Elwes →