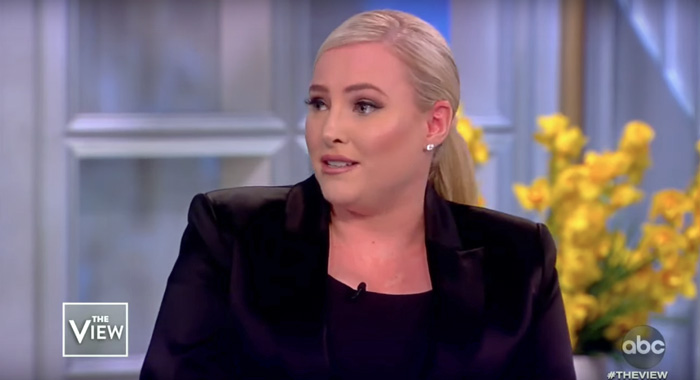 Meghan McCain Thought She Could Step to Elizabeth Warren, Guess How That Went

After a slow and predictable start to the New Year, Meghan McCain was in full force on Tuesday and doing what she does best on The View: Getting ruthlessly dunked on by anyone and everyone who isn’t a beer heiress forged from the white privilege depths of John McCain’s balls. In this case, Senator Elizabeth Warren continued the proud tradition of Democratic candidates joining the panel and effortlessly giving Meghan the Super Nanny treatment like the belligerent toddler she is. Seriously, one of these times, someone’s going to give her a jar of Hellman’s and tell her to eat quietly on the stairs until she can talk like a big girl. (Phrasing?)

Like I mentioned earlier, Meghan returned from the holiday break fully prepared to support assassination of Iranian general Qassim Suleimani because her turn-ons include Paul Ryan, sucking Jell-O shots out of an AR-15, and bombing innocent brown people just like her dear ol’ dad’s favorite song. Also, she’s a dyed-in-the-wool modern Republican, which requires being a xenophobic, Christofascist, goose-stepping Granny-starver who thinks making the Left look “soft” on terrorism is an epic own for the ages. (It’s not and never will be.) Fortunately, Senator Warren is a noted educator, so she can probably shut down obnoxious shitgibbons in her sleep.

On that note, here’s Meghan trying to force Warren to say that Suleimani is a terrorist as if that’s the main source of contention here, and not the fact that Donald Trump is committing acts of war with the same reckless abandon that delivers quarter pounders into his rectum-shaped mouth.

If you can’t watch the clip, in a nutshell, Warren makes a clear and effective case for why Trump instigating a war with Iran is demonstrably butt-ass stupid while Meghan continues to sit there and go, “Ah ah ah, you didn’t say terrorist!” This blows up in her face because not only does Warren say the magic word, but she continues to hammer home the fact that it’s not an excuse to destabilize an entire region at the expense of Iranian and American lives. From there, it gets even sweeter as the good senator demonstrates her skill at completely tuning out spoiled tarts who have nothing of value to say. Meghan might as well have been a ghost at this point.

My vibe in #2020 is Elizabeth Warren finishing her thought through static interference. pic.twitter.com/KSWX7oEusG

But the dunks just kept on coming. Lindsey Graham’s blatant hypocrisy came up in the course of discussing impeachment, and if you haven’t had a chance to see the latest Rolling Stone profile on Graham’s complete acquiescence to a man who routinely pisses on John McCain’s grave, here’s a taste:

going to be thinking about this quote from steve schmidt about lindsey graham for awhile in this rolling stone piece by @markbinellihttps://t.co/uhM3nEjuaX pic.twitter.com/60lCI8P8Yr

In the course of that discussion, Meghan probably did the most revealing job ever in demonstrating that she’s a substance-less gargoyle who brings nothing to the table but saying whatever nonsense she can think of on the fly to defend the Republican Party no matter what. Especially in the case of Graham, who she literally tried to argue is actually a political mastermind by being the Renfield to Trump’s Extra-Rapey Dracula. In a remarkable move, Sunny Hostin was not here for it, and this is the closet anyone on The View has come to nailing Meghan to the wall with her own bullshit. Via Raw Story:

“I want to make this very clear in 2020,” McCain said. “I’m not here to talk about the ethics of it, I’m here to explain the politics of it, once again.”

“I didn’t realize that politics and ethics are two different things,” Hostin said.

“So Lindsey Graham has no ethics?” Hostin said.

“Well, shame on him because I thought he was sworn to follow the Constitution, and he is not doing that,” Hostin said, as the crowd applauded again.

“Again, I know that everyone wants me to come on here and rip his you-know-what open,” McCain said. “I can’t, I won’t. Stop asking me to do it.”

“I’m happy to do it,” Hostin replied. “He’s not following the Constitution.”

Well, that touched me in places I didn’t know existed, but if I can offer a suggestion: Do her husband’s piece of shit website next. It’s time.