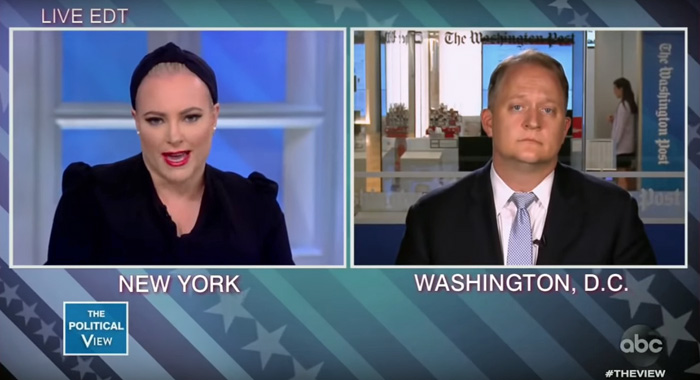 Imagine being a serious journalist who just worked on a story of such grave national importance that there are congressional meetings happening as we speak to determine whether or not the Department of Justice is engaged in a blatant coverup to protect the President of the United States from his own stupidity and corruption. Now, imagine being that same journalist and having John McCain’s petulant daughter vet your reporting on daytime TV, because that’s exactly what happened to Washington Post reporter Shane Harris who, for God knows what reason, stopped by The View to defend the whistleblower story that’s rightly dominating headlines and social media.

In fairness, three out of the four The View panelists asked Harris reasonable and informative questions including Abby Huntsman, who apparently chose not to bond with Meghan McCain this morning and form the white, Jell-O-brained Voltron known as MY FATHER McHUNT. This would be Meghan’s kill, and Meghan’s kill alone… (It wasn’t. Not even close.)

Despite making a habit of deeming herself one of Donald Trump’s “most vocal critics” even though she’s on board with practically everything he stands for — guns, banning abortion, locking kids in cages, you name it — Meghan opened her round of questioning by quoting Trump’s early morning Twitter rant where he literally asks, “is anybody dumb enough to believe that I would say something inappropriate with a foreign leader while on such a potentially ‘heavily populated’ call”? Obviously, the answer to that question is yes, lots of people believe you’re stupid enough to do that. Tons of them actually. Christ, half the country is amazed you don’t just pick up the phone and start blurting out nuclear codes. From there, Meghan remembered her Fox News training and started deflecting to Obama.

“We have heard presidents promise things to foreign leaders before,” McCain said, “like President (Barack) Obama was caught on a hot mic telling then-Russian president (Dmitry) Medvedev he would, quote, have more flexibility after the election. Can you tell viewers why there’s a difference between that and this?”

As Dustin noted earlier, and former FBI agent Asha Rangappa explains in a detailed thread, foreign policy discussions like Meghan’s Obama example are baked into this whole process. These types of conversations are expected because the president has a buttload of room to do whatever the hell he wants when it comes to foreign policy, so it’s extremely significant that Trump still managed to trip an alarm. We’re talking about a situation where it’s nearly impossible for the president to f*ck up, and yet he somehow pulled it off. It’s almost impressive.

With that tactic out the window, Meghan switched gears to “Fake News,” which she would know all about considering she’s married to the publisher of The Federalist who’s been caught for both plagiarism and accepting bribes to write favorable coverage of the Malaysian government. I wouldn’t trust the media with that guy in it either.

“Just last week CNN was slammed for erroneously reporting a thinly sourced story that they had to remove a spy from Russia that possibly could have endangered him,” she said. “Is there a rush to report on Trump because people want to pin things on him, and just because he does so many things that are, as you said, deeply unconventional for a U.S. president?”

You’ll be surprised to learn that Harris wasn’t DESTROYED by essentially being asked, “Hey, CNN sucks. Do you suck like them, too?” and he pointed out the obvious answer that the American public should probably know that the president is the subject of a credible whistleblower complaint that the DOJ is trying to bury. As for what the hell Meghan is trying to accomplish, who even knows? But, again, for someone who claims to loathe Donald Trump for all of the definitely shitty things he said about her dad, Meghan never seems to have a problem setting aside her sole personality trait and jumping on a grenade for the Republican Party.

← Review: 'The Goldfinch' Fails to be Anything at All | 'Etonian Catastrophe': A Brexit Rock Opera, Starring Boris Johnson →