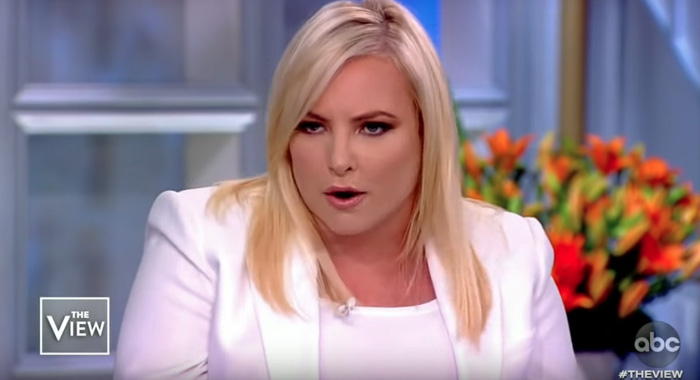 After a long, content-less eternity that felt as if God himself spit mayo in my face, The View returned Tuesday morning for its 23rd season. But despite Sunny Hostin’s alleged attempts to tell anybody and everybody that Meghan McCain is redneck hell on beer heiress wheels behind the scenes, John McCain’s Daughter© (a MY FATHER™ subsidiary) resumed her perch at the end of the table like a Dick Cheney gargoyle in a wig. And, folks, she was firing on all white cylinders.

Right out of the gate, Meghan came out hard to defend any and all guns including the AR-15, which was used just this weekend to shoot a baby in her face and left several dead or wounded during a mass shooting in Odessa. You see, Meghan has never been shy about her love of the second amendment and even stupidly bragged on live TV that her idea of marriage counseling is drinking Jack Daniels and shooting guns with her right-wing, plagiarist dickbag husband Ben Domenech, which is a spectacularly reckless thing to admit to, because even the most die-hard of gun nuts will call you an idiot for mixing guns and alcohol. So naturally Meghan doubled down by bragging about how she’s the only “chick” on the panel who spent her break playing Karen Rambo in Wyoming, presumably while pumped full of Jell-O shots. Again, this was her flex in the context of a mass shooting, and things only got more Meghan from there.

“This is a ground-level issue for me,” McCain said. “If you’re going to be a gun grabber, you don’t get my vote, period. We’ve got to have a different kind of conversation, which is what Beto O’Rourke, I interpret, and many other candidates to be.”

Co-host Joy Behar pointed out that a previous assault weapon ban signed by President Bill Clinton had reduced gun violence until it was lifted, but McCain argued that the military-style rifle used in the worst mass shootings had become too popular to ban.

“The AR-15 is by far the most popular gun in America, by far,” she said. “I was just in middle-of-nowhere Wyoming, (and) if you’re talking about taking people’s guns from them, there’s going to be a lot of violence.”

Jesus Christ, lady. Just so we’re all clear, that was Meghan McCain endorsing armed rebellion against the United States government over a f*cking recreational toy. If someone suggested we storm child concentration camps to rescue tortured children, I guarantee Meghan would be the first crowing about the sanctity of the law or some authoritarian shit. But when it comes to shooting pew-pew sticks? Welcome to DEFCON BUT DADDY I WANT IT.

Behar argued that those same gun owners had lived without AR-15 rifles for years, and McCain exploded.

“I’m not living without guns!” she said. “It’s just that simple.”

Wow, what an incredibly nuanced viewpoint that ABC News clearly couldn’t live without it. Who could’ve possibly guessed that Meghan’s stance on guns would be “I WANT THEM NOW”? What’s even more amazing is that her best friend and fellow conservative Abby Hunstman is back from maternity leave and actually tried to talk Meghan off this ledge. Keep in mind, that Meghan literally held one of Abby’s newborn twins before this exchange happened. The View made it a GIF and everything.

But how does Meghan respond when Abby makes a surprisingly reasonable request that she’d like to take the above newborn out in public without getting shot? With the traditional conservative response of “I got mine, f*ck you” of course.

Huntsman, however, responded to her close friend, wondering if they could live in an America where you could “walk in a mall and not be nervous that someone is going to pull out a shotgun.”

McCain asserted that she felt safe because she could protect herself because “I have guns at my house” before stopping herself short as she felt the audience wasn’t with her.

Who the hell says that to their best friend? “Not my fault your baby can’t shoot right.” If I were Abby Huntsman, they’d still be trying to lift the table up after I flipped it onto Meghan with my Hulked-out mom rage. “It was like watching a phone book drop on a bratty marshmallow,” the audience would tell people for years.

Here are the clips if you want to see Meghan literally use the phrase “virtue signaling” without a shred of irony, just in case you’re curious how much of her Federalist-publishing husband is rubbing off on her, which is a lot. Just buckets of it. This is all very good phrasing.

← Review: Amazon's 'Carnival Row' Is A Grim and Pointless Fairytale | 'Mindhunter,' the Atlanta Child Murders, and What Happened to Wayne Williams After His Arrest →