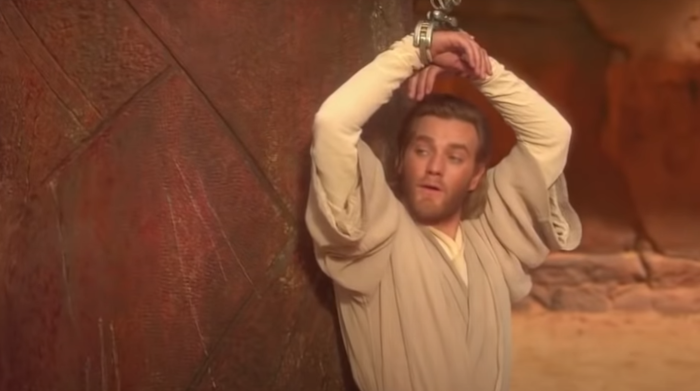 Absolutely brimming with clumsy dialogue, illogical plotting, poor character choices, odd pacing, and a plethora of strange Lucasian choices all around—I don’t think anyone could really claim that the Star Wars prequel movies are great cinema. Yet the trilogy, wildly reviled and mocked at the time, now seems to be undergoing a periodic sort of public reappraisal on social media. Some people take it too far, and claim that the movies were misunderstood masterpieces, which is obviously not true. Looking back on them now, though, they do provide an interesting sort of contrast for where the industry has gotten to nigh-on two decades later. Or at least where the big budget Hollywood end of that industry has ended up. It’s perhaps more of an indictment of what is, rather than a celebration of what was, that thinking about the prequels—and all their weird, mostly-failing-sometimes-semi-succeeding, idiosyncrasies—highlights just how boring and anodyne the modern tentpole moviescape has become, with the all-conquering MCU assembly line approach dramatically sanding down risk and out-of-the-box thinking. Maybe the best lens to look through at it all is the Disney one: The Lucas prequels were the last ones to be made before he sold the rights off to Disney, and they came out before Disney started ramping up its campaign to have control over every single item of creative media out there. If we wanna talk about individual flights of creator fancy being replaced by a filmmaking-by-corporate-focus-group approach—as messy and obviously not entirely accurate in all cases as it is—then ‘Disney’ does work as a fine enough demarcation. Because, I mean, The Last Jedi aside, it’s basically a case of a trilogy of interesting Lucasian failures transitioning to a series of bland, uninspired, sometimes competent, sometimes awful filmmaking-by-algorithm. That’s not to say the prequels were some bastions of heartfelt, searingly insightful cinema. No, for fu**’s sake. No. Two Days, One Night they ain’t. Just that contrasts are always interesting. Anyway, Twitter pondered the Star Wars prequels recently, when writer Scott Malthouse asked if people could say some genuinely nice things about the trilogy:

Say a genuinely nice thing about the Star Wars prequels

Even the director responsible for the best Star Wars film since the original trilogy chimed in:

Lucas made a gorgeous 7 hour long movie for children about how entitlement and fear of loss turns good people into fascists, and did it while spearheading nearly every technical sea change in modern filmmaking of the past 30 years.

1. Ewan McGregor put every ounce of his heart into it and that's amazing

2. The costume designs were awesome

3. as a political allegory it actually holds up

The scene at the "opera" where Palpatine speaks to Anakin about the Sith legend was hands-down the best acting of the entire saga, including the original trilogy and the sequels. Nothing else comes close. Palpatine's subtlety was stunning.

John Williams excelled himself in each one.

Duel of the Fates
Across the Stars
Battle of the Heroes

The Saber fight in Phantom Menace is probably the top one or two in all of Star Wars.

The Darth Maul light saber battle was probably the best in any of the Star Wars movies. The music, the dramatic set-up, the actual fight choreography. All of it were really, really good pic.twitter.com/hj88K5RxUV

Order 66 was genuinely sad. Pretty much the last half of RotS was actually good.

Ian Mcdairmid puts on an acting masterclass as Palpatine.

My take has always been the plot was mostly good and just awfully executed. The events leading to Anakin's turning are genuinely compelling and the transformation is believable. The way they chose to depict it all…is another story.

The darth Maul/Obiwan fight is genuinely great. Every strike is a real attack. They look like they’re fighting, not playing stage fencing.

The aesthetics of technology used are stunning, and well thought out. They clearly put a lot of thought into the presentation and tied it in well with the grungy 70s look of the original. We go from a sort of art deco 1920s futurism, to more utilitarian 1930s, to wartime 1940s.

Padme's costuming is some of the most iconic and gorgeous work

They laid the groundwork for Clone Wars and Rebels, which remain amongst my favourite media from the franchise.

Also, Ian McDiarmid and Ewan McGregor spent all of Revenge of the Sith chewing the scenery, and the world is better because they embraced the cheesy nature of it all.

They created an interesting narrative of the political backdrop of the universe, while also showing us the corruption it caused in a misguided Jedi order, through the perspective of a beloved villain and his pivotal role in the downfall of that order.

Phantom Menace had the best teaser poster of the saga, and one of the best movie posters ever for conveying a theme with visual precision and elegance. pic.twitter.com/cT9RAy0bNM

Great world building and design aesthetic’s. You can see a clear and logical evolution of design. Unlike the sequels which is just a rehash of old designs. pic.twitter.com/U6fETyOTiq

The wordless contrast between Qui-gon and Maul’s demeanor while waiting for those energy doors to open up was a masterpiece of character development. It told you all you needed to know about both of them in five seconds.

The sound effects of Jango Fett's "space mines" in Attack of the Clones were really impressive in the cinema.

1) Saber fight in Episode 1 is both beautiful and key to storyline.
2) Episode 3 is a legitimately good story.
3) Contains key missing ingredient from all other sci-fi: Legislative procedure.

The Phantom Menace is about technology - where filmmaking could go, not for fans of a brand, but for children, for their dreams and their cinema too.

It fails in normal things like pacing, tone, logic. But it's looking for something adventurous and new. It even finds some of it. pic.twitter.com/5O0w5X8r83

I think it did a good job in showing the rise of a totalitarian government, how religious fundamentalism and orthodoxy will inevitably lead to schism and pain, and showing that the Republic may have been "free" but was also sort of a capitalist/religious hellscape.

← The Decision of Social Media Networks to Crack Down on Trump Now Is Not a Coincidence | Gary Janetti, Meghan Markle, and the Weakness of the Satire Defense →