Gary Janetti, Meghan Markle, and the Weakness of the Satire Defense

Over the past few weeks, as the Black Lives Matter protests following George Floyd’s murder went worldwide, we’ve seen the various facts of our society react in ways that range from altruistic to laughably inept. The time for reckoning was long ago, but the sheer visibility of Floyd’s agonizing death at the hands of the police and widespread nature of the ensuing protests have forced a lot of white people to confront that which they have been ignoring for many years. In the entertainment business, the conversations have been especially revealing. The embarrassing number of beloved comedy shows of the past three decades scrambling to delete their own history of blackface is a painful reminder of how white supremacy was not only the default mode but the profitable investment in film, television, and beyond.

In the world of royal watchers, similar moments of forced penitence took place, particularly regarding the ceaseless racism, misogyny, and xenophobia directed at Meghan Markle. Elizabeth Holmes (not that one), a popular royal fashion commentator who has a book release coming soon, issued an extensive Instagram apology for how she ‘contributed to the harmful narrative of her as an “outsider”.’ Holmes also promised extensive changes to the way she covers royal issues in the future. She’s somewhat unique in this regard since coverage of Meghan in Britain remains loudly negative and as toxic as ever. A key difference between Holmes and, say, Dan Wootton or Piers Morgan, is that Holmes, like many Americans, molded a career from American-centric royal coverage while it remains just another cog in the machine of tabloid journalism and the attached job description. Holmes is not unique in this regard, and, I would argue, she is nowhere near the most vitriolic or openly racist when discussing Meghan. That brings me to Gary Janetti.

Janetti is a long-time TV writer and executive whose most famous projects include Family Guy, Will and Grace, and Vicious. Nowadays, he doesn’t seem to write for television so much, but he’s still active on social media and released a book in 2019 and became a New York Times best seller. A few years ago, Janetti decided to dedicate his Instagram page, which currently has over 965,000 followers, to embodying the ‘voice’ of Prince George, the oldest child of the Duke and Duchess of Cambridge, for the purposes of satire. His take on a literal child as a bitchy fashionista who hates women and swears a lot became inexplicably popular, to the point where Janetti was able to package the concept into an animated series for HBO Max. It should surprise nobody to hear that Janetti himself will voice Prince George.

"Who does your filler, Stormi? I need a person in LA."

In May, I wrote a thread of some of Janetti’s more egregious posts, especially those directed at Meghan Markle, arguably his most beloved target, with the intention of writing something up at a later date when the topic felt a little more relevant. Without warning, that thread suddenly started getting a hell of a lot more RTs this week. A quick investigation revealed the reason: Janetti, who hasn’t posted on his Instagram page since June 2nd, had gone on a deleting spree. No fewer than 54 posts were suddenly gone from this account, including a number of deeply misogynistic attacks on Meghan as well as her infant son, Archie. Posts that seemed to vanish in a puff of smoke and regret included ones that pushed the insidious fake pregnancy conspiracy that plagued Meghan for months, general slut-shaming, and one where he called Meghan ‘cheap.’ This is but the tip of the iceberg, and posts he hasn’t deleted (yet) are often just as nasty. On top of frequently attacking Meghan as a cheap homewrecker actress, Janetti has a particular soft spot for calling Camilla Parker-Bowles a horse. He also faced criticism for making fat jokes about five-year-old Princess Charlotte, which led to further deletions.

I note that these two especially gross ones are gone. I guess slut-shaming & attacking baby were a bit too much for his current HBO deal? pic.twitter.com/RKix74GPci

“I see Camilla’s not taking any chances.”

“So… are you just gonna be this weight forever now?”

Janetti is one of many people who found a profitable new side-hustle by suddenly becoming interested in the British royal family the moment a mixed-race American actress entered the scene. There are a scary number of media talking-heads who, when they run out of transphobia to spew, love to single out Meghan as the 21st century Medea. What Janetti has done is nothing new. Satire of the royals is a key part of democracy and, when done well, can be a potent tool. Just watch old clips of Spitting Image from the ’80s to see truly scathing humor directed at the old House of Windsor. Is there a way for a writer to turn a literal child into a conduit for jokes about the royal family? I imagine it can be done, but Janetti’s skills are sorely lacking. 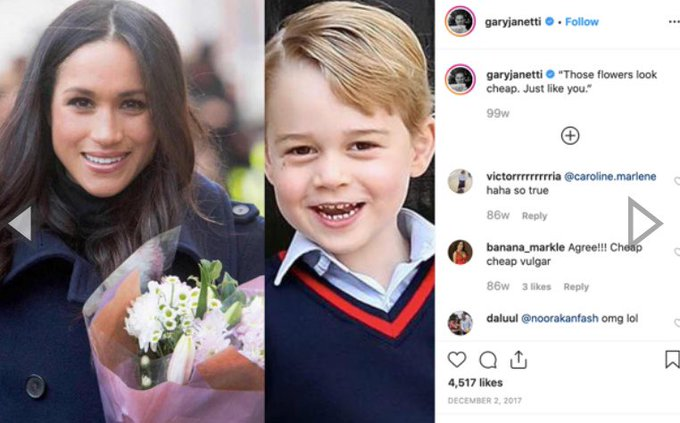 Prince George by way of Gary Janetti is essentially a Real Housewife; a witless embodiment of garden variety misogyny given a barely-visible sheen of self-awareness through copious use of the word ‘f**k’ and the occasional reference to Beyoncé. This George seems to hate everyone but is especially vile towards women, be it his younger sister, his mother, his aunt, or his step-grandmother, all of whom are attacked with disdain that is given a justifiable defense through its sloppy labeling as ‘satire.’ See, it’s funny to call a woman ‘trash’ or mock a toddler for getting fat because it’s not a grown man with an HBO Max deal saying it. It’s a child. Isn’t that hilarious? As a ’90s kid who grew up on South Park, I’m no stranger to foul-mouth kids or the instinctive laughter elicited from such a concept, nor am I unfamiliar with close-to-the-bone humor that aims for caustic over gentle. It’s hardly a surprise that a man who used to write for Stewie Griffin would go down this unimaginative creative path, but it doesn’t make his ham-fisted attempts any funnier or more cohesive.

Satire punches up. It makes you laugh at first then demands that you pay attention, confronting you with an issue or fear that you probably don’t want to confront. There’s a reason so many of the most effective pieces written by The Onion elicit anger in their intended targets. I often see Janetti’s work defended with comparisons to the Tumblr blog Suri’s Burn Book, of which I was a big fan. The major difference between the two is that Suri’s Burn Book had a specific intent. It was designed to dissect the unnerving cult of fascination that had sprung up in gossip culture around the children of celebrities and the insidious nature of the tabloid industrial complex, all though embodying a child who, at the time, was elevated to near-mythic status by both the media and her parents (and, you know, Scientology.) Janetti’s work lacks intent and appropriate targets. It’s just post after post of a 54-year-old man pretending to be a child so that he can spew the mundane level of misogyny that both the general public and the royal media already deal in. There’s nothing daring about treatment Black women like dirt. Indeed, it’s probably the safest choice any white dude comedian can make.

“Is that the stick from up Mum’s arse?”

There is no defense of punching up with Janetti’s humor because the jokes are so lazy and rely almost entirely on tired tropes. You can talk all you want about how rich and famous and untouchable women like Meghan are but that does not carry much weight when, for the past four or so years, she’s been the endless target of abuse related to her race, gender, nationality, and relationship. There’s no satire to be found in doing exactly what everyone else is saying, particularly when you do so on a social media platform then allow your comments section to be polluted by further abuse, as happened frequently on Janetti’s anti-Meghan posts.

“How the fuck are you still pregnant?”

Janetti has turned this cycle of weak satire and misogyny into his new career. It has opened up job opportunities and a renewed sense of fandom for him. It made him famous, won him many celebrity fans, and saw him be celebrated for turning a literal child into his mouthpiece for misogyny, F-bombs, and Lisa Rinna name-drops. This is his career now, and frankly, I think he knows it’s at stake. Why else would he suddenly have a mea culpa moment and go on a deleting spree with some of those more upsetting posts? HBO Max bought Janetti’s show based on his account, sexism and all, so it would be rather ignorant of them to make a sudden U-turn should Janetti’s lack of humility prove too messy for them to deal with. 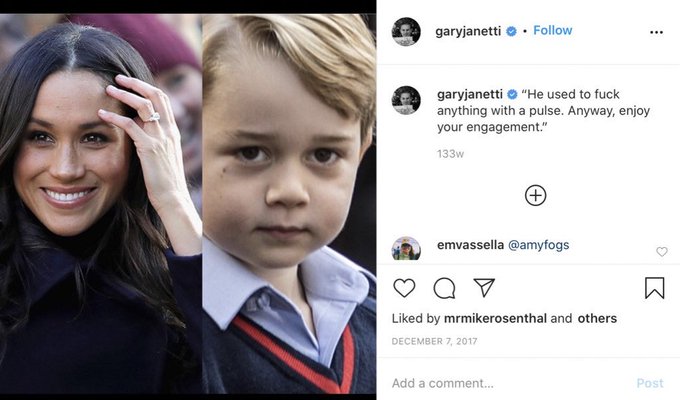 Gary Janetti is but one aspect of a more insidious problem, but his current attempts to whitewash his own bullsh*t in the hopes that it won’t affect his career of ‘liberal’ image exemplifies the lack of tangible labor the entertainment industry wishes to commit to when it comes to real social change and the destruction of white supremacy in Hollywood. Remove all the blackface comedy episodes, sure, but consider just how many people had to approve those episodes before they made it to air and how many of them were people of color. Think of how ceaseless racism and misogyny is repackaged as an adorable satire for the paying masses because white men get to dilute the entire concept of satire until it is unrecognizable. Audiences are increasingly impatient with men like Janetti declaring their dull hatred of women, especially women of color, to be ‘just a joke.’ I wonder if he’s aware of why, or if protecting the bottom line is a more important priority to him right now.