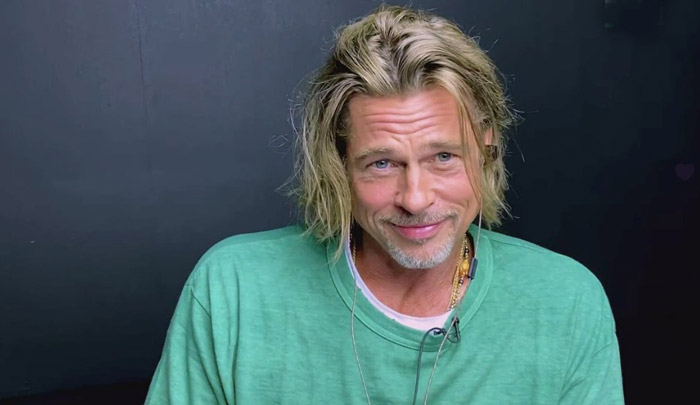 Brad Pitt And Jennifer Aniston Reunited ... And It Was Weird

Table Reads for charity have been a growing trend over these quarantimes. They are the gift that keeps on giving, not only in donations but also in thirst, nostalgia, fresh laughs, and now a long-awaited onscreen reunion. Last night, a slew of A-listers joined forces for Dane Cook Presents Feelin’ A-Live: Fast Times at Ridgemont High, which benefitted Community Organized Relief Effort and REFORM Alliance. Among the big names participating were former husband and wife Brad Pitt And Jennifer Aniston, paired in roles that led to one wild Zoom scene.

Stepping in for Judge Reinhold and Phoebe Cates, Brad Pitt played Brad Hamilton while Jennifer Aniston played Linda Barrett. You know what that means? The iconic scene of poolside fantasy and getting caught with a hand in the pants was given to the two stars whose once-intertwined love lives have fascinated tabloids for decades.

This was the first time the two performed together since their 2005 divorce. Joining in on this ribald reading were Dane Cook as Mark “Rat” Ratner, Morgan Freeman reading stage directions, Julia Roberts as Stacy Hamilton, Ray Liotta as Mr. Hand, John Legend as Charles Jefferson, Henry Golding as Mr. Vargas, Jimmy Kimmel as an assortment of smaller roles, and Matthew McConaughey as Mike Damone. While Fast Times alum Sean Penn did participate, he did not reprise the role of stoner Spicoli. He played the small part of delivery driver while Shia LaBeouf stepped in with a spliff and without a shirt.

“hi aniston”
“hi pitt”
“how you doin?”
“Good honey, how are you”
“I’m alright”
Not me freaking out.#FastTimesLive pic.twitter.com/VbHtU4aIZX

Brad Pitt and Jennifer Aniston are singlehandedly saving 2020 for me #FastTimesLive pic.twitter.com/dKKB299dEn

jen is the only one dressed as the character. #FastTimesLive pic.twitter.com/42IlznF4Uk

Undeniably the best thing to come out of 2020 and how cool is Ray Liotta!!#FastTimesLive pic.twitter.com/FLbjqyMMKo

Love for Shia Labeouf increasing by the second #FastTimesLive pic.twitter.com/WaB6J1D0Qy

Julia and Matthew are basically all of us, rn. #FastTimesLive pic.twitter.com/9q5wBBqqdG

Brad Pitt for the fucking W. #FastTimesLive
My hero. So game. So much fun. Please donate to see more. TEXT CORE to 707070 pic.twitter.com/QaFYv5oWyp

They’re using the original script instead of the movie script.

“Learn it. Know it. Live it” was an ad-libbed line #FastTimesLive @CoreResponse

This was hilarious and wonderfully awkward. 😂🤣#FastTimesLive