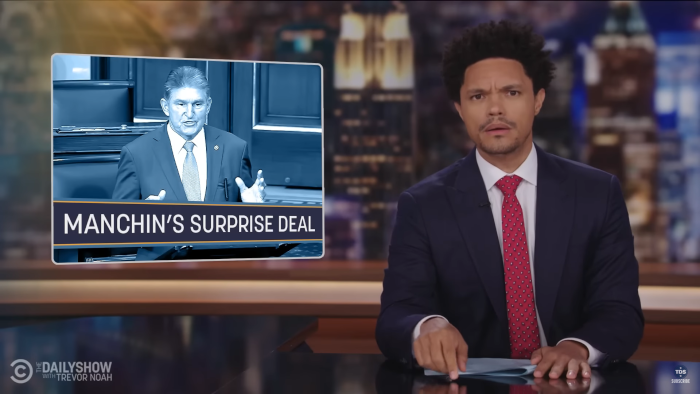 In a move reminiscent of a pro-wrestling match, Joe Manchin has turned face! To those unfamiliar with the term, a “face” in wrestling is a “good guy.” A “heel” is a “bad guy,” which is what Manchin has been so far. He’s gone out of his way to torpedo the Democrats’ agenda. But now, before Senators retreat to their lake houses for a month, Manchin has charged in to take a steel chair to the faces of their Republican rivals! Unless someone else waiting in the wings decides to derail everything yet again.

Trevor Noah reacted to the sudden shift on the newest episode of The Daily Show. He struck a tone of surprise, excitement, and cautious optimism. Unfortunately, that’s the most that Democrats can currently muster. That’s the reality we live in. The Democratic Party has been plagued by infighting. Despite having control of Congress, the Senate, and the Presidency, they have faced an uphill battle. Manchin’s face turn has been the first positive outcome they’ve had in a while.

That said, they still can fail. Democrats have not instilled a lot of confidence in their constituents. Depending on who you ask, they are either doing the best that they can or failing miserably. The truth likely falls somewhere in between. That won’t stop people from making up their minds either way. Public perception is one of the Democratic party’s biggest problems, which is ironic, given what Republicans are openly doing.

Having Manchin’s support is great. Whether that will turn this bill into a slam dunk for Democrats is yet to be seen. So get those hopes up! But not too up!

← Will Smith Releases Video Apologizing for Slapping Chris Rock | Alicia Vikander Out as 'Tomb Raider,' Krysten Ritter In for the 'Orphan Black' Spinoff →