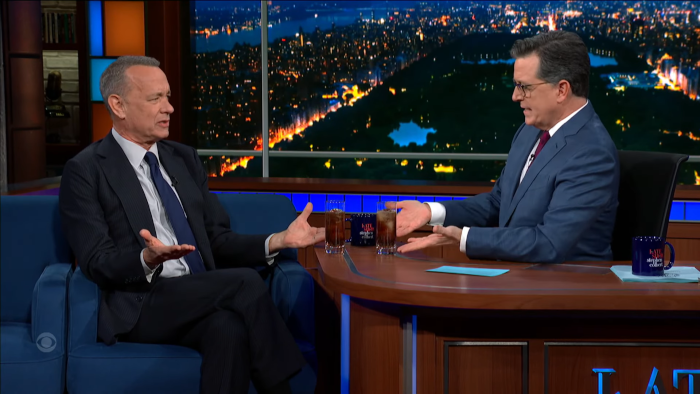 I’ve been a bartender for a long time. During that time, I dealt with some odd requests. No matter how odd, I always encourage them. Do you want ice cubes in your red wine? Hell yes. Coke in your red wine? Why not? Other requests I can’t recall that don’t include red wine? Oh, you better believe they exist. At the end of the day, I want people to enjoy their drinks. If Tom Hanks came up to my bar, likely at intermission, and asked for the drink he gave Stephen Colbert, I wouldn’t have flinched.

Hanks took time from blasting critics of nepo babies to drop by The Late Show with Stephen Colbert. He recounted a time when he and his family were having a night out, and he found himself mixing his Diet Coke with some champagne. His family was in disbelief until he let them try it, and their minds were changed. AKA Chet loved it, and Tom just ran with it.

The Man Called Otto star made a couple of “Diet Cokagnes” for Colbert, and they seemed to be a hit. It’s probably at least a little refreshing. That said, I’ve done shows where you get drunk with the audience. When you’re onstage, adrenaline is pumping. Something nasty may taste incredible. Stephen is also a very gracious and welcoming host. Though, the true answer could be the simplest: Chet was right.


← Richard Linklater Signs the Next Mr. Big Deal to a 20-Year-Movie Project | 'The Walking Dead' Universe Might Finally Be Coming to an End →