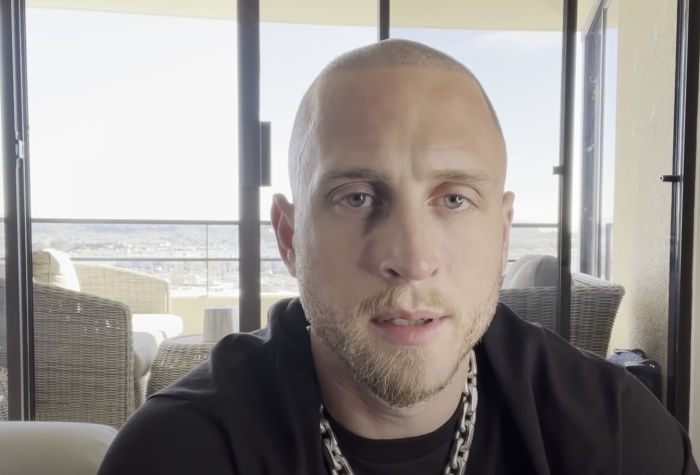 Chet Hanks Has Clearly Been Seeing a Therapist

Chet Hanks started a YouTube channel this week to talk about himself and his apparent attempt to turn his life around. There is no Jamaican patois, he doesn’t attempt to spread any anti-vax misinformation, and he speaks earnestly for 13 minutes to the question that most people want to know about him: “What was it like growing up the son of Tom Hanks?”

He doesn’t come right out and say it explicitly, but therein lies Chet Hanks’ biggest issue: The thing that most people want to know about him has very little to do with him and almost everything to do with his famous father. I’ll grant that such an experience might give a person a complex.

In fact, he relays a story about meeting George W. Bush at the age of 14, and having the President of the United States ask him, “What’s it like growing up the son of a famous person?” Chet says that it was “complicated,” and he thinks that the fact that George W. Bush — the son of another President — could understand his experience is the profound takeaway from the anecdote. No, the most telling part of that story is that he met the President of the United States, and George W. Bush didn’t ask Chet about himself. He asked him what it was like to be the son of Tom Hanks.

I could see why that might suck. Different people deal with that in different ways. I’ve heard both Colin Hanks and Jason Ritter speak about it at length in various podcasts, and while both have expressed a lot of pride in who their fathers are, and profound gratitude for the privileges it has afforded them, they both also know that they’re going to spend their entire lives in the shadows of their dads. You can either own it and do your best to live up to it, as they have, or you can run away from it, which is what Chet says that he has tried to do.

He admits that he was very insecure about growing up in a privileged environment, in a bubble, and that shame manifested itself as anger (Chet has clearly been seeing a therapist). “I felt like a little f**king p**sy rich kid who didn’t deserve all this shit — it was an avalanche of feeling worthless, feeling unprepared … I internalized all the shame projected onto me … which led me to run as far in the opposite direction of my upbringing as I could go to make up for it.”

That’s valid. Internalized shame is a much better explanation than the one he gave earlier in the video, where he had not yet completely let his guard down, and where he was still injecting some toxic masculinity into his explanation, suggesting that he developed a lot of resentment and anger because people hated him growing up because they made assumptions about him that he was a spoiled, rich, entitled brat.

I won’t speak for everyone, but that is the exact opposite of what I would automatically assume about the son of Tom Hanks. Regardless of their financial status, kindness typically begets kindness, and that’s what we have seen at least in regard to Colin Hanks, and presumably Elizabeth Ann and Truman Hanks. If I had seen Chet Hanks on the street, and knew nothing else about him other than who his father is, I’d have assumed he was a good soul.

Earlier in the video, Chet also suggests that people hated him and were jealous because he had, uh, “the factor.”
“If you have the factor, the X factor, you’re going to encounter a lot of jealousy and resentment.” Here’s the soundbite that is making all the headlines because the Internet is obviously going to want to center the story on Tom Hanks and his supposed failures as a father.

“I didn’t have a strong male role model to tell me that. Like, ‘Hey bro, f**k these people. They’re just jealous of you. They’re trying to throw their shade at you because they’re jealous.’”

Here’s Chet: If you want to watch him fumble through an explanation that’s not fully true, watch the first eight minutes. If you want to watch Chet fully come clean and cast aside all the jealousy and x-factor bullsh*t and admit that his anger came from internalized shame, jump to the 10-minute mark. If you want to skip the video, make your own assumptions about what is in it, and mock or ignore his efforts to process why he’s been such an asshole for the last decade, you’re free to do that, as well.