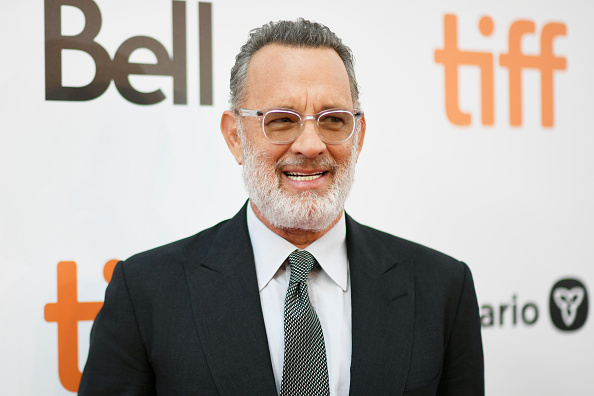 It’s finally happened! After three seasons and 30 episodes, Connor Ratliff has spoken with Tom Hanks, and far from being awkward, the episode was a pure delight.
For the unfamiliar, Connor Ratliff hosts a podcast called Dead Eyes. Over 20 years ago, Ratliff auditioned for Tom Hanks’ Band of Brothers, and he was ultimately rejected for a small role on the project because, as Ratliff heard from his agent, the nicest guy in Hollywood had said he had “dead eyes.” The moment, for obvious reasons, has stuck with Ratliff, so much so that it initially derailed his career for many years, over a decade of which he worked in a Barnes and Noble. Ratliff eventually joined UCB and is now a working actor (The Marvelous Mrs. Maisel, Search Party) and good friends with Ben Schwartz, among others, but that experience was so significant to Ratfliff that he eventually started a podcast to get to the bottom of it and perhaps exorcise it from his consciousness.

On paper, it sounds kind of pathetic, but it’s not: Ratliff uses the experience of being rejected by Tom Hanks to explore not just the audition process but also rejection, failure, insecurity, the nature of celebrity, the nature of storytelling, and, well, Band of Brothers. Over three seasons, Ratliff has spoken to several other actors who were rejected for Band of Brothers (Seth Rogen, David Krumholtz, Zach Braff, Adam Scott); he’s talked to people who have worked with Tom Hanks (including the kid who played the young Tom Hanks character in Big); he’s talked to people who were actually in Band of Brothers (Ron Livingston); he’s talked to fans of the podcast, like Damon Lindelof and Rian Johnson; and he’s even talked to Tom Hanks’ son, Colin, who is also a big fan of the podcast.

As Tom Hanks tells it on the podcast, it was his son Colin and his daughter Elizabeth who told him about Dead Eyes, and so Hanks emailed Ratliff, and after Ratliff confirmed it was actually Hanks’ email address and not a practical joke, they arranged to meet. I would encourage everyone to listen to the episode, but I’d also suggest listening to a few earlier episodes first just to get a feel for the podcast (I’d recommend the first episode, the Damon Lindelof episode, and the Colin Hanks one).

To his credit, Hanks was terrified about hearing the story, and though he could not remember the event — again, it was a nothing moment in the life of Hanks, but it obviously had a lasting impact for Ratliff — Hanks generously let Ratliff go through the entire ordeal. You could almost hear Hanks hiding his face behind his hands. Hanks tells a few stories from his career about times he has been rejected, and other times in which he has been responsible for firing people, and one particularly painful story where Hanks spent a pleasant half-hour on the phone with a director who had hired him for a film only to receive a call the next morning from his agent mysteriously telling him that he’d been kicked off the project.

The story he told that I think was most germane to the podcast was about his experience on Big and working with Penny Marshall. He said that he thought that because he was the star of the movie, he’d be able to watch the dailies, but when he went to do so, Penny Marshall kicked him out. “You can’t be here,” she said. “You can’t be here. You can’t watch dailies,” and when Hanks said that he thought he should be able to see the dailies because he was the lead in the movie, she told him, “No, no you don’t. Because in this room, we have to talk uncensored. We are going to say terrible things about you. And the lighting and the props and the dolly movement, and you … we have to say all of these things, and if you are here to hear them, it’s really going to screw you up.”

That makes total sense. Also, for the record — after this long, informative, and very pleasant conversation — Hanks also agreed to keep Ratliff in mind for any future projects for which Ratliff might be suitable. So maybe he didn’t get Band of Brothers, but Ratliff did get a huge podcast out of it, and maybe he’ll end up getting an even better role in a future Tom Hanks movie. If he does, I hope there’s a podcast episode about it.