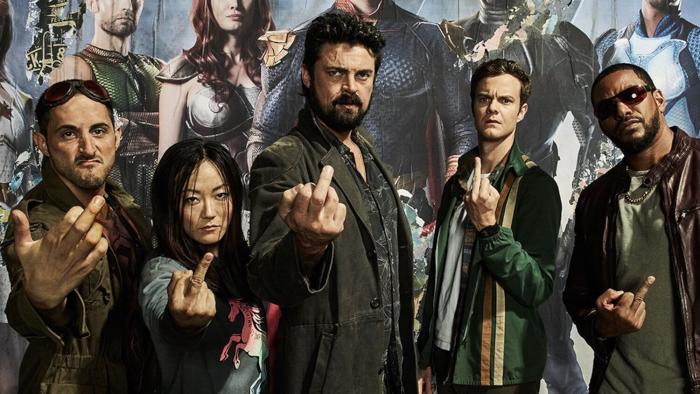 The September Streaming Guide: The 38 Movies and TV Series To Look Out For this Month

September 1st
McDonald & Dodds Season 1 (Britbox) — A shy and enigmatic Detective Sergeant is partnered with a wildly ambitious Detective Chief Inspector to solve crimes in the historic city of Bath.

Color Out of Space (Shudder) — A secluded farm is struck by a strange meteorite that has apocalyptic consequences for the family living there and possibly the world. With Nic Cage and Joely Richardson.

Away Season 1 (Netflix) — Hillary Swank stars as an astronaut who leaves her family behind for three years. A weepy from exec producer Jason Katims. Also starring Josh Charles.


Noughts + Crosses Season 1 (Peacock) — Based on a novel series set in an alternate history where Black people rule over white people.

The Babysitter: Killer Queen (Netflix) — Sequel to The Babysitter directed by McG and starring Bella Thorne and Robbie Amell.

The Duchess Season 1 (Netflix) — Semi-autobiographical Katherine Ryan comedy series about a single mom trying to have another baby before her biological clock runs out.

September 14th
The Third Day miniseries (HBO Max) — A series about a man and a woman who make separate journeys to a mysterious island off the British coast. Starring Jude Law, Katherine Waterston, Emily Watson, and Paddy Considine.

We Are Who We Are Season 1 (HBO Max) — Two American kids who live on a U.S. military base in Italy explore friendship, first love, identity. With Chloë Sevigny, Kid Cudi, Jack Dylan Grazer, and Alice Braga.

September 15th
Don’t Forget the Driver Season 1 (Britbox) — Set in Bognor Regis, it’s about a depressed single father who works as a coach driver and discovers an asylum seeker after taking a coach party across the channel. Stars Toby Jones.

September 16th
The Devil All the Time (Netflix) — Sinister characters converge around a young man devoted to protecting those he loves in a postwar backwoods town teeming with corruption and brutality. With Robert Pattinson and Tom Holland.

September 17th
Spiral (Shudder) — A horror movie about a same-sex couple who move to a small town with their teenage daughter.

Departure Season 1 (Peacock) — Conspiracy series about the mystery of a passenger plane that vanishes over the Atlantic Ocean. With Archie Panjabi and Christopher Plummer.

All In: The Fight for Democracy (Amazon) — Documentary examining the history and current activism against voter suppression. With Stacey Abrams.

Tehran Season 1 (Apple TV+) — A Mossad agent embarks on her first mission as a computer hacker in her home town of Tehran. With Niv Sultan, Shaun Toub, and Menashe Noy.

A Wilderness of Error (Hulu) — Based on the Errol Morris book, about Jeffrey MacDonald, an Army surgeon who was accused of murdering his wife and two daughters on February 17, 1970.

September 30th
American Murder: The Family Next Door (Netflix) — Documentary examines the disappearance of Shanann Watts and her children, and the terrible events that followed.


← Would You Eat This PBJ Sandwich? Because I Am Outraged | 5 Shows After Dark: 'Transplant' Premiere NBC, '16 and Recovering' Premiere MTV →