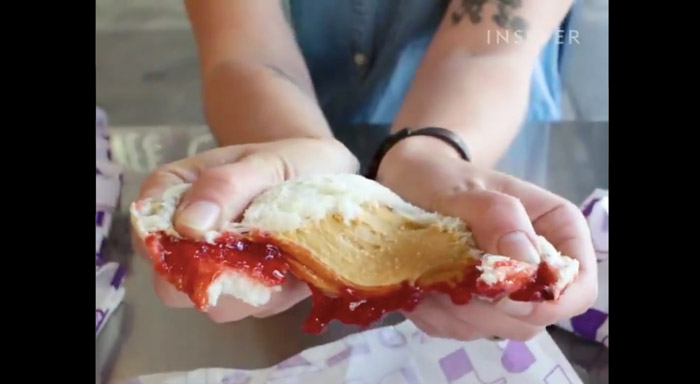 Would You Eat This PBJ Sandwich? Because I Am Outraged

It’s that time again: WRATHFUL FOOD DEBATE. Previously in this unofficial series, we have talked about cakes that look like not-cake, shocking rice-cooking tactics, and how to make the perfect grilled cheese sandwich. Today, we’re talking PBJs.

In America, the peanut butter and jelly sandwich is a staple of childhood and—frankly—college years, and drunken late nights for all of adulthood. Between two slabs of white bread, the smear of pb and the slam of j approaches something truly divine. It reminds us of summer days, joyful youth, and is a delicate blend of salty and sweet. When done right, it doesn’t even get on your fingers, but brings the flavor to the very edge!

This moment of nostalgia brings us to the reason I’ve gathered you here.

What the hell is this:

This shop only makes peanut butter and jelly 😲 pic.twitter.com/etp6cCBnzZ

PBJ.LA serves fancy PBJ, with house-made nut butters and jams. This includes such swanky options as espresso peanut butter, apple jam with angostura bitters, curried cashew butter, and basil cherry tomato jam. Admittedly, part of me feels a bit affronted by the attempted elevation of PBJ, because the simplicity is not a glitch! IT’S A VIRTUE! Still, if Angelenos want to pay $8 for a fancy PBJ, that’s their business.

My big gripe comes with the construction here. There’s no butterknife employed. No gentle but firm slathering of the peanut butter. No coaxing of the jelly/jam so it reaches near the ends, but not so far it will drip. Nope. They use a d*mn ice cream scoop to slop on PB that looks suspiciously liquidy and a glop of jam. The ratio of jam and PB to bread is thrown WILDLY out of whack. It’d make an explosive mess on your fingers. Except, then they put the bread in a device to slice off the crust and create a “gourmet Uncrustable.”

This is not classic PBJ. This is capitalism telling us we need to pay more for less. The crust gives texture! Plus—if my mother is to be believed (and don’t you dare contradict my mother)—the crust gives you curly hair! The crust gives us so much and it’s just DISCARDED! I watched this video jaw-dropped, wondering where all that crust and clinging peanut butter and jam went! Do they just THROW IT OUT? In this economy! Do they combine it all into a blender and make some other flashy treat that cashes in on our childhood nostalgia and grown-up disposable income?

Does this sandwich design make sense to you? If so, EXPLAIN YOURSELF.

← Austin School of Film Teaches Horror SFX Makeup With Play At Home Series | The September 2020 Streaming Guide: The 38 Movies and TV Series To Look Out For this Month →